My Heart Can't Beat Unless You Tell It To

Well, what would you do if you had a close family member who suffered from a life-threatening illness and was almost totally dependent on you for their survival? Unless you're a total monster, my guess is that you'd do everything in your power to help them in any way. Now, what if the illness in question was vampirism, and what you were required to do was go out and kill people in order to provide them with a steady stream of blood for sustenance? That's the question posed by “My Heart Can’t Beat Unless You Tell It To,” a grimly fascinating low-fi debut from writer/director Jonathan Cuartas. The horror here comes less from the amount of bodies and gore on display than it does from that point when family ties begin to choke.

In some nondescript suburb, a trio of adult siblings live in a house whose design motif is a combination of dried blood and existential despair. The center of the household, at least in terms of importance, is Thomas (Owen Campbell), who is the youngest of the three and, it seems, a vampire—he doesn’t leave the house, he keeps nocturnal hours and yes, he subsists on blood. While his sister Jessie (Ingrid Sophie Schram) homeschools and cares for him when she isn’t working shifts at what may be the town’s only restaurant, brother Dwight (Patrick Fugit) gets the uglier job of going out and procuring victims—mostly homeless people and day laborers. Dwight kills them and brings them back to the house so that he and Jessie can drain the blood for Thomas before he buries them in the backyard and sells their meager possessions at a thrift store.

We don't know how long this situation has been going on, but it's clearly been a while. And although Dwight clearly loves and cares for Thomas, the need to go out and kill people in order to keep him alive is beginning to wear heavily on him. His only apparent outlet from all of this is his occasional visits to a sex worker (Katie Preston) operating out of the local motel and he idly thinks about the two of them just packing things up and heading off to Miami. Thomas also appears to be wearying of things as well—he wants to go beyond the front door of the house to meet the local kids that he can occasionally hear outside, and petulantly knocks his bowl of blood to the floor when he is told that this cannot happen. (“Do you have any idea what we do to get that blood?”) Jessie, on the other hand, is determined to keep things going the way that they have been, possibly because she's been doing it so long she can't imagine any other way of living. This puts the seemingly close-knit siblings on a collision course with each other and the results are inevitably messy for them all, both figuratively and literally.

“My Heart Can’t Beat Unless You Tell It To” is, as I have noted, ostensibly a vampire film but it lacks the visual splendor and erotic thrills one normally associates with the genre. This is closer in tone to movies like George Romero’s masterpiece “Martin” (1978), the Nicolas Cage hallucinatory black comedy “Vampire’s Kiss” (1989) and the bleak Swedish import “Let the Right One In” (2008), films that stress psychological horrors over fangs in necks and which approach their situations in ways that make you question whether the characters in question actually are vampires or not. It doesn't dwell too heavily on the details of the vampire mythos—there's no backstory explaining how Thomas came about his condition or how his siblings hit upon their particular method of caring for him—but that's not really the point of Cuartas’ film. He's more interested in the psychological pressures that can bear down upon well-meaning people who are forced to put their own lives on hold in order to care for a family member, and who are torn between their dreams of breaking away at long last and their guilt over even thinking about such a thing in the first place. (The sensation of being trapped, even amongst loved ones, is accentuated by the decision to shoot the film in the more restrictive academy ratio.)

In other words, those who come to this film having heard its basic premise and expecting the usual vampire thrills are likely to be a bit frustrated—the tone is unremittingly bleak (plenty of blood is shed throughout, but it's presented in the least glamorous and most visually drained manner imaginable) and its refusal to answer basic questions about the whole conceit may not play well with some viewers (especially one particular shot choice towards the end that renders a potentially definitive answer to one key question oblique). However, those not so hung up on seeing the same old genre tropes play out may well find themselves intrigued by Cuartas’ concept, his meticulously staged execution of the material, and the performances from the three leads. The cast not only manages to pull off their tricky roles by engendering a certain sympathy despite the things we see them do, but also convincingly enact a family unit that has perhaps been together a little too long for everyone's own good.

“My Heart Can’t Beat Unless You Tell It To” does contain a couple of awkward moments (most of them karaoke-related) and could probably use a couple of moments of humor to help lighten the otherwise heavy mood. I also confess that while I'm more than fine with films ending on an ambiguous note, I came away from this wishing that there had been a little more resolution in regards to certain matters. Nevertheless, Cuartas' film provides a generally interesting spin on both the vampire mythos and more typical dysfunctional family dynamics. And while I can't promise it will provide you with a good time at the movies, at least in the conventional sense, I can tell you it's one that's likely to stick with you for a while.

Now playing in theaters and available on VOD and digital platforms. 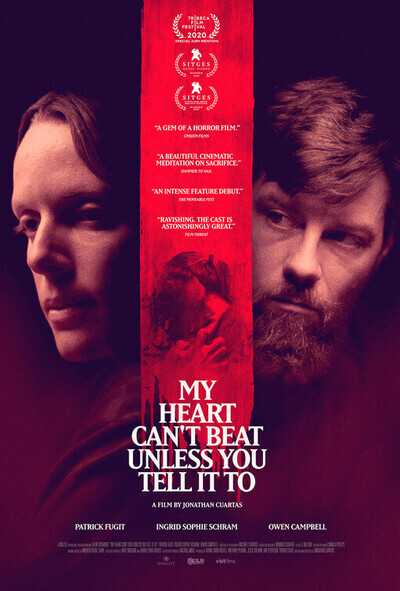