The original “My Big Fat Greek Wedding” was a fluke. A charming, warmhearted fluke, but a fluke nonetheless. It was broad and sitcom-y but it resonated with a wide array of moviegoers, despite the peculiarities of its cultural specificity, and it made a mind-boggling $369 million worldwide in 2002.

Fourteen years later, we have a sequel that it seemed nobody in particular was clamoring for, with a title that’s as uninspired as the premise itself: “My Big Fat Greek Wedding 2.” Yes, there is another big, fat, Greek wedding.

Whereas the first film worked mainly through the massive likability of its star/writer, Nia Vardalos, this sequel (which Vardalos also wrote) makes the mistake of relegating her to a supporting role in one of way too many interwoven subplots, none of which are particularly compelling.

This time, Vardalos’ sweetly self-deprecating Toula must manage the chaos that’s thrust upon her from a multitude of members of her wacky family. In the most contrived of these dilemmas, it turns out that Toula’s parents, Chicago restaurant owners Gus (Michael Constantine) and Maria (Lainie Kazan), aren’t actually married after all. The priest back in Greece never signed their marriage certificate 50 years ago. This means there has to be—you guessed it—another big, fat, Greek wedding.

But wait! Despite constantly harping on every young woman she meets about the importance of getting married, Maria begins to question whether she wants to be someone’s wife anymore. And yet, we know from the title that this problem will be resolved, so there are no real stakes.

At the same time, Toula is having a hard time maintaining the spark with her own husband, Ian (John Corbett, more milquetoast than ever), the WASP-y dude whose arrival in Toula’s life created a culture clash in the first film. She’s also devastated at the prospect of her 17-year-old daughter, Paris (Elena Kampouris), leaving home and heading off to college. Meanwhile, Paris suffers from her own romantic angst as she prepares for prom and tries to deflect the pressure to date a Greek boy.

In one particularly embarrassing scene—which is emblematic of director Kirk Jones’ over-the-top tone throughout—Paris’ entire family shows up at her school’s college fair to ensure that she stays in town and goes to Northwestern. They bring homemade spanakopita. They pressure the admissions representative. They mug wildly for group photographs.

Over and over again, this is the level of humor in “My Big Fat Greek Wedding 2”—this is the shrill note it hits. It isn’t enough to show that Toula’s family is (supposedly) lovably embarrassing. Gags get piled upon gags with relentless frenzy and results that are overbearing rather than uproarious. You can rely on every character to behave exactly the same way every time, regardless of the situation, and that way is usually obnoxious. Even a character who comes out as gay—which, in theory, should be an important moment—arrives out of nowhere and carries zero emotional heft. And then every once in a while, John Stamos and Rita Wilson (a producer on the film once again) show up as husband and wife, ostensibly because they’re Greek and they’re doing due diligence.

The one figure we can rely on to shake things up through the sheer awesomeness of her bizarre presence is Second City veteran Andrea Martin as Toula’s thoroughly inappropriate Aunt Voula. Just the choices in her facial expressions and vocal intonations are good for consistent laughs. And man, for those few moments, does it feel good to laugh.

Vardalos’ choices—both on screen and behind the scenes—aren’t quite so easy to figure out. Ordinarily blessed with a pleasing accessibility and quick wit, here Vardalos has stripped this character she created of everything that made her endearing and turned her into a skittish, wound-up ball of codependency. Toula is a wife and a mother but more often behaves like a scared little girl as she spinelessly agrees to every whim and demand from her selfish, needy family.

Her script is a mess, and no amount of Windex can clean it up. 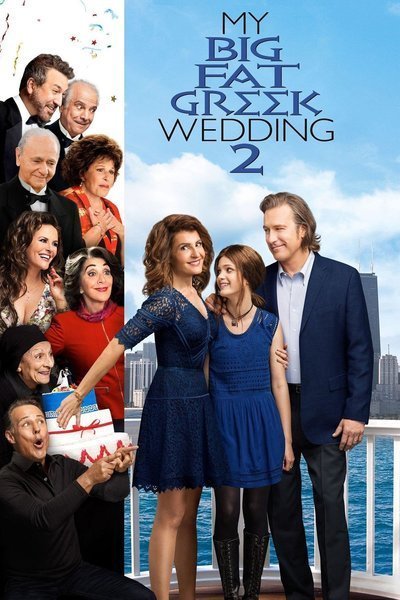 Rated PG-13 for some suggestive material.