“My All American” earns most of its single shiny star by wasting no time in confirming its outright mushiness. Its first scene involves Aaron Eckhart, aged to a Clint Eastwood-like stoicism with the emphasis on white caterpillar eyebrows, answering a poor reporter’s simple question about who his favorite All American player was, through his illustrious years of head-coaching the University of Texas to oodles of football victories. “Freddie Steinmark,” he says. “But he wasn’t All American,” replies the reporter. “No,” Eckhart pauses. “He was My All American.” This film is based on a true story.

For those who don’t take that titular line-drop as indication to head toward the nearest exits, “My All American” offers viewers a thoroughly shameless hero piece. The titular personal champ is that of Freddie Steinmark (Finn Wittrock), a perfect specimen of a high school football player in the 1960s who seems to just be a little too short for college football, but he still has pro ball dreams. Surely enough, with his teammate James (Juston Street) and his beau at his side (Sarah Bolger’s Linda), he makes it to UTexas, where he proves that his height is not really that much of an issue, and immediately impresses the legendary Coach Royal (Aaron Eckhart). Lacking the tobacco-chewing guff of every other clichéd coach in the movie, Coach Royal loves Freddie unquestionably, and never makes the viewer feel like Freddie has any obstacles to tackle.

With a lead character who proves just how gratingly unnatural perfectionism is to human beings, (especially non-fictional ones like Freddie), writer/director Angelo Pizzo eschews any sense of true conflict for 90 minutes so that we can see how great of a player he must have been: Freddie gives gleaming, hopeful handshakes any time he’s humbly upgraded in the squad by Coach Royal, himself a boring statue. “Fast Freddie” is the speediest player on the squad but won’t emotionally ditch his teammates. As a member of the UTexas, he’s the first one to arrive at the locker room in the morning, and the last one to leave, because he’s doing his studies. His shirt is always tucked in. He prays during montages. You spend the whole movie expecting him to die.

Sure enough, once “My All American” stops playing out like a grating montage with some football games mixed with shiny moments of Freddie Doing Good, as set to incessant Aaron Copland-esque fanfare, something bad happens. It takes about 90 minutes for “My All American” to take its true form as an homage to a football program, when UTexas ascended from a low record to the 1969 Cotton Bowl while Freddie had a personal battle off the field. During this, Pizzo’s film does not aim towards any rich emotional victory, but it does want to show Freddie getting a five-minute standing ovation. To a credit for which he deserves better gigs, Wittrock shows a commitment to Pizzo’s bizarre vision, going along with the film’s desire to feel like its script was found in a 50-year-old time capsule, as originally composed with a PSA’s squeaky cleanliness.

Oh, how fragile are these young American men who just want to wrestle over a pigskin and make mothers of their girlfriends. But be not fooled by its stalwart, magic hour machismo, “My All American” is very much a Nicholas Sparks-esque weepie about a man and his football team, with the same delusional romance about The One. Even its loving exchanges between teammates on the gridiron (affectionate nicknames like “Little Dink”) or in the locker room create a groaning comedy, as the story yearns to indulge a nostalgia for something that could have never existed like this, University of Texas lore be damned. But for those looking for a sports film of basic quality and genuine narrative, "My All American" is definitively useless. 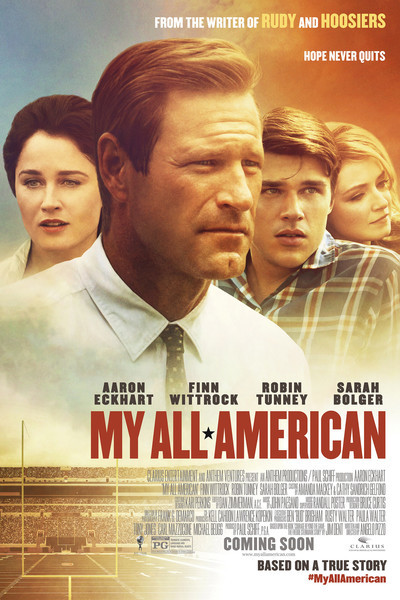