This film is screening virtually in over 70 cinemas now through Thursday, September 10th. You can find the full list of venues here.

“A complete and utter love affair with your blackness.” That’s how one of the interviewees in this incredibly enjoyable documentary describes the tenor of “Soul!” a U.S. public television arts and chat show that ran from 1968 to 1973. “Mr. Soul!,” as the title indicates, is not just about the show, but about the visionary that created it and, a little reluctantly, hosted it, Ellis Haizlip.

Haizlip was a theater nut who did groundbreaking work with the Howard University Players before moving to New York and bringing plays to Harlem audiences. He was one of those people who knew everybody—and, according to the reminiscences of some affectionate friends, would claim to know those that he didn’t, actually. “I gave The Beatles ‘Let it Be,’” one friend recalls him saying. “I said to Paul, ‘Let it be! Let it be!’”

His larger-than-life personality notwithstanding, Haizlip wasn’t eager to go on camera. But he knew his show was answering a need. This movie, directed by Haizlip’s niece Melissa Haizlip, opens with a montage showing just how oppressively lily-white American television was in the 1960s. “Soul!” was a remarkable counter to that.

Haizlip’s programming was not just innovative by the standards of that time—it’s shamingly innovative compared to the programming of today. One interviewee states that Haizlip and his show “did more for poetry on television than anyone.” The very phrase “poetry on television” today sounds as arcane as “fish on bicycle.” But the clips served up here—of the polemic provocateurs The Last Poets, Amiri Baraka backed by Pharaoh Sanders, the luminescent Nikki Giovanni, and many others—show just how gripping, engaging and movie televisual poetry can be.

Here’s another idea you can’t imagine becoming a reality today: two hours of Giovanni and James Baldwin just talking. Or: modern dance, choreographed by Geoffrey Holder. Or: the openly gay Haizlip asking Louis Farrakhan about his condemnation of homosexuality.

“Black culture is world culture,” Haizlip said. And the clips from the show—and seriously, can someone assemble the entire series and get it on streaming, or physical media somehow—reveal it as a phantasmagoria of Black excellence.

Stevie Wonder felt so at home on the set that he just went off, playing and singing long after the taping had officially wrapped. Greg Tate, the cultural critic who would be a great producer for a revival of “Soul!” were any broadcast or streaming entity want to get such an enterprise off the ground, observes that the only thing better than watching Wonder himself is watching his even more ecstatic audience.

Just as the show, in a sense, began as a response to Nixon’s America, it was Nixon himself who wound up squashing it. The paranoid president, lashing out at perceived enemies, found there was one that he, as chief executive, could inflict genuine damage upon, and that was public television. Budget cuts he backed ended up felling “Soul!” Haizlip, whose interest in provocation only went so far, didn’t fight for the show. But he continued to champion Black arts as a staff member of New York’s Channel 13. One hopes more than one viewer of the film sees “Soul!” as more than just a relic to be cherished, but as an inspiration.

Note: RogerEbert.com Publisher Chaz Ebert is an executive producer on this film. She had no influence on this review.

"Mr. Soul!" is screening virtually in over 70 cinemas now through Thursday, September 10th. You can find the full list of venues here. 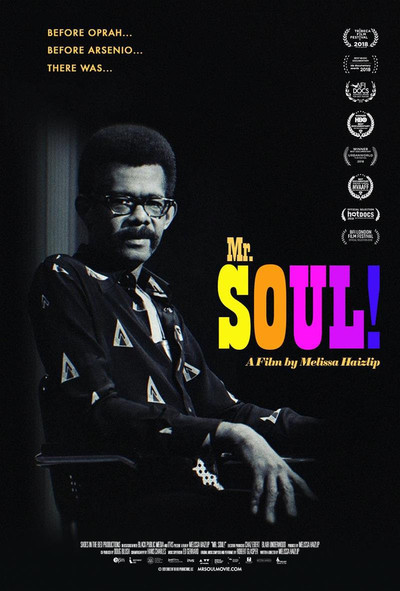 Ellis Haizlip as Self (archive footage)