I’ve long been a fan of Stephen King’s novellas, and some of them have been turned into great films in the past, including “Stand by Me,” “The Shawshank Redemption,” and “The Mist.” The master of horror’s 2020 collection If It Bleeds opened with a wonderful little ghost story called “Mr. Harrigan’s Phone,” which is now a Netflix original horror film from John Lee Hancock, the director of “The Rookie” and "The Blind Side." He brings the earnestness of those films to King’s ghost story and proves to be the wrong filmmaker for this project. “Mr. Harrigan’s Phone” needed a viciousness that Hancock eschews in favor of blunt commentary about dependence on technology that sounds about as in touch as that old relative of yours who will lecture you about why he’s never going to get a smartphone. Hancock’s adaptation, which he also wrote, takes forever to get going, and then seems almost afraid of its own dark themes of vengeance when it finally gets to them. An early engaging performance from the great Donald Sutherland and a consistently grounded one from Jaeden Martell keep “Mr. Harrigan’s Phone” from completely going dead, but you’re going to want to send this one to voicemail.

The wealthy Mr. Harrigan (Sutherland) hires a young man named Craig (Martell) to read to him because the old man’s eyes are going in his later years. He’s a deeply analog man who doesn’t own a TV or even a radio, even if he likes listening to his “Country Western” tunes in the car sometimes. He comes to life not just when Craig reads material like Heart of Darkness but when they discuss the themes after. It’s a formative friendship for Craig and a lovely final chapter for Mr. Harrigan, who clearly has stepped on a few people on his climb up the corporate ladder. He encourages Craig to be ruthless and decisive, whether it’s in standing up to a high school bully or approaching a girl he likes. He gives Craig confidence, and Craig gives him some late-in-life comfort.

And Mr. Harrigan gives him a lottery ticket too. When Craig gets $3,000 from his scratch-off gift, he decides to take some of that money to introduce the old man to the iWorld. At first, Mr. Harrigan refuses, until the kid points out how much the business savvy Harrigan can stay on top of the market and breaking financial news. It’s not long before Harrigan himself is hooked on his phone, allowing Hancock and Sutherland a truly eye-rolling speech about the danger of giving up reality for the life of a smartphone. As Harrigan goes on about how these devices will be used for fake news and misinformation (he’s “frightened by this gizmo”), the film devolves into a heavy-handed cautionary tale with blunt messaging that the source material didn’t need.

In its original form, “Mr. Harrigan’s Phone” works better as a conversation starter about justice and power than anything literal. You see, when the old man kicks the bucket, Craig puts his new phone in the casket with him, and, well, things start to happen. Without spoiling, Craig leaves messages for Mr. Harrigan that seem to impact the real world. What would you do with that kind of power?

The film version of “Mr. Harrigan’s Phone” needs to be a morality tale for its protagonist and viewer, a questioning of how far we’re willing to go to right the wrongs of the world. If Mr. Harrigan himself had the power that Craig ends up having, he would have used it in malevolent ways, and so this really should be a story of a young man facing a moral quandary about what to do with an impossible power. It becomes that, barely, in the final act, but it’s such a dull slog to get there.

Perhaps this is just another reminder that just because something works on the page doesn’t mean it will work in a film. Yes, there is a sense that this would have been stronger as an episode of an anthology horror show instead of a feature. There’s not quite enough meat on its bones in this form and it's tempting to blame that on the fact that it's based on a novella. And yet it also feels like a more ambitious filmmaker could have found that meat, expanding on its themes and concept instead of just weighing them down with moral posturing about tech. Someone else could have expanded the world of the novella, without such a straight face. There’s a lot of potential in the ideas that King plays with in “Mr. Harrigan’s Phone.” If only they had been given to a filmmaker willing to answer the call. 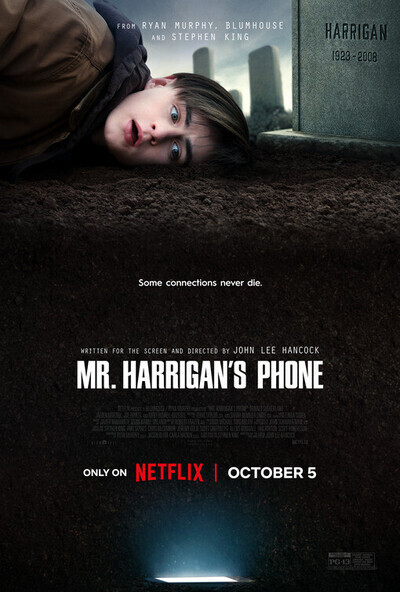