After the first five minutes of "Mother's Day" - after the shot of the blood spurting from the severed neck of the movie's first victim - I was ready to walk out. But no, that would have been too easy. I determined to stick this one out. I was part of a large crowd of Saturday afternoon moviegoers, some of them no doubt taking a break from Christmas shopping, and I wanted to see how this cross-section of Americans would react to the movie's images of vile and depraved sadism.

During the next 100 minutes or so, the "Mother's Day" audience witnessed a series of violent events, held together by the flimsiest of stories. The plot: A demented old woman lives in a shack in the woods with her two cretinous sons. Their entertainment is to capture unwary campers and torture, rape and kill them for the delight of their mother. In between, they behave like pigs. A typical dinner scene involves one of the sons shooting a can of pressurized cheese whip down his throat.

Near the beginning of the film (but after the first beheading), three young women, former college classmates, go camping in the woods. They are imprisoned inside their sleeping bags and dragged back to the shack, where they are assaulted, raped, cut up, beaten and forced to watch unspeakable acts. The mother cackles with glee. The actresses (?) scream relentlessly.

Later in the film, after one of the girls is dead, the two survivors come back for revenge. (This sort of "eye for an eye" conclusion is apparently a ghastly attempt at fairness on the put of the geeks who make these movies.) The girls get their revenge. In one sequence, one of the sons is stabbed through the throat with a car antenna and chopped in the crotch with a hatchet. His brother has a can of Drano poured down his throat, and is hit over the head with a television set. The audience can look in through the TV, screen as the victim is electrocuted.

How did the audience respond to this? Rather quietly, I thought. The cliché, of course, would be that the audience reaction consisted of laughter, loud talking back to the screen, and whoops of glee. Well, there were a few astonished laughs, especially during the Drano scene, but the audience was a good deal quieter than you might have expected. They seemed a little stunned. Maybe a little sickened.

So far there seems to be no end to the vogue for geek films. And there seems to be no limit to the inhuman imagery their makers are prepared to portray in them. "Mother's Day" is at least rated "adults only - 18 and up" by its distributor. It has no official rating from the MPAA - but if it had been submitted for a rating, it would no doubt have received an "R," permitting persons under 17 into the theater.

The question, of course, of why anybody of any age would possibly want to see this film remains without an answer. 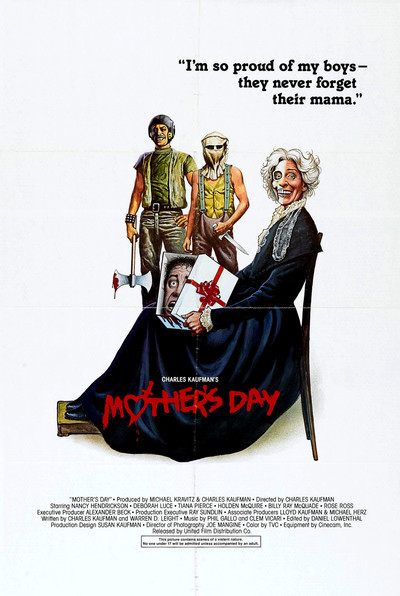