There’s something wrong with Wall Street analyst Richard Boca (Beau Knapp), the main character in the underwhelming horror drama “Mosquito State.” Not “wrong” like the puffy welts that eventually overwhelm Richard’s face, after he gets bitten, and then plays host to, a swarm of mosquitos. Those angry blemishes are at least metaphorically understandable since they confirm Richard’s prophetic warnings of a then-impending market crash (this movie takes place in 2007). Richard’s wrongness is also not limited to his moony body language and potent social unease, which are especially obvious whenever he interacts with his work colleagues, but also when he talks to Lena (Charlotte Vega), a kind and curious sommelier that Richard meets at a ritzy work party.

What’s really wrong with Richard is that he’s a boring monster. He’s too obvious to be unsettling, and too goofy to be pathetic. Who really cares about a well-dressed creep who skulks about like a young Mr. Burns, and talks about the world beyond his Central Park penthouse as if it were a hot plate he’s touched a few too many times? You have to want to suspend your disbelief to care about Richard, and unfortunately, the qualities that define him on a scene-to-scene basis are often a weird mix of tired clichés and vague insinuations. Richard’s monstrousness doesn’t appreciate with time either: he just becomes more ungainly and, well, wrong.

In case the movie’s title is too mysterious: “Mosquito State” is about what went wrong before the 2008 market crash. Richard and his prized algorithm apparently saw the writing on the wall, but his employers did not listen to him because that obviously would have been bad for their business.

And while Richard tries—and fails—to keep up appearances at work, he also fends off a mosquito infestation in his enormous apartment. Floor-to-ceiling windows, concrete slab walls, a working fireplace, the whole bit. Mosquitos swarm the joint by movie’s end, because that’s a good part of what’s supposed to be wrong with Richard.

That’s bad, I guess, because Richard needs some perspective in order to divine his “models”; otherwise, his eccentricities simply aren’t profitable. So Richard faces a surreal but essentially personal crisis, and finally realizes that he’s only so valuable to the people in his life.

This epiphany understandably depresses Richard, but more often than not, the makers of “Mosquito State” indulge Richard’s upset instead of giving it serious consideration. He pouts when asked if he’s following the Utah miners’ then-ongoing story: "No, but I know how these stories end.” Because of his knowledge of models and trends, right? And when Richard scuffles into his office, we follow him from behind, so that his hunch stands out, but also so that we’re not overwhelmed by the blotches on his face. Richard’s character is a special effect that’s used to low-key provoke viewers. It’s also handled with so much care that one can’t help but feel let down by the movie’s anticlimactic finale.

But before that: Richard’s mysterious relationship with Lena is most of what’s wrong with “Mosquito State.” Because according to Richard, Lena’s Dulcinea, waiting to be rescued from her unrewarding day job. Lena wants to study trends, too, and also isn’t repulsed by Richard, and because that’s all that he cares about, that’s most of what we see in her, too. They talk about corked wine, and he acts like he’s cosplaying as Adam Sandler in “Punch-Drunk Love.”

There’s no chemistry between Richard and Lena, and therefore no inner life to their relationship, so it’s somewhat hard to appreciate the dollar store wisdom she offers him. In an early scene, she points out that some of his expensive wine has gone bad. Richard doesn’t take this news well since he’s already convinced that wine offers “stock-like securities with bond-like returns.” Lena tries to reassure Richard: “You have to learn to let things go.” If you have to wonder why this advice doesn’t sit well (with him or with us), count the minutes before Richard takes his tie off after he and Lena return to his apartment. Or better yet, fast-forward to the movie’s ending, and see how things work out for poor Dick.

Richard’s not human enough to outdistance his pokey, declarative behavior. He’s too often pinned down by dialogue like “I don't understand what's going on with the market anymore and it's very disconcerting” and “We, too, are an ecosystem.” Because Richard is both limited and defined by his environment, you see. So Richard’s ugly because he can’t escape himself, and we’re stuck with him as mosquitos buzz around him, and eventually become his only companions. Richard never had to be pitiable or seductive to be an interesting monster, but his ecosystem will surely seem confining to anyone who isn’t already invested in the lifestyles of the rich and the damned. 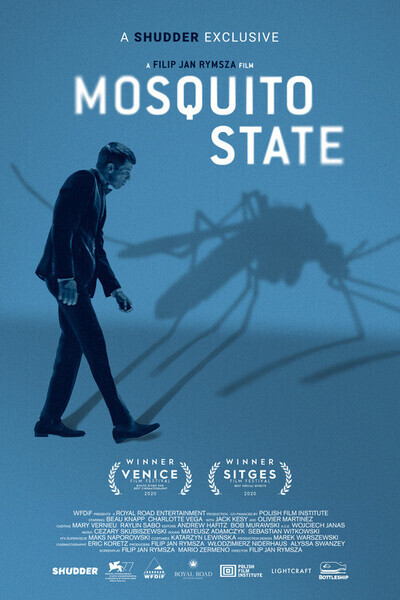 Audrey Wasilewski as Sally the Secretary