Monsieur Hire's life is organized with the extreme precision of a man who fears that any deviation from routine could destroy him. He lives alone in a neatly ordered room, where everything has its place.

He dresses carefully and conservatively and goes out every day to work by himself in a small office in the town, where he operates a mail-order business. He comes home to his dinner of a hard-boiled egg.

He listens to the same piece of music, over and over. He speaks to people only to observe the formalities: "Good morning." "Nice day." His sexual life is equally precise. Hour after hour, he stands in his darkened room, looking across the small courtyard of his building into the window of a young woman who lives directly opposite, and one floor below. She never pulls her shades. He watches her dress, undress, read, eat, listen to the radio, make love. Hour after hour.

Another young woman is found dead in the neighborhood - her body cast aside in an overgrown vacant lot. Who committed the crime? There are no suspects, but in this neighborhood a man like Monsieur Hire always is a suspect. He has no friends, no associations, no "life." The neighbors have marked him out as peculiar. To look at him, you would think it was absurd that he could kill anyone. But suspicion begins to grow.

The story of Monsieur Hire was first told in a novel by Georges Simenon, that endlessly observant Belgian who wrote more than 300 books, many of them works of genius. This is one of his best stories, a study of character and loneliness. Reading the book some years ago, I formed a picture of Hire in my mind, and seeing this movie I was startled to see how closely my notions matched the appearance of Michel Blanc, who plays the title role.

He is a solemn man with a fringe of black hair around a face that is more than merely pale; he seems to have been sprouted in a basement.

He is reclusive, solemn, absorbed with his own thoughts. As he watches the woman across the courtyard, we can only imagine what he is thinking. Somehow the conventional sexual fantasies do not seem to fit him; perhaps he is thinking what a slattern she is, or what an angel.

The woman (Sandrine Bonnaire) has a boyfriend. He is cold, distant and cruel, and he treats her badly. She does what he says. He does not make her happy, but certain women are attracted to cruel men.

Did the boyfriend commit the murder? The movie is not really concerned with the solution to the crime - much less concerned than the Simenon novel. Indeed, when the police inspector turns up in the movie, we're not sure at first who he is. Maybe he's a family friend?

"Monsieur Hire" is so delicate that you almost hold your breath during the last half-hour. Events of grave subtlety are taking place.

The heart of the movie involves two difficult questions: What exactly does the young woman think about Monsieur Hire, and what does he think that she thinks? Of course, the woman knows that Hire is always at his window, watching. She sees him one day, illuminated by lightning. Still she does nothing to conceal herself, and so from that moment on there is a kind of communication between them. Each knows the other is aware.

Monsieur Hire, so middle-aged and nondescript, certainly is not her "type." But is his adoration appealing to her? Is he the one man in the world who regards her simply as she is, and finds her wonderful? Does he want nothing more from her than to worship? Does this make her grateful to him, in a sense, considering the mistreatment she gets from the boyfriend? Will she lie to save Hire? Will she lie to save the boyfriend? The concluding passages of the movie have the weight of sad, inevitable tragedy to them. But nothing prepares us for the movie's extraordinary final shot, in which a swift action contains a momentary pause, a look, that seems torn out of the very fabric of life itself.

What does the look say? What is this woman trying to communicate? The director, Patrice Leconte, knows that to explain the look is to destroy the movie. "Monsieur Hire" is a film about conversations that never are held, desires that never are expressed, fantasies that never are realized, and murder. 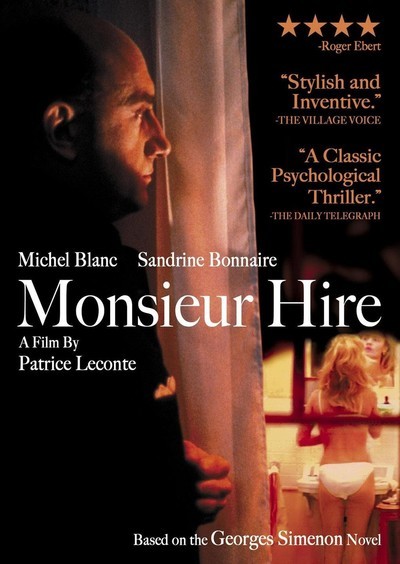