On a lonely mountaintop above the clouds, somewhere in Latin America, a group of teenage commandos—part of an amorphous army called "The Organization"—live in a feral state, awaiting orders from their superior, a frightening figure who shows up at random from the landscape far below, to put them through physical and emotional drills, drop off supplies, harangue them. The teenagers' squadron name is "Monos" (monkey), and all go by noms de guerre—Wolf, Lady, Boom Boom, Dog, Rambo. They are given charge of a milk cow and a prisoner (an American engineer referred to only as "Doctora"). Neither cow nor prisoner can be harmed. Why "Doctora" has been kidnapped isn't made clear, and it doesn't matter to the kids, anyway. Connected to the outside world only via radio (if it works), whatever war they're fighting in is very far away and very abstract. This is the set-up of "Monos," Alejandro Landes’ third feature, a fascinating and sometimes frustrating film. These kids—maybe orphans or street kids, maybe kidnapped or pressed into service—and then brutalized by military discipline and indoctrination—are left totally alone, no adults in sight, to create their own world. If you've read Lord of the Flies, you know a society created by kids left up to their own devices is rarely good or healthy or wise.

Landes, who also wrote the script, does not put "Monos" in a specific locale. This is not the story of a specific war, or a specific country (although Colombia feels like the most natural choice). By leaving out details like this, by having the characters speak in a shorthand with one another, with absolutely no expository text, the audience is thrust into the thick of the confusion on that mountain, the kids cavorting around bonfires, shooting their weapons into the air, rolling around in the mud, teasing and tormenting their prisoner "Doctora" (Julianne Nicholson). This is the story of what happens to kids in war, what happens to the mind under a kind of brainwashing, especially a susceptible teenage mind. If "mercy" is seen as weak, if the group decides "mercy" is bad, it's very difficult to go against that grain, to maintain your sense of humanity. This is how "peer pressure" works in its most sinister state. If it's hard for adults to stay their own course, then imagine how hard it is for teenagers. One of the kids, named "Rambo" (Sofia Buenaventura), has somehow kept a spark alive, a spark of softness and care for others. Her sense of empathy makes you wonder if her nom de guerre was a mean-spirited tease imposed on her by the squadron.

Except for Rambo and the wild-eyed Bigfoot (Moises Arias), the guerrilla soldier kids don't emerge as individuals, which I imagine is the point. Individuality is crushed in this environment. "Doctora," forced to participate in their games, forced to make "proof of life" videos where she holds up a daily newspaper, huddles in her "room" in a huge abandoned bunker, and at first Nicholson gives off an air of such frayed-nerve trauma she's like an automaton. But as "Monos" progresses, "Doctora"—malnourished and in shock—takes on a firmer shape. She's trying to survive a completely mad situation. The kids are frighteningly unpredictable. None of them speak English and her Spanish is halting, at best. Their "playing" is always rough-housing. They eat mushrooms and go on a group psychedelic trip. Every moment is a hazing opportunity, only it's hazing done by children waving around gigantic automatic weapons. Eventually, the order comes that "Doctora" needs to be moved off the mountain and down into the jungle. It's hard to tell how the war is going. To the kids of "Monos," the war is wherever they stand.

None of this is all that profound, and has been examined in countless films with more depth and complexity than "Monos" achieves. But "Monos" is elevated into epic territory by the superb work of cinematographer Jasper Wolf, whose feel for the power of landscapes and light is inspired: mountaintops blanketed in thick fog, thunderstorms rolling by far below the outpost, the impenetrable green walls of the jungle, the vastness of nature so palpable it's a shock when an actual building eventually appears, late in the film. You had forgotten there was such a thing as a floor or walls. Composer Mica Levi's omnipresent electronic score creates an unnerving undercurrent, throbbing with menace and danger. The sense of being "right there" in the thick of it is often unbearable, with hand-held camerawork bringing us close in to the kids' faces, with a looming grandiose landscape blurred-out behind them. They're always on the edge of an abyss.

This is a stunningly photographed film, and although I realize it won't be possible for many, I suggest seeing this one on the big screen if you can. 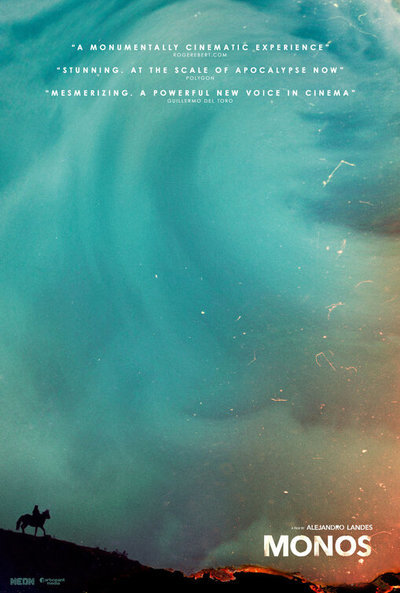