As accounts of brotherly rivalries go, "Mistaken for Strangers" isn't exactly Cain and Abel. For one thing, its ending is far less tragic. Which, in this case, is no small achievement considering the previous titles by this documentary's novice filmmaker—the horror thrillers "Dirt Under His Nails" and "Wages of Sin"—both end in murderous rampages.

Nor is this simply a backstage look at the phenomenally popular American indie-rock band known as The National. Although that premise appears to be what director Tom Berninger initially intended when he joined sibling Matt, The National's lead-singer front man, and his four bandmates—who happen to be two sets of brothers—on the road during a world tour to promote their 2010 album, High Violet.

Instead it's more of a gently amusing and ultimately poignant Can and Not Able tale, about a rising rock star and his younger slacker sibling as they try to lessen the gulf between them created by one's great success and the other's countless failings. In tone, it's somewhat similar to "American Movie", the 1999 cult doc about an ill-equipped filmmaker's misguided yet determined attempt to make a horror film at the expense of his own personal life.

While there are plenty of scenes of Matt and his musical bandmates in action while rehearsing and on stage, Tom's lack of focus and general air of ineptitude (the first question he asks his brother on camera: "On tour, it's day in and day out—does that ever make you sleepy onstage?") lends a meandering raggedness to his attempts at capturing the band's reality. That leads a frustrated and impatient Matt to inquire, "Do you have any kind of organization and plan for this film?"

The one actual plan in place is to have Tom pay his way by working as a roadie, a job whose few requirements—moving equipment, providing refreshments along with towels and water for the band during performances, keeping track of the VIP guest list at concerts (Werner Herzog pops up in Los Angeles)—seem to be beyond his capabilities. Instead, he tapes himself getting drunk on the tour bus, peppers the busy crew with inane queries and captures evidence that dishearteningly confirms his brother's idol status, including a live appearance alongside President Obama. Not helping matters is that Tom is a metalhead who considers his brother's introspective songs with their cryptic lyrics to be "pretentious bull----."

You don't have to be a fan of the band to be touched by these disparate souls. It does help if you have endured or been either version of these brothers—black sheep or golden child. Ultimately, it is the differences between Tom, who looks like a short-and-stout version of his tall, lanky brother, and Matt that are most fascinating to observe.

Matt, married with a young daughter and a home in Brooklyn, is a complete professional and looks it onstage in an all-black uniform of a suit coat, dress shirt, vest, tie and denim trousers. He is subdued although prone to anger, primarily whenever Tom fails to follow orders and acts irresponsibly. Tom, who doesn't even own a set of dishes and feels unready for a girlfriend even though he is in his early 30s, prefers shorts, T-shirts and purple flip-flops. He is lackadaisical, often thoughtless and insecure about his ability to do just about anything.

The crisis point comes when Tom is kicked off the tour when he forgets to get aboard the bus and causes a two-hour delay. Not that his brother abandons him. Instead, Tom moves in with Matt's family so he can begin to piece together his movie. After a disastrous early screening caused by a malfunctioning projector, he is eventually inspired by Matt's own admissions of doubt during The National's early lean years to change the focus of the documentary and make it primarily about their relationship.

Some have questioned the sincerity of this turn of events. Did Tom and even Matt know all along that this is what "Mistaken for Strangers" would be about? Some of Tom's goofier moments—doing silly poses in a mirror or consistently messing up on the job—just seem a bit too obvious sometimes. Besides, a segment with their painter mother, Nancy, in their childhood home in Cincinnati confirms that although Tom had a bad habit of never finishing anything he tried, he often exhibited more imagination than his brother in artistic pursuits.

Of course, Tom's bad luck this time seems like a blessing in disguise. Not only did it land him the opening-night spot at last year's Tribeca Film Festival. It also has allowed him to see a project through to completion for once. But not alone. Sitting through the end credits—which features rare footage of Tom actually working his butt off for the benefit of his brother and reveals that Matt's wife, Carin Besser, was an essential contributor as a producer and editor—it becomes readily apparent that "Mistaken for Strangers" was a group effort. And also an act of love. 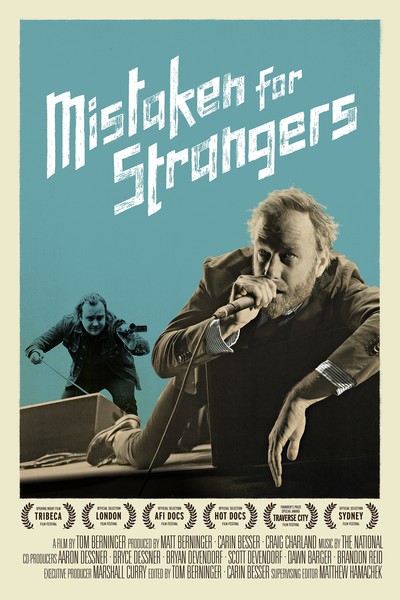