The first time we see Nicole Beharie’s character in “Miss Juneteenth,” a former beauty queen named Turquoise Jones, she’s reminiscing about her pageant glory of yore. She sits alone in her bedroom, unpacking the sparkly tiara and spectacular gown she wore when she won the title: a vibrant explosion of canary-yellow tulle that’s striking against her dark skin.

The next time we see her, she’s wearing that shade of yellow again—but it’s a bandanna that’s covering her head as she scrubs the toilet in the divey BBQ joint where she works. That’s the kind of specific character detail and vivid sense of place we see throughout writer/director Channing Godfrey Peoples’ feature filmmaking debut. Peoples places us right in the middle of working-class Fort Worth, Texas, establishing the strong feeling of African-American pride and tradition that gives the film its title within a contemporary, accessible setting. And she draws complex performances from the naturally radiant Beharie—for whom this would be a star-making role in an ordinary world—and newcomer Alexis Chikaeze as Turquoise’s headstrong teenage daughter, Kai.

The pageant is named for the June 19 holiday: the day in 1865 when Texas slaves learned they were free, two-plus years after the Emancipation Proclamation. The real-life competition, which takes place in cities throughout Texas, is open to girls ages 15-18 and offers a college scholarship. Turquoise was full of promise when she won back in 2004, but life got in the way, derailing her plans. Still, she remains a local celebrity, albeit with a hint of scandal—so much so that she yearns for her daughter, Kai, to fulfill her destiny by competing in the Miss Juneteenth pageant, winning and blazing her own trail to greatness. Never mind that Kai would rather use her time practicing to try out for the school dance team than learning about diction and etiquette. Turquoise grasps for what could have been by pushing Kai toward something she doesn’t want, and while that mother-daughter battle may sound familiar—as well as the drive for vicarious victory that gives the film its tension—Peoples’ understated tone and unhurried pacing make these situations ring true.

Far from being a shrill, pushy stage mom, Beharie’s portrayal of the feisty, hardworking Turquoise—or Turq, as her friends call her—comes from an anxious struggle to survive. She can barely afford to keep the lights on in her modest home, yet she saves up hundreds of dollars in tips to buy Kai a pageant dress she doesn’t even want: a garish monstrosity of aquamarine poufs. (Rachel Dainer-Best’s costume design is on point throughout.) But rather than criticize her for her misguided priorities, we feel sympathy for her. She’s a single mom doing what she thinks is best for her child, just as all parents do. Peoples clearly has affection for her characters, not in spite of their flaws but because of them. That instinct extends to Ronnie (Kendrick Sampson), Turq’s ex and Kai’s dad, a mechanic who isn’t around as much as he should be, and her mom (Lori Hayes), a judgy churchgoer by day and sloppy drinker by night. (Peoples actually might have explored that contradiction a bit more; her personality shift feels jarring and comes out of nowhere.) It also would have been nice to know more about Bacon (Akron Watson), the kindhearted funeral home director who’s smitten with Turq. He’s part of the black cowboy scene in Fort Worth, one of many cultural influences that give “Miss Juneteenth” a lived-in feel, and when he rides up on horseback to take her out on a date, it’s a lovely respite from the film’s realities of economic strife.

Cinematographer Daniel Patterson makes us feel the steam of humid Texas nights, but he also has an eye for the unexpected, romantic moments in Turq’s life: the moody pink-and-blue lighting during an after-hours slow dance, the glow of birthday candles in a darkened kitchen or the unvarnished warmth of mother and daughter sitting side-by-side outside the decaying restaurant. In scenes like these, the actors’ silence speaks volumes. Peoples trusts her performers enough to let their presence and their wordless interactions convey the power of their connection. Their ultimate destination may seem obvious, but walking alongside them on stage for a little while is a joy. 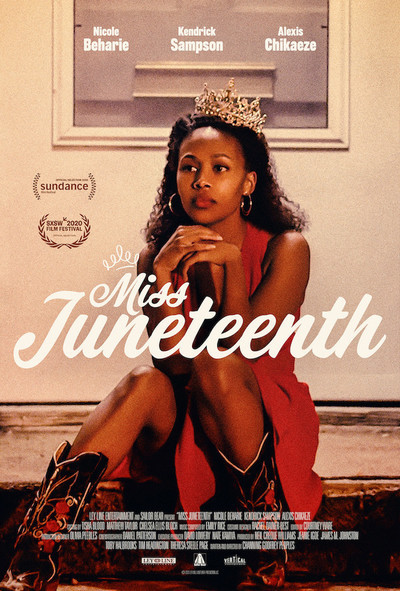