That was the slogan of the Women's Liberation activists who set out to disrupt the Miss World pageant of 1970. Their shenanigans made front-page news around the world. Bob Hope was the Master of Ceremonies, baffled at finding himself the center of a firestorm of feminist anger. While the protests got the most ink, the pageant was hounded by other geopolitical controversies, most significantly from anti-apartheid activists (allowing South Africa to compete was seen as condoning the racist regime). To complicate matters further, and breaking with pageant tradition while reinforcing the racial divide, two women were chosen from South Africa, one white, and one black (the second competed under the name "Africa South"). Even more extraordinary, the winner, Jennifer Hosten, was from Grenada (the first black woman to win the pageant), and the first runner-up was the aforementioned "Africa South," Pearl Jasen. Considering these explosive international implications, a group of women throwing flour bombs onto the stage and freaking out Bob Hope may have seemed like the least controversial aspect of the pageant. "Misbehaviour," a new film directed by Philippa Lowthorpe, is an attempt to tell this complicated intersectional story, and it does so with a comedic light-hearted style, sometimes appropriate, but sometimes inadequate to the possibilities inherent in the real-life event.

The film opens with Sally (Keira Knightley), struggling against sexist attitudes at her university (her dissertation about women workers is called "niche"). She's got a kid at home, and is active in the women's group on campus. Sally knows the system stinks, but wants a place at the table. Enter the radical feminist Jo (Jessie Buckley), who rejects the system altogether. She lives in a commune with women who look down their noses at bourgeois feminists like Sally, but Sally, drawn to their bold protest style, joins the group, just as the Miss World protest starts to take shape.

Meanwhile, the pageant contestants arrive in London from around the world, a-flutter with excitement. Gugu Mbatha-Raw plays Jennifer Hosten, thrilled to be there, but a little naive about the undercurrents of her participation (when "Africa South" says to her, point-blank, "Neither of us are going to win," Jennifer is crushed). Loreece Harrison plays Pearl Jansen, "Miss Africa South," afraid to return home to her country, whether or not she wins. Eric Morley (Rhys Ifans) is the goofy pageant producer, casually sexist but more harried than anything else, screaming at the gaggle of women: "WHERE is Japan? Someone find Japan! Yugoslavia, what are you doing at the front of the line?" etc. Eric's wife Julia (Keeley Hawes) runs interference with the controversies swelling up around the pageant. On the other side of the Atlantic, Bob Hope (Greg Kinnear, with a pointy-nose prosthetic) accepts the gig, against the wishes of his long-suffering wife (Lesley Manville, both steely and soft).

Screenwriters Rebecca Frayn and Gaby Chiappe split the story up into parts, each one running on its own track, until they all finally intersect. This is both a strength and a weakness in "Misbehaviour": the separate storylines help the film avoid the mistakes made in similar movies, particularly those dealing with feminist history. A lesser film would have centralized the experience of one woman finding her own personal victory through political activism. We've seen that movie so many times. "Misbehaviour" is refreshingly ambitious in its attempt to tell the different sides, and to de-centralize what normally would be front and center. Scenes counter each other, attitudes shift scene to scene, depending on the context. It's treated as a given that pageants are sexist and gross, but the scenes of pageant rehearsals plus the camaraderie of the contestants tells a different story. The separate storyline structure runs into trouble because these ideas don't have a chance to develop or take root.

The feminists, who decry the very idea of pageants, come up against the practical attitudes of the actual contestants, many of whom are from impoverished backgrounds, who view the pageant as a great opportunity. It's annoying when outsiders protest on your behalf, without even asking you how you feel about it. What if the contestants don't feel victimized? What if they love participating in pageants? Does that mean they're not feminists, or at the very least women not worth listening to? This is handled (somewhat) in a great scene late in the film between Knightley and Mbatha-Raw, when Jennifer calls the entire protest—and Sally's entire women's group—into question. It's the first time Jennifer speaks at any length, one of the disappointing aspects of the script. Mbatha-Raw creates a full three-dimensional character with barely any dialogue. One of her moments, a long closeup in a nightclub, is particularly memorable: she goes from a smiling public face to a mournful private face, her mask falling, the pressure getting to her.

In telling this story, the film believably evokes the period in its cars, clothes (Charlotte Walter's costumes are superb), and music. It even has specific details like the hanging of a spatula near the television to improve reception.

The 1970 Miss World pageant made headlines, but it didn't put women's liberation "on the map," as the film claims. There's no need to pump up the event in order to justify telling the story. The Bob Hope sections have little to do with the rest, except that he represents the "old guard," who wondered why these "nasty women" (so to speak) want to ruin the "innocent" fun of pageants. This dichotomy could have been interrogated more, and with far more fury. Calling into question a beauty pageant's right to exist is not on the level of fighting for the right to vote, and in some cases it may turn otherwise sympathetic women against your cause. But the question remains: how much are feminists blamed for "ruining" what has been deemed for centuries as "innocent fun"? How much are feminists still blamed for this?

In a moment early on, the perpetually cranky Miss Sweden complains to Jennifer about how they're being herded around the stage like cattle. Jennifer says, "You are a very lucky person if you think this is being treated badly." The sharpness in her voice was so intriguing I wanted to hear more. But, alas, "Misbehaviour" had already moved on to the next thing, leaving her comment unexplored. 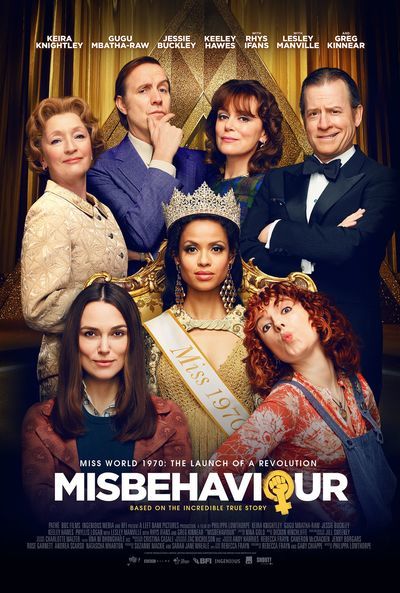