Kristin Scott Thomas and Sharon Horgan do their best to elevate “Military Wives” from a simple tune to a symphony, but the notes just aren’t there on the page.

The two stars have a pleasingly prickly chemistry with each other in this familiar, feel-good dramedy from “The Full Monty” director Peter Cattaneo. Like that 1997 smash hit and many other British films of this genre since then, “Military Wives” follows a safe formula of dry wit and whimsy on the way to underdog triumph. It features a motley assortment of lovable misfits who will come together, tap into their previously unexplored talents, suffer a few setbacks but ultimately emerge victorious at The Big Performance. (This is not a spoiler. This is also the structure of nearly every sports movie, with The Big Game providing the emotional climax.)

In “Military Wives,” inspired by a true story, Scott Thomas and Horgan’s characters try to wrangle their ragtag crew into shape to perform as a choir at the iconic Royal Albert Hall in London. But they have extremely different approaches to this task—as well as overall philosophies as to the group’s purpose—causing them to clash from the very beginning. They’re drawn distinctly in the script from Rosanne Flynn and Rachel Tunnard, certainly much more so than everyone else, but neither of them evolves much over the course of the film. Their passive-aggressive parrying may be enjoyable in the moment, but there’s no great sense of underlying tension to carry the movie forward with much momentum. These are all basically nice people trying to do a nice thing to keep their minds off the unpleasant reality of where their husbands are: Afghanistan in the early ‘00s. (There is one lesbian couple, but they’re barely defined.)

Scott Thomas stars as Kate, the colonel’s wife, who holds a place of superiority on the army base tantamount to her husband’s rank. She’s in charge of arranging activities for the wives to keep them occupied and distracted while their spouses are deployed: book clubs, knitting circles, that sort of thing. Horgan’s Lisa gets roped into helping in this regard once her husband receives a promotion. Naturally, these women couldn’t be more different. Kate is all crisp button-downs and pearls, a stickler for decorum as a longtime military spouse, and when the idea of forming a choir arises, she quickly provides sheet music for solemn hymns. Lisa is all wisecracking asides and bottles of wine who suggests they sing songs the ladies actually know and like, such as “Only You” by Yaz and Cyndi Lauper’s “Time After Time,” which becomes their anthem. These two strong-willed women can barely hide their disdain for each other, and watching them jockey for control of the choir is a consistent source of amusement. Cattaneo’s direction is extremely straightforward, which can be a bit dull, but it also gives these actresses room to shine.

If only the film as a whole rose to their level of commitment. Scott Thomas delivers a subtle, multilayered performance as a woman who’s constantly stifling her emotions for the greater good. Not only has her husband signed up for this latest mission, but she’s also grieving the recent loss of the couple’s grown son in battle; her feelings of anxiety and sorrow are always there, simmering just below the surface of her stiff upper lip. Horgan, meanwhile, brings the earthy, accessible smarts that made her such a pleasure to watch on the TV series “Catastrophe.” Her abiding naturalism makes “Military Wives” much more compelling than it has a right to be.

The supporting players can be described in a few words: the shy Welsh woman with an angelic voice, the brash soccer fan with a heavy accent, the eager but frequently off-key lesbian, the skittish young wife who married her childhood sweetheart. Of course, they’re terrible at first, which is meant to be hilarious. But far too quickly, they’re good enough to be invited to sing at the prestigious Festival of Remembrance honoring fallen British armed forces. “Military Wives” speedily skims through all these developments, but at nearly two hours still feels like it doesn’t dig deep enough into who these characters are and what their lives are like. We see it in tantalizing glimpses, such as the image of women looking out their windows at night as the men they love walk out down the street under the lampposts, dressed in fatigues with duffel bags slung over their shoulders, headed to the dangerous unknown.

“Military Wives” could have used more of such graceful moments of insight and humanity. And despite the innovation it aims for in its emotional crescendo, the song remains the same. 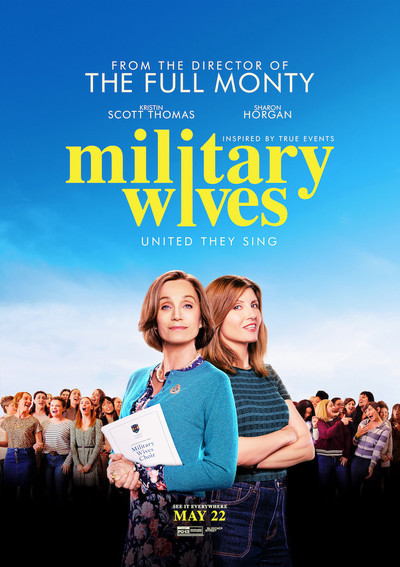 Rated PG-13 for some strong language and sexual references.