Sprung on a battered, beleaguered, campaign-fatigued nation just three weeks before a Presidential election that probably has a good chunk of the populace already reaching for their sick bags, “Michael Moore in Trumpland” won’t add much to the debased discourse of this miserable season. Though a skillfully managed bit of comedic agitprop that’s sure to please anyone who shares its political viewpoint, the hastily made standup concert film also doesn’t come close to equaling truly brilliant Moore political films such as “Sicko,” “Roger and Me” and last year’s “Where to Invade Next.”

Its title constitutes a bit of playful bait-and-switch, as well as indicating a missed opportunity. While “Michael Moore in Trumpland” probably suggests to many viewers 90 minutes of the filmmaker savaging His Orangeness, Moore actually spends fairly little time discussing Trump and is milder in his critique than might be expected. Most of the film is, instead, not so much a defense of Hillary Clinton as a plea for people to vote for her even if they don’t like her. As for the missed opportunity: What if Moore had taken his cameras into the heartland and filmed conversations between himself and a range of fervent Trump supporters? That might have been both funnier and more revealing than what we get here, which is a monologue rather than a dialogue.

No doubt, Moore genuinely wants to engage Trump supporters. Though he may have been writing “Michael Moore in Trumpland” for most of the year, he filmed it just a couple of weeks ago, in Wilmington, Ohio, where polls indicate overwhelming support for Trump. Announcing a Michael Moore concert for the community (which, ironically enough, is in Clinton County), the filmmaker’s promoters stressed that Trump supporters were welcome to the event.

One of the most appealing aspects of the film lies in watching the show’s audience. The medium-sized theater contains some who seem to be Moore fans (could it be that all of Clinton County’s liberals might fill only half the hall?) but others are clearly Trump folk. They’re the ones—virtually all middle-aged white men—who at first sit with stony stares, arms folded across their chests.

You look at these guys and wonder what they’re expecting. Given decades of Moore’s demonization by Fox News and talk radio, no doubt some are expecting a ranting, bilious bullhorn of liberal pleading and anti-American venom. That some of these folks’ expressions soften notably—if not entirely—during the show seems to reflect two facts about Moore that they weren’t anticipating. He’s an entertainer. And he’s a patriot.

The entertainment factor kicks in first. Moore comes out and stands behind a podium at center stage; he later moves to a desk at stage right and then a chair at stage left. On greeting the audience, he notes that a section of one balcony has been reserved for Mexicans and “people who look Mexican.” Around these folks a makeshift wall is erected and they’re told they’ll have to pay to leave at the show’s end. Across from them in a facing balcony is the seating for Muslims, who are watched over by a small drone. Moore assures them the drone isn’t weaponized, it’s just there to surveil.

These scene-setting remarks get the crowd laughing, and the laughter continues through most of the show. Once he begins addressing the audience, Moore talks about how he sympathizes with the reasons why many people are drawn to Trump, especially the economic ones. He hails from Flint, Michigan, which saw many of its good manufacturing jobs shipped overseas. And Moore opines impishly that the shifting gender balance in American society actually reached a breaking point earlier this year at the Super Bowl when a couple of male singing acts were abruptly upstaged and swept aside by a fearsome leather-clad Beyoncé and her brigade of Valkyries.

In discussing Trump, Moore almost seems to assume to people already know most of the arguments against him and don’t need to hear them repeated. His satiric attack mainly occurs in a staged news show that reports on the day of Trump’s inauguration, where he insists on traversing Pennsylvania Avenue in his helicopter and, after pronouncing the White House “a dump,” turns it and the government over to his kids and Mike Pence.

Perhaps the most memorable part of the Trump segment, though, comes in a real news clip shot in the 1990s that shows Trump answering a reporter’s questions as he leaves a building. He says something nice about Hillary Clinton and then about Michael Moore. But what’s most striking is not what he says but how he looks: so much more casual, relaxed, friendly and even charming than the scowling Mussolini sock puppet of late.

Turning to Hillary, he starts off by saying he’s never voted for her. Voted for Obama in the 2008 and Bernie in this year’s primaries. Never voted for Bill either. So yeah, he knows all the reasons one wouldn’t vote for Hillary. Like that she killed Vince Foster. But take a moment and look at that, he says. The former White House counsel was found in his car on a Sunday morning in a Washington, DC park with a bullet through his head and a suicide note by his side. Imagine, Moore says: Hillary would have had to get up really early on a Sunday, shoot Foster and write the note, and then high-tail it back to the White House in time for church!

But really, he adds, wouldn’t the U.S. benefit from having that kind of super-stealthy “bad-ass” as commander in chief?

Though he uses other absurdist sallies to illustrate why people despise and suspect Hillary, the most interesting and affecting part of his argument comes when he turns serious and reflects on the difficulties and animosity she faced at a time when her kind of ‘60s/’70s feminism drew overt hostility from the male establishment. He speculates that for decades now she has been “biding her time” and “playing the long game” and that when she becomes president, we might see a transformation in her akin that which saw a prelate with a history during Argentina’s murderous dictatorship emerge as Pope Francis.

Well, one can always hope. In a press conference following a screening of the film in New York, Moore said he was not trying to convert Trump supporters but to reach Trump-leaning undecideds, Bernie supporters, people planning not to vote, and those intending to vote for third-party candidates. Whether he’ll persuade any of those folks remains to be seen, but his time to do so is very short indeed. 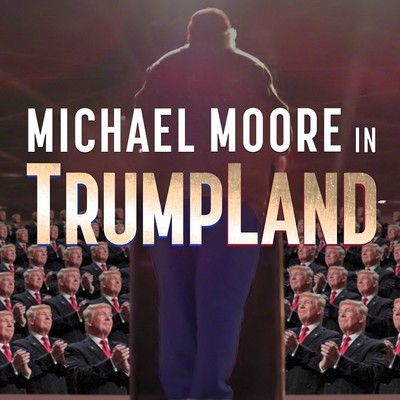