“MI-5” looks exactly like what it is: a movie derived from a TV show. The show was called “Spooks” when it ran on the BBC for ten seasons, from 2002-2011. In the U.S. it was known as “MI-5.” This reviewer never saw the show, but on the evidence of the movie, he feels he didn’t miss much. Its relative longevity, though, indicates the series must have had a dedicated following, which is no doubt the prime audience for this theatrical elaboration. Others viewers may be less appreciative.

An action espionage tale vaguely in the Jason Bourne mold, "MI-5" does indeed play like a TV spin-off, but one in which the filmmakers said to their team, “Listen up, all! We’re now doing the cinema version. What can we do to make it cinematic?”

The answers supplied by Bharat Nalluri, one of the TV show’s original directors, and his collaborators are pretty much what you’d expect: super-widescreen format, lots of panoramic wide shots (especially from helicopters), big action scenes, and a story capacious enough to encompass roles for a number of reputable character actors plus a lead part for one hot young TV-into-film star, “Games of Thrones”’ Kit Harington (who has been bruited as a potential replacement for Daniel Craig as 007).

The film kicks off with a rather stereotypical action set-piece that cuts between two main locations: stuck in traffic during a rain storm, a high-security van carrying an important American jihadi is attacked by gun-wielding motorcyclists, who free the prisoner and create mayhem before speeding off; back in the MI-5 subcommand center, agents and their superiors watch this attack via a bevy of security cameras but find themselves unable to thwart it. The man in charge, Sir Harry Pearce (Peter Firth, a veteran of the TV show), gives the order to release the prisoner in order to prevent a bloodbath among ambient civilians.

There’s something, well, almost comically British about this opener. Can you imagine an American film in which a high-value prisoner’s captivity would be at risk due to a simple traffic jam? And would the cream of the nation’s intelligence service be shown as so completely impotent and inept that they can’t even get agents to the scene during the crime?

Funny thing is, though this is not at all a satire (or at least not obviously so), that very comparison seems to be on the filmmakers’ minds. The rescued jihadi is a CIA prisoner; the Brits are simply transporting him to their Yankee counterparts. We hear the CIA and the U.S. mentioned repeatedly during the scene, often in terms suggesting that the guys across the Atlantic are superiors rather than co-equals. (“The Americans will crucify us,” frets one MI-5 officer.) It’s interesting to wonder why this is so. Is it to appeal to American viewers? Or to intimate that Britain’s intelligence services really are second-rate? Or could it be a correlative for the filmmakers’ sense that Hollywood is better at this kind of moviemaking than they are?

Whatever the reason, the remainder of the movie centers on two characters. After he flubs the jihadi’s escape, Harry Pearce becomes the spy who goes out into the cold, disappearing underground in an attempt to find out who in MI-5 betrayed his operation. And to try to locate him, the outfit recalls an agent from Moscow: Will Holloway (Harington) is a young hot-head whose relationship with Harry has the distrust and flux of a troubled father-son bond.

Naturally, the specter of Islamic terrorism looms over much of the tale, and it produces a spectacular explosion at a West End theater where the NATO is having a gala, although here too there’s a note of British underachievement: the blast seems to obliterate much of the full building, yet later we hear that only six people were killed.

Besides the obligatory explosions, shootings and much talk about technology & terrorism, the film features lots of scenes of characters running down London streets, through busy public spaces like airport terminals and such. Somehow this feels more formulaic and repetitious than exciting, so it’s worth wondering how much Nalluri’s stylistic choices had to do with that. In the "Bourne" films, where such scenes usually are exciting, the directors (especially Paul Greengrass) often favor telephoto lenses, which lets us see the characters’ expressions. Here, Nalluri generally employs wide-angle lenses, which makes the running seem faster but seldom allows views of the runners’ faces. That choice, of motion over emotion, can stand as a symbol of the differences between TV-style and more cinematic approaches to such material.

In a cast that also includes Jennnifer Ehle, David Harewood and Lara Pulver, Peter Firth easily proves the standout. He’s the kind of British actor whose gravity and rumpled worry bring a welcome touch of John le Carré to a film that, like most of its ilk these days, is more interested in action than motivation. As for his junior counterpart, Kit Harington does a credible movie-star turn as the long-haired rebel, but he strikes this reviewer as too youthful and unseasoned to be catapulted into the shoes of James Bond. 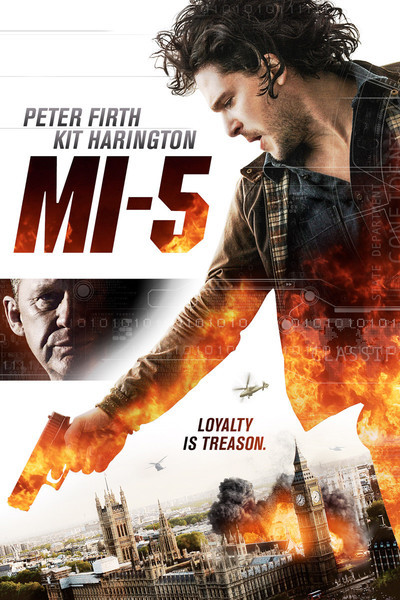 Rated PG-13 for violence and some language.

Kit Harington as Will Holloway