The French/Japanese animated sci-fi adventure "MFKZ" feels like a grab bag of stuff that the film's creators—including co-director Guillaume Renard, who adapted his own "Mutafukaz" comic—thought might go together. It's a generic fantasy set in Dark Meat City, a riff on modern-day Los Angeles that's inhabited by busty women with little to no agency (or even dialogue), masked Mexican luchador wrestlers, and gun-toting black gangsters led by an obese, Shakespeare-spouting thug (voiced by Wu-Tang Clan rapper RZA). I was born and raised in New York City, and even I'm rolling my eyes.

The plot is barely coherent—anxious loser Angelino (Kenn Michael) and his BFF Vinz (Vince Staples) run afoul of some shady Men in Black after Angelino gets hit by a truck and starts to see demon-shaped lurking behind some G-men-looking citizens—but I'm not really sure that's a huge problem. "MFKZ" is all about speed and style since it's essentially one long chase scene married to half-a-cocktail-napkin's-worth of plot (The world is ending, Angelino's stronger and weirder than he thinks, and now he must save California, yadda yadda). The animation, whose backgrounds/"environments" were directed by Shinji Kimura and whose animation direction was generally supervised by unsung Japanese journeyman Teiichi Takiguchi, looks fantastic. But beyond that, "MFKZ" is the kind of barely-there fantasy that disappears from your memory even while you're watching it.

The filmmakers' strategy for pop culture appropriation/homage is pretty simple: openly acknowledge what you're ripping off, as if slightly tipping your cap to your titanic predecessors somehow changes the fact that you're still obviously standing on their shoulders. "MFKZ" features overt nods to everything including "They Live," "Grand Theft Auto," and even the Marvel Comics character Venom. Which would be fine if the filmmakers actually synthesized these influences into a meaningful or just joyfully crass story of their own. Renard and co-helmer (yes, there are more directors) Shojiro Nishimi don't come close to that.

It's impossible to care about anything that happens in "MFKZ" since Angelino—a slightly racist-looking black character with a black bobble-head-style head and bulging white eyes—is barely even a character. He and Vinz, who has a flaming skull for a head, are chased around by a bunch of bad guys who secretly run the government, and the economy, and the world, too. The bad guys are led by a stereotypically gruff but indestructible white gangster named Crocodile (Michael Chiklis), who works for Mr. K (Giancarlo Esposito), a mysterious crime boss who lives in a technologically advanced cave. Angelino also has a paranoid (but aptly so) talking cat friend named Willy (Dino Andrade) and a big crush on Luna (Dascha Polanco), a femme fatale-like young woman with large breasts, larger eyes, and pigtails with skull-shaped clips. As Angelino bounces from one encounter to the next—never really seeming to run into problems that won't resolve themselves in a few scenes—it becomes clear that his only defining trait is that he doesn't have a personality: "I just want to be ... a somebody." It's pretty telling that such a milquetoast character appears to have the most dialogue in "MFKZ." Everybody else is a supporting character in Angelino's boring hero's journey.

And what a journey it is: the only distinct features of Dark Meat City are its billboards and shop signs. Garish ads written in in faded primary colors—a couple of which command viewers to "Consume," just like the ones in "They Live"-are fun to gawp at, especially when your mind wanders from Angelino's insubstantial story. Periodically, the filmmakers throw in some "Grand Theft Auto"-style inter-titles—in one scene, a post-card style font appears in mid-air, welcoming viewers to "Palm City, City of Bangers"—possibly to keep sleepy viewers awake, but more likely just to show how hip and post-modern they are, with the fourth-wall-breaking and the juvenile humor. Sometimes (ok, maybe two or three times), those inter-titles come in the form of rhetorical questions that feel like pop quizzes for inattentive viewers, like one that screams "What the fuck is going on?" shortly before "And how does Vinz stay alive with his head on fire?" Cute, but mostly annoying. 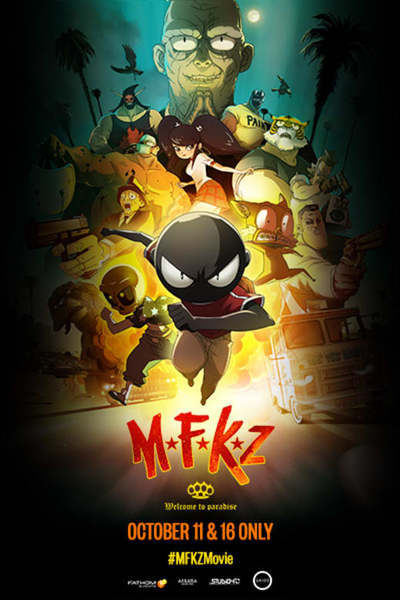 Rated R for bloody violence, language and some sexual content.