The latest horror movie to hit Netflix arrives with the unusual timing of 12:01 AM PT on a Sunday morning. But given the monster of “Mercy Black”—a sinister, hypnotic, fictitious supernatural force like Slenderman, Candle Cove, or the Blair Witch before them—it makes sense: Netflix is quietly dropping “Mercy Black” into its library like an anonymous Reddit post that tells a gruesome story, where what matters most is that it spreads, that scared people believe it. But if having their own Momo is Netflix’s latest attempt to grab viewers, they’re gonna need a much more disturbing monster.

In the case of a woman named Marina (Daniella Pineda), Mercy Black was the reason that she and her friend Rebecca did a horrific thing to a third friend 15 years ago. In the opening sequence, we see her and Rebecca walk a third girl through an open field (singing “Itsy Bitsy Spider,” so you know it’s ominous) to a ravine, where the third girl is hit in the head with a rock. It's also soon revealed that they stabbed her multiple times. The story goes that Rebecca and Marina were trying to offer a sacrifice to Mercy Black, a force who had promised to take away their sadness in return. But was Mercy Black real? If not, who made her up?

Years after the event, as a mortified Marina leaves psychiatric care to stay with her sister Alice (Elle LaMont) and Alice’s young, impressionable son Bryce (Miles Emmons), Mercy Black has lived on. As Bryce notices when searching Mercy Black on the internet, she’s gone viral, with origin tales on various websites that may or may not have been told before Marina's incident. And as Will (Austin Amelio), Alice’s skeezy true crime-junkie boyfriend poignantly states when getting hyped up about Mercy Black with dollar signs in his eyes, “She’s real enough.”

Marina meanwhile is haunted by recollections of the crime (as if she didn't work on them just a tiny bit at a facility overseen by Janeane Garofalo's exposition-spewing Dr. Ward). And not long after Marina's arrival, strange bumps in the night start to occur at Alice's house, terrifying Bryce especially. Marina tries to help him by sharing her trick for sanity—saying to yourself that it's not real, and counting to five—but 'sounds like Mercy's back, and Marina better retrace her steps from 15 years ago. It's in these passages that Pineda does solid emotional work, showing a woman working through a personal horror. But the limited script by writer/director Owen Egerton does not take these intriguing ideas of belief and trauma to a challenging place so much as a routine, slightly twisty third act.

For a story built on the palpability of belief—that believing in something is more powerful than fact—"Mercy Black" toes a line of practicality with its terror. What kind of monster are we dealing with here: a supernatural reckoning? Or is this flesh-and-blood slasher justice, like the hook man unleashed on those negligent ‘90s teens in “I Know What You Did Last Summer”? Egerton teases both possibilities for a long time, and it only pays off when the movie goes completely bonkers at the very end. Credit where credit's due, it’s the type of resolution that might lose some viewers’ graces, just as much as it might win a few of them over.

Egerton is very particular in how we learn about Marina's incident, flashing back to it with abrupt cuts and visual triggers. But it doesn’t feel like Marina’s memories are coming together so much as a writer/director is withholding information for the sake of creating dread, slowly bringing us to his big picture. Though these are the only moments that the film is disorienting—progressively revealing how evil these young girls were—they also make it more tedious. While treading through the mystery of its past and experiencing the supernatural shenanigans of the present, you wait for “Mercy Black” to make you afraid of its secrets. That moment never arrives.

The drama is sporadically curious, but you’ve seen the spooky stuff within "Mercy Black" more than a few times before: a creaky old home that conveniently doesn’t have a lot of lighting at night, jump scares that are telegraphed by obvious edits and music cues, a haunted-looking young boy. Even the design of Mercy herself leaves you hoping for a little more menace.

When it comes to what scares us, believing is seeing. It’s what fuels our modern viral nightmares, like in the case of the kids who don’t know better and their subsequently frightened parents (Kim Kardashian included) who gave Momo a life beyond being a cropped photo of a sculpture with a gruesome backstory attached. But that barely tapped power of “Mercy Black,” whether in scenes of trauma or terror, makes it all the more disappointing. Mercy Black is just another monster you won’t care to believe in. 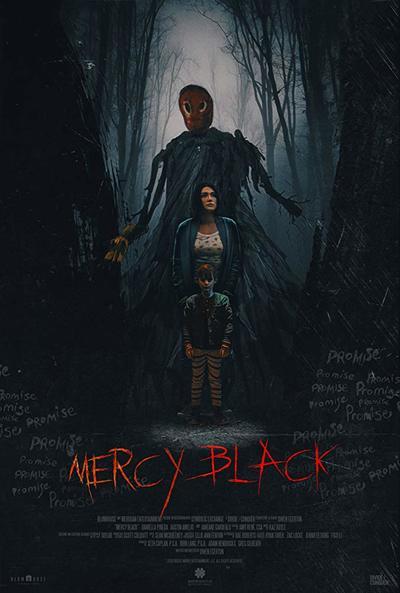 Austin Amelio as Will