There’s a point relatively early in “Memoria,” the stunning new drama from Apichatpong Weerasethakul, in which Tilda Swinton’s protagonist is trying to describe a sound that she’s been hearing in her head, leading to sleepless nights. She explains it to a technician and he presents her with an audio clip that tries to replicate it. I said out loud, “No, it’s earthier.” And then Tilda preceded to say almost exactly the same thing. I’m not trying to say I’m psychic, only that I was deeply on this film’s wavelength, and I think Weerasethakul, also known as “Joe,” would like that story.

Joe wants his films to connect in that manner, not through plot or even character, but through experience. He wants to question how we engage with motion pictures, and, by extension, life itself. His “Memoria” will reportedly never have a physical release, only playing in theaters in a traveling road show, going across the country for years, one week at a time, starting this Sunday, December 26th, in New York City. While I don’t love what this means in terms of too few people being able to access great art, there’s a certain logic to this specific film being given the roadshow treatment. It is about experience. It’s a journey for those who are willing to take it.

Swinton plays Jessica, a woman who is visiting an ill sister in Bogota. There is immediately a sense of international displacement in that Jessica is from Scotland but lives in Medellin and is now visiting Colombia (it's amplified by this being Joe's first film that's mostly in English). That displacement is enhanced by "the sound." It opens the film, followed by the image of Jessica rising out of bed. Did she hear it too or was that just for the audience? She did and she begins to hear it more and more. Viewers will want to play detective. Does it come with stressful situations? There’s a dinner scene in which that seems to be the case. And yet anyone who has seen a Joe film will know answers are unlikely to be given.

Jessica’s journey gets more unsettling. She meets with the aforementioned technician to figure out the origin of the sound more than once, but he appears to not exist when she returns to see him again. Similarly, at the dinner, she’s told someone she was certain had died is still alive. It’s as if her entire existence has been slightly displaced. She wanders the streets of Bogota until she’s finally away from the noise of the city. Maybe here she can to get the bottom of what’s happening? Probably not.

Rarely have a filmmaker and performer been so completely on the same page as Swinton and Joe are here. She is mesmerizing in how she plays unsettled more than panicked. Some actresses would have leaned into the relative insanity of Jessica’s predicament, but Swinton carries it in a concerned look or a tightened posture. In the final act, as the film becomes more symbolic and less linear, she holds it together for the viewer, keeping us connected to the immediacy of what’s happening to her. “Memoria” is a sensory experience, but it takes a performer like Swinton to amplify Joe’s technique. We’re not just hearing the babbling brook and chirping birds on a soundtrack—we’re hearing them through Jessica’s ears. There will be thousands of words written on what “Memoria” is about but none of the readings of it would have any value without Swinton to center them.

So what is “Memoria” about? That feels like it could be different for everyone. In a sense, it’s a film that feels like it avoids strict interpretation. However, as strange as this sounds, it’s also a film about displacement to which I felt a deep connection. How is that possible? How is a film about a woman who seems to be almost drifting out of the world something that can be so mesmerizing? It’s mostly through Joe’s incredible craftsmanship. He somehow feels both very carefully considered and yet organic at the same time. He doesn’t believe in a lot of coverage or editing, often centering a camera on a scene and watching it unfold, as if we are sitting ourselves on one side of a room, taking it in with Jessica and whomever she’s encountered.

I see hundreds of movies a year but rarely does one completely disconnect me from the many distractions going on in my life. “Memoria” did that for me more than any other in 2021. It is a film that may be harder than most for people to see over the next few weeks (or even months or years) but one that I suspect will truly resonate with those who feel similarly displaced from the world around them. We may not have all heard the same exact sound as Jessica, but we know that feeling. It’s earthier. 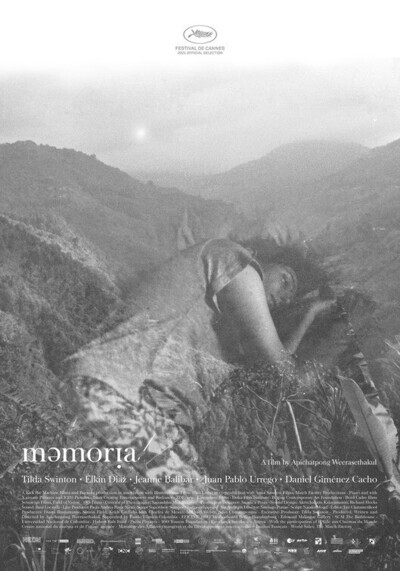