Based on the Shakespeare play of the same name, Paul Ireland’s “Measure for Measure” is filled with drama, although perhaps not the kind you’d expect from the Bard. No, this is a modern-day adaptation—one grappling with xenophobia, drug addiction, and gun violence. There are no period costumes here, but there’s a stone-faced Hugo Weaving to make up for it.

Set at a housing commission tower, “Measure for Measure” follows numerous characters in the aftermath of a traumatic event, much like Paul Haggis’ “Crash.” And like that 2005 film, there are timely conversation starters folded within the narrative. Without warning on an otherwise unremarkable day, a drug-fueled addict ranting about how his neighbors should “speak English” turns violent and kills anyone who he sees as outsiders and those who try to help them. From high above the chaos, a crime boss known only as the Duke (Hugo Weaving) watches with a cool detachment, likely strategizing how he will regain control of his fiefdom while facing a kind of exile himself. He appoints his second-in-command, Angelo (Mark Leonard Winter), to oversee things in his absence. But in that moment of an unplanned murder on their watch, Angelo races downstairs and beats the gunman with a baseball bat before he can shoot another innocent bystander. Just in the nick of time, Claudio (Harrison Gilbertson) jumps into action and pushes Jaiwara (Megan Hajjar Smart) out of harm’s way, and the pair bond over their shared trauma. They quickly enter into a relationship that earns the anger of Jaiwara’s brother, Farouk (Fayssal Bazzi), a fellow shady businessman. Power struggles and a fight for true love soon follow.

Ireland and co-writer/co-producer Damian Hill update the Shakespearean text by adding a number of present-day social issues into the mix like Islamophobia, intolerance, organized crime, and police corruption. However, there’s a lot going on in the movie without ever really exploring those topics beyond a cursory mention. The surface-level lip service gives way to dueling arcs of a boilerplate crime drama and the tortured young love of two people kept apart because of religion, an issue given the most screen-time. Jaiwara’s family does not approve of her new relationship with a non-Muslim young man, so Farouk’s solution is to land poor Claudio in jail for a handful of serious offenses. It takes more than a few rounds of pleading for Jaiwara to help him out, including trapping Angelo in his own mess for taking advantage of the Duke’s power, a riff on one of the plot points in the original play.

Although the writing in “Measure for Measure” doesn’t quite stand on its own merits, some of the performances are noteworthy. Weaving, of course, hits the perfect almost-Shakespearean tone of a man burdened by both terrible loss and power. Winter plays the part of Angelo like a cocky Nick Cave cover artist, easily falling into temptation at every turn. Hajjar Smart gives a touching performance as a young university student caught between loyalty to her family and her newfound love. And Bazzi and Gilbertson make for unlikely rivals in the movie, but they do well as each other’s antagonists.

Unfortunately, Ireland and his cinematographer Ian Jones make a few technical missteps that visually detract from the performances. The movie has a washed-out appearance to make it look more gritty than it already is, and the film opens with some unsteady drone shots that demonstrate the limitations of its appeal when not operated by a skilled hand—it's hard to take Weaving’s steely glare atop a building seriously when it looks like the drone is still getting moved into position. There are also a couple of brutal kills towards the end of the film that lands more with a thud than with the emotional weight suited for Shakespeare’s sentimentality. “Measure for Measure” may not be as impressive as some other adaptations of the Bard’s work, and its attempt at addressing so many social problems doesn’t always succeed, but there are a few parts to savor in this thriller. 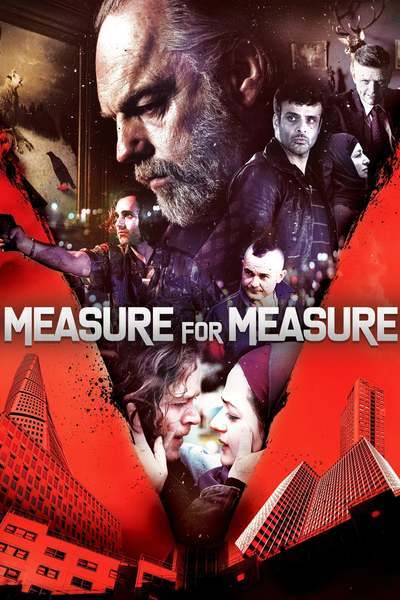