Marlina the Murderer in Four Acts

The first thing we see when “Marlina the Murderer in Four Acts” opens is a gorgeous rural landscape with the distant figure of a motorcyclist rapidly traversing it. Though the cyclist’s long hair flaps in the wind, it’s unclear at first if the rider is male or female—a sly way of raising questions about gender, whether intentional or not. But the main things that grab a viewer’s attention here are the beauty of the place and the confident eloquence of the staging, framing and editing.

The film’s involving, stylistic assurance continues throughout and ends up its primary asset. An Indonesian production that had Malaysian and French co-producers, “Marlina the Murderer in Four Acts” is the third feature by 37-year-old director Mouly Surya (her previous films were “Fiksi” and “What They Don’t Talk About When They Talk About Love”). It’s one of those features from a distant part of the globe that seems like it may have been created primarily for Western art houses and festivals, where its exemplary direction and feminist theme are indeed likely to win Surya new fans.

The first scene’s motorcycle, driven, it turns out, by an aging male long-hair named Markus (Egi Fedly), pulls up to the lonely house of the eponymous Marlina (Marsha Timothy). She’s a slender, pretty, dark-haired young widow whose position in life now is, quite literally, defenseless. Markus invades her home as if he already owns it and brusquely announces his intention to claim everything in it he wants and her as well.

His gang of six men will arrive shortly, he tells her, and they will take everything she has of value, mainly farm animals. And they will have quite a party committing their robbery, he promises. “If we have time, we’ll sleep with you.” Being gang-raped, he gleefully says, will “make you feel like the luckiest woman in the world.”

Markus’ gang arrives on schedule and sets about removing the things they want—10 pigs, 10 cows and seven chickens. After two men drive off with the bounty, Markus orders Marlina to feed him and the remaining four guys. She obeys, cooking and serving a chicken soup. As the four men all expire from consuming the poison it contains, Markus, unawares in the next room, rapes Marlina but pays for it with his life when she decapitates him.

The next day, she’s on the road hitchhiking and carrying Markus’ severed head for all to see. Having the film divided into four acts—“Robbery,” “The Journey,” “The Confession,” “The Birth”—may be an unnecessary contrivance, but its narrative (idea by Garin Nagroho, script by Surya and Rama Adi) has a pleasing, elemental simplicity, like a modern folktale told with Jarmusch-like minimalism enlivened by the occasional Tarantino-esque dollop of violence. Others have also noted the parallels to Sergio Leone movies in Surya’s widescreen compositions combined with Zeke Khaseli and Yudhi Arfani’s admittedly Ennio Morricone-influenced score.

These are all reputable influences of course, and it’s to Surya’s credit that she’s able to blend them so skillfully. Once Marlina hits the road in search of justice, the elegant compositions which had distinguished the previous scenes’ dusky interiors are transferred to the open air and the striking gold and green landscapes of Indonesia’s Sumba island.

In the people and incidents Marlina encounters on her trip, we get recurrent hints of the ways the gender wars play out in this poor, tradition-bound society. Early on, she meets up with a friend who’s also traveling. Novi (Dea Panendra) is extremely pregnant—nine months going on ten, she claims—and should have already delivered by now. With her distended belly and Marlina lugging Markus’ head, the two make quite a sight, the symbolic implications of which hardly need an exegesis. Novi, we learn, is on the road trying to find her husband, who think her late delivery is a sign of adultery—yet another indication of the suspicions that surround sex here.

The film’s latter sections deal with other aspects of this gender divide, and they lead to an ending that’s both exciting and entirely fitting. Along the way, Surya throws in welcome bits of unexpected comedy and even dashes of surrealism (Markus returns, headless but playing a musical instrument). Certainly, the story is essentially a revenge fantasy like many another, but its feminist slant never feels rhetorical or heavy-handed. The whole thing is handled with sly wit as well as unfailing stylistic smarts, which makes for a very satisfying package. 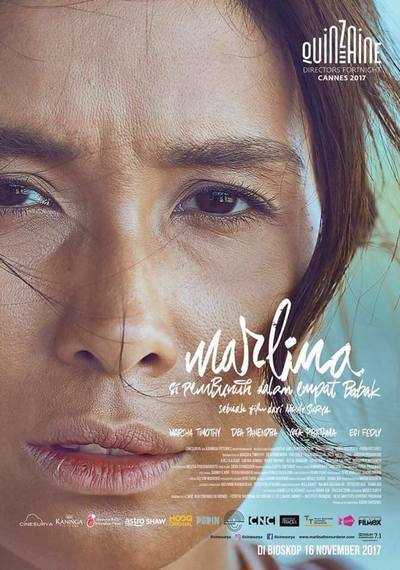 Marlina the Murderer in Four Acts (2018)