Have you ever heard the phrase “with a child’s heart”? The first time I ever heard it was through the lyrics of an old pop song:

It's a lesson post-Covid that we could all stand to live by. A new film for children, distributed by A24, reminds us all to see the world with the same kind of heart.

In 2010, out of boredom at a wedding, comedian/writer Jenny Slate created Marcel the Shell alongside her friend and director Dean Fleischer Camp. With an endearing, distinctive voice and Chaplin-esque shoes, the one-inch-tall shell took YouTube by storm, earning millions of fans of all ages around the globe, leading to two online shorts and a New York Times bestselling book.

The adorable little guy, voiced by Slate, now makes his way to the big screen in a live action, stop-motion feature film. Marcel carves out a colorful existence with his grandmother Connie (Isabella Rossellini), and their pet lint, Alan. Once part of an eccentric community of shells, they now live alone as the sole survivors of a mysterious tragedy. However, when a documentary filmmaker (played by Fleischer Camp) discovers them, the short film he posts online brings Marcel millions of passionate fans, as well as unprecedented dangers and a new hope of finding his long-lost family.

"Marcel the Shell with Shoes On" is about so much more than an internet sensation gone viral. It places a glaring spotlight on the pros and cons of sharing your life online, while representing caregivers who have lost loved ones unexpectedly and find themselves wondering how life will continue to flourish without them. Slate and Camp get even deeper when addressing the manner and lengths a child will go to protect themselves when not feeling safe in their own home.

The crystal-clear precision of the stop-motion animation in "Marcel the Shell with Shoes On" seamlessly melds with the live-action material and is fascinating to behold. But my favorite part was watching “60 Minutes" host Lesley Stahl infiltrate the pivotal interview reuniting Marcel with his community and the glee surrounding Connie and Marcel in the process. It really does speak to the child’s heart of even the most cynical of adults.

Marcel’s physical aesthetic of having one eye, a shell for a body and a never-ending perseverance is simultaneously contagious and admirable. Yet, the poetic justice and license of including Philip Larkin’s poem The Trees drives the dramatic thrust of this story, summing it up in one fell swoop:

The signs of newness are also sewn into what has died away. Everything changes all the time. I love being alive, especially in the late spring, when the flowers return again. But you can’t enjoy the daffodil without honoring what has died so it can regrow. If you want to really grow, you must be able to know and allow for what change really looks like and feels like.

"Marcel the Shell with Shoes On" will make your spirit soar and remind you to enjoy those you love, inhale a bit of fresh air, and respect the earth every second as though it were your very first time. It's a reminder to embrace all the stages of grief and see our dark chapters as changes that somehow make us better on the other side.

Available in select theaters on June 24th, with a nationwide expansion to follow. 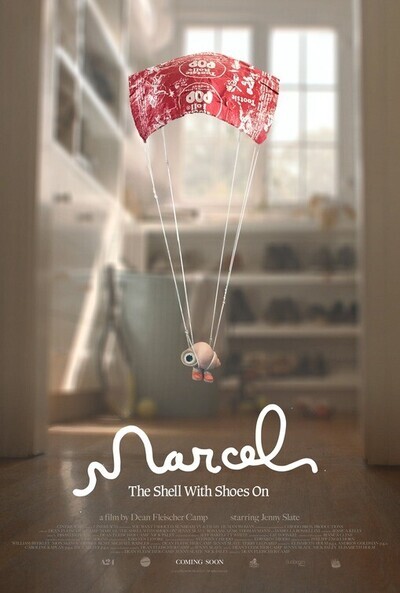 Rated PG for some suggestive material and thematic elements.

Lesley Stahl as Herself

Peter Bonerz as The Maestro (voice)