I’m giving this movie half a star more than I really want to because I’m aware that there are many contemporary moviegoers who are wired differently than I am. “Man From Reno”—reviewers are going to almost reflexively want to call it “The Man From Reno,” but once they’ve actually got the movie in mind they’ll be reminded there’s a good reason that’s not the title—is an intricately, even densely, plotted mystery/thriller that casts an unusual spell from its opening scene. Pepe Serna plays Paul Del Moral, a sheriff in a small town south of San Francisco. Out on a casual patrol one fog-shrouded evening, he finds an abandoned car, reports on it, drives on, and is stunned when a man bounces off his windshield. He brings the fellow to a hospital. The victim, a Japanese fellow in his 30s, is out cold.

The movie cuts to a press conference in Japan. Young author Aki Akahori (Ayako Fujitani) is being feted on the occasion of her latest novel, which she tells her publicist will be the last featuring her popular creation, the seemingly Columbo-esque avuncular detective “Inspector Takabe.” Freaked out by too much attention, and possibly something else, Aki hightails it to…San Francisco. Without telling anyone. An impromptu meeting with some old friends gives her a chance to show off some chops-in-deduction, traits the viewer is meant to believe she imbues her fictional creation with. But Aki’s not as cocky as all that. Toying with a straight razor in her hotel room bathtub, she’s clearly in distress. Maybe the charming stranger who approaches her in the hotel bar, also Japanese, can provide some distraction if not salvation.

For a while the two narratives, that of Sheriff Del Moral and Aki, run on alternating parallel tracks. Co-writer/director Dave Boyle actually keeps the viewer guessing with respect to timelines; as various (unseen) Asian men keep turning up in different states of distressed being, and Aki meets various other harried Japanese males, one is apt to wonder if the movie’s playing some sort of staggered-time game. As it happens, it’s not. Once Del Moral and Aki find each other the plot both deepens and thickens. Serna, with a good-humored gravitas that brings to mind Jason Robards, Jr., and Fujitani, whose combination of vulnerability and sharpness is spectacularly appealing, make a really intriguing team of investigators.

And that’s part of the problem with the film, at least for me.

And here I must pause, and ponder the ethics of the spoiler alert. This should serve as a signal for any reader with a powerful interest in watching the movie to stop reading now.

Still reading? Okay. Well, I’m not going to give anything away, at least not directly. Instead, I shall comment on the general topic of Genre Convention and what I consider acceptable ways of Breaking Genre Convention. Any of you folks out there remember a 2008 Korean movie called “The Chaser?” Really brutal, engrossing, race-against-time thriller that broke genre convention in a lot of ways, not least of which was making its titular protagonist the most unappealing character you could ever not-want-to-but-nonetheless-be-compelled-to-root-for in a movie ever. Which was kind of exhilarating. But then…Well, sometimes a movie oversteps its boundaries in an attempt to be “different,” and sometimes that overstepping is a grave miscalculation.

The last section of “Man From Reno” takes the movie into territory explored by the original “The Vanishing” and, of course, David Fincher’s “Zodiac.” Legitimate avenues, arguably, but I have to admit, as a viewer who was engrossed and invested in the characters, said exploration ended up really pissing me off. But what if I’m wrong to be pissed off? Hence, my three-star rating of the movie as opposed to the two-and-a-half I’d LIKE to give it. I’d really love (OK, maybe “love” isn’t the right word) to discuss this issue with viewers once they’ve had a chance to see “Man From Reno.” Genre fans ought to check it out post haste. I’m one myself, and my admiration for the superb conception and execution of the film goes hand in hand with disappointment and irritation. My question for myself is, do I have a critical leg to stand on, or am I taking the movie too personally? I have to give it credit for even making the question come up in the first place. 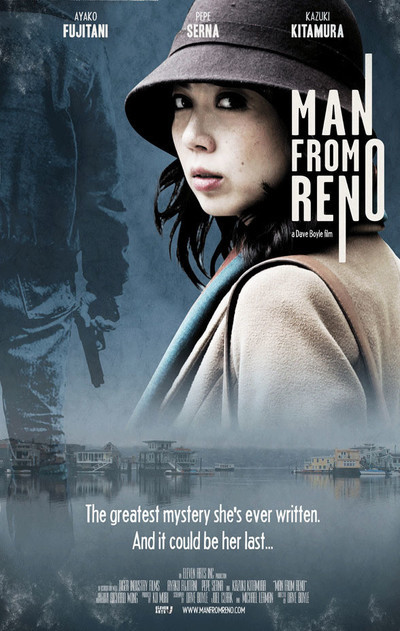