PTSD is a real, national crisis. It is something that is not openly discussed enough nor adequately handled by our government and those in charge of taking care of our veterans. The number of homeless vets and those suffering from PTSD in silence should be a priority for a country that wants to call itself civilized. None of these facts make Dito Montiel’s “Man Down” a good film. Actually, the fact that it uses PTSD as a hook, as something to give its drama a sense of weight and importance that it doesn’t otherwise earn, is one of its many problems. If you’re going to make a film about PTSD, treat it with the respect it demands, not as a clichéd, melodramatic device. By doing so, one actually damages the cause they claim to be attempting to defend, turning something serious into something manipulative. “Man Down” is a bad film, but it’s made even worse by the taste it will leave in your mouth regarding its silly handling of a very serious issue.

Montiel's latest takes place in what appears to be four separate periods in the life of Marine Gabriel Drummer (Shia LaBeouf). We see him with his buddy Devin (Jai Courtney) in a post-apocalyptic future, as the pair tries to track down Gabriel’s son Johnathan (Charlie Shotwell), crossing paths with a drifter named Charles (Clifton Collins Jr.), who may know where the boy has been taken. The landscape they cross is desolate and empty. Where are they? What happened to Johnathan? What happened to everyone else? It's purposefully vague and confusing.

We flash back to basic training, featuring scenes so dense with military clichés they should have all been set to “Fortunate Son.” Working slightly better as drama, we experience an extended conversation between Gabriel and a superior, played by Gary Oldman, that seems to take place after the young man has become a Marine but before the world ends. This scene as a whole is far and away the film's best as it escapes the plot and allows the two actors some semblance of character. Without it, the movie would verge on unbearable. And then we flash back further to Gabriel’s life just before joining up, in which we meet his wife Natalie (Kate Mara) and enrich the bond between Gabriel and his son.

The haphazard, choppy editing of “Man Down” is designed in such a way to replicate the confusion and twisted reality associated with PTSD, but its effect is opposite in that it feels entirely like cheap, manipulative devices instead of anything insightful about the human condition. “Man Down” is one of those scripts that plays games with viewer awareness, forcing us to ask what’s real and what’s not, and keeping a mystery what happened to Gabriel’s son or while he was serving our country. Consequently, there are no real people in “Man Down.” There are no characters. There are merely cogs in the plot device machine.

The sad thing is that LaBeouf does admirable work to try to correct for the lack of depth in Adam G. Simon and Montiel’s script. He commits to the role completely, never betraying the film’s shallowness or clichés, and trying his best to find something worthwhile in terms of character. He makes some decisions in the extended scene with Oldman that totally work. He looks like a broken man, cracking from the inside out. There’s a good LaBeouf performance buried deep in this film, and it almost makes the clichés around it more frustrating because of the honest work they smother.

Montiel has proven himself an interesting filmmaker when it comes to analyzing the alpha male in films like “A Guide to Recognizing Your Saints” and “Fighting,” but he never figures out the right approach for "Man Down." At times, the dialogue is so clichéd—“This area’s secure.” “We’re at war, Marine. Nothing’s secure.”—that it approaches parody, and I wondered if that wasn’t intentional. There’s a flashback in which the Marine buys his kid a puppy; the basic training scenes could have been written by a teenager who’s seen too many military movies. And so on. Sadly, it’s more likely just an example of people trying to handle a delicate, complex subject, but falling back on the devices instead of really tackling the material. Clichés are easy. Manipulating audiences is easy. Really addressing a national crisis takes the kind of guts that “Man Down” just doesn’t have. 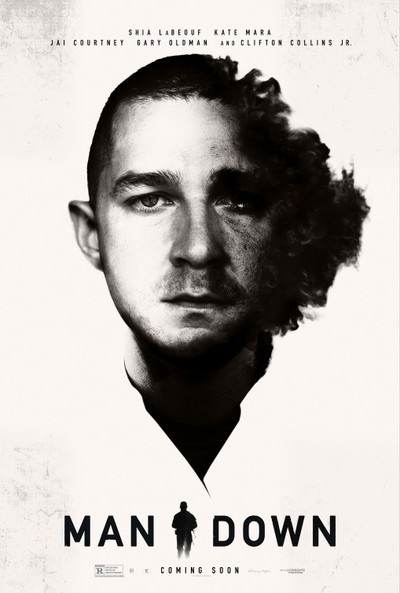 Rated R for some disturbing violence, and language throughout.