"Madras Cafe" arrives in cinemas on the wave of heated controversy; its depiction of Tamil rebels in the midst of the Sri Lankan Civil War has led to outraged protests and a de facto ban on the film in Tamil Nadu even though it's technically been cleared for release there. On the other hand, the Times of India hailed "Madras Cafe" for "div[ing] boldly into material Bollywood hasn't touched before" and for featuring "research, respect, and bravely—no songs" in a four-star (out of five) review, which concludes by warning audiences, "If you like typical Hindi movie masala, unrealistic action or melodrama, this movie is not for you." One could not be blamed, under these circumstances, for expecting "Madras Cafe" to be something revolutionary, or at the very least a provocation, which is why the most shocking thing about it is how dull it is.

A fictionalized—at times more thinly than others—account of the Indian government and intelligence community's actions in the buildup to the 1991 assassination of prime minister Rajiv Ghandi, "Madras Cafe" is told through the eyes of (fictional) protagonist Vikram Singh (John Abraham, who also produced), a military man/intelligence operative pitted against Tamil rebels in Sri Lanka. Vikram finds his efforts thwarted by corruption in his own agency, and eventually stumbles on an international conspiracy to assassinate the (in the movie) ex-prime minister, whom they see as hostile to their business and political interests.

The story itself is an interesting one to say the least, but director Shoojit Sircar and his writers drop the ball badly. The choices about what to fictionalize are confusing, as they might as well have made a documentary except for placing the blame for the assassination definitively on the Tamil rebels; the name of the group and its leader are changed but are still clearly meant to suggest their real-life counterparts. Given Sircar's frequent, direct allusions to Oliver Stone's "JFK," this is almost as if Stone had spent his three strident, passionate hours coming to the conclusion that Lee Harvey Oswald shot Kennedy.

"JFK" quotes—which include a scene where a character who hasn't appeared in the rest of the movie shows up and explains the entire story to the protagonist—aside, "Madras Cafe" most resembles Hollywood films like "Blood Diamond" and "Proof of Life," where American protagonists travel to embattled foreign lands to observe and be moved by strife; Mumbai native John Abraham playing a hero who journeys muscularly to Sri Lanka to get to the bottom of things is a direct analogue. The movie awkwardly positions his fictional character to be on-scene in real-life events, with the climax in particular being a particularly, dare one say, melodramatic example.

The film's dullness is less Sircar's fault and more that of the contemporary Western cinema he draws on so heavily, with its fascination with "gritty" "realism" and the idea that a shaky handheld camera is the entirety of cinema verite. The camera shakes plenty in "Madras Cafe," particularly in the action scenes, which feature plenty of jump-scare bullet ricochet sound effects. But the absence of any sense of where anyone is in relation to anyone else undermines the realism, making the scenes chaotic and ultimately enervating rather than thrilling.

The actors mostly do their best with difficult material. John Abraham plays his stereotypical role as well as he can, and while unspectacular he isn't bad at all. Nargis Fakhri suffers as a British journalist (with, alas, Fakhri's own American accent) given nothing to play. In her defense, it's hard to tell where bad writing ends and bad acting begins in "Madras Cafe." It's virtually identical to the kind of assembly-line American "serious" would-be prestige movies that directors like Ed Zwick and Taylor Hackford crank out in misbegotten doomed bids for Oscar nominations, and just as forgettable in the particulars.

It's really a shame "Madras Cafe" is so inert, because, as above, the things it's about—espionage, geopolitics, corruption—are interesting, and the specific area in which all those subjects play out is one that hasn't been overdone as a film subject, especially outside of South Asia. If, somehow, "Madras Cafe" leads to a movie being made about the Sri Lankan conflict that's actually good, then it will have accomplished something, but until then, it's really not much. 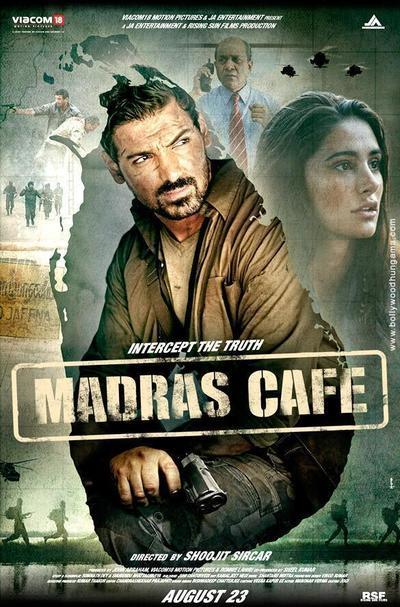