Rebecca Halpern's "Love, Charlie" is an admiring history lesson about one of Chicago's greatest chefs, Charlie Trotter. At its peak in the '90s, his Chicago restaurant Charlie Trotter was considered one of the best in the world. Trotter achieved celebrity status alongside the TV chef ascendance of Chef Emeril Lagasse and could count Anthony Bourdain, Chef Wolfgang Puck, and countless visitors as his fans. And some of his former collaborators, like Chef Grant Achatz, now of Chicago's gastronomic miracle Alinea restaurant, can share kitchen stories of interactions that are equally filled with terror or awe.

A certain level of dedication helps one achieve this greatness and status, and "Love, Charlie" allows the more challenging parts about Trotter to lay as they do. His kitchen, for one, was an intense, cutthroat atmosphere that one could say is par the course for the restaurant industry or not worth romanticizing (this documentary does not do that). Many stories are shared here of his temper and volume when chastising his crew; even his cameo in "My Best Friend's Wedding" has him portraying a version of himself in a frantic kitchen, threatening to kill an employee's family if they screw up. It was an in-joke that came from a particular place, however much it was meant to be a parody.

"Love, Charlie" recounts Trotter's various achievements that have impacted how we think about, look at, and experience food. He was considered a forward-thinker when it came to providing more vegetarian-friendly dishes; his cookbooks shot food in sumptuous close-up, with Achatz lovingly calling it "pornographic"; he put a special table in the middle of the kitchen for patrons to appreciate the process that went into their foods.

The editorial assembly and talking-head presentation of "Love, Charlie" is a bit too dry for my taste, struggling to build an intriguing pacing with and-then-this-happened storytelling. But the emotional power of the film benefits from its extensive archive and how it displays it. Through countless letters and photos, Trotter feels to be an active presence in the movie, with Halpern cutting to close-ups now and then of his tiny but microscopic penmanship. Collected mainly by his first wife, these different artifacts allow him to be the chorus in this retelling of his story. When "Love, Charlie" reaches a particularly tough part of his life, after the restaurant has closed and isolated him from his working self, he hauntingly writes: "If you ever go through a recluse period, my friend, make the most of it."

"Love, Charlie" throws around the word "enigma" when trying to sell Trotter to viewers without embracing all of him. It's a key term, as enigmas are mysteries and contradictions. Halpern's documentary does best when its tone can balance admiring his achievement and staying honest about the bridges he burned, the employees he seemingly worked to the ground, or the toll his passions took on him. Halpern's film doesn't try to have all the answers about Trotter so much as to stand back and look at all the pieces together.

Now playing in theaters and available on Apple TV+ and Amazon. 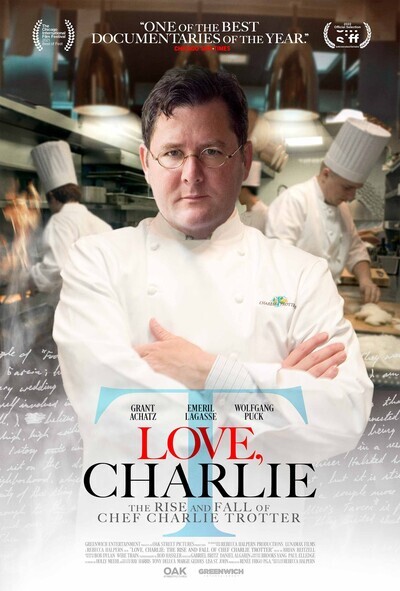