Madeleine (Adele Haenel) does not know that she is a character in a rom-com. She thinks she's in a war movie. Or, better yet, a dystopian post-apocalyptic movie. Anything but a rom-com. She does not smile until an hour and 20 minutes into "Love at First Fight," a new French rom-com, directed by Thomas Cailley. It's a bold and refreshing choice to have the lead character in a rom-com be this uningratiating, and this deadpan. The screwball dames of the 1930s may have had their quirks, and certainly gave as good as they got in any linguistic battle, but they didn't hold out as long as Madeleine does. Madeleine's out-of-place quality is what gives "Love at First Fight" (with the much better French title "Les Combattants") its tension and humor. All of the familiar rom-com tropes are here, but they feel up-ended, twisted inside-out. Stereotypical gender roles are almost completely reversed. Cailley (who also co-wrote the script with Claude Le Pepe) keeps that tension activated beautifully and humorously (the film is very funny), until almost the very end.

Madeleine and Arnaud (Kevin Asaïs) "meet cute" during a self-defense class held on the beach of their little seaside town. At first Arnaud refuses to fight her ("I don't hit girls") but eventually they start wrestling and she treats it as though she is in training for a "Rambo" movie. He's mortified by the experience, but, of course, as the title says, he falls in love with her immediately. Who was that unsmiling ferocious blonde in a racing swimsuit and cargo pants who had me in a glorious choke-hold in front of all my friends? Arnaud works in the family business (carpentry), biding time until he knows what he wants to do with his life. That's the case with all of the young adults in "Love at First Fight." They've dropped out of college. They have nothing to do. One of Arnaud's friends is moving to Saskatoon (Arnaud says, confused, "I thought you were moving to Canada."). "France is rotting," says one of the guys. "There's nothing left here."

Arnaud gets to know Madeleine a little bit, since he is working on a garden trellis in the backyard of her parents' house. Arnaud is shy, and completely overwhelmed by her. She is convinced the entire world is doomed, and in a matter of years civilization will end entirely. Only the strong will survive. To prepare, she puts raw fish through a blender, and drinks it like a smoothie. At a dance club with Arnaud, she rolls her eyes at the "dance floor sluts," silly girls devoted to silly lives. She thinks people who have fun are delusional. She dropped out of her Master's program and is planning on joining the Army. She wants to be a Ranger, because their training is the most difficult. She takes long swims in the pool with heavy tiles strapped to her back. "Combat swim," she informs Arnaud. Arnaud invites her over to have dinner with his family, and she regales the table with a monologue of the dystopian horror coming down the pike at all of them. "Well. This is cheerful," remarks Arnaud's mother. But Arnaud is enraptured. He finds Madeleine funny. Madeleine is funny. Arnaud mentions he likes cats at one point, and she says bluntly, "Do you know if you die, your cat will eat your face in 3 days?"

The tension of the unknown future is intensified by the presence of a brightly-colored recruitment van for the French Army, parked by the beach boardwalk, holding workshops, signing people up. Arnaud has already made the decision to be a woodworker like his recently-deceased father, but upon meeting Madeleine he thinks maybe he wants to join the Army too. Just to be with her! She barely seems interested in him as a potential mate, and probably considers romance superfluous in the end-of-world scenario of her dreams. But the two of them sign up for a two-week training camp where they will live in barracks, play paintball war games, and go through physical training exercises.

Madeleine assumes she will be the best at the camp since her entire life is already a training montage. But things don't go as planned. The camp isn't rough enough for her. She's upset that her bed is clean and nice. The fact that they eat in a cafeteria is disgusting to her. Don't these people know that they will all have to forage for food in the wilderness by, like, September? When discussing dispersal tactics in a classroom, the teacher looks frankly dismayed when Madeleine suggests that in such moments it is "every man for himself."

How can love blossom with such a creature? Does Arnaud know what he's getting into? He's such a sweet and shy person and she's such a powerhouse. Both actors give incredibly charming and funny performances, never betraying their characters by condescending to them, or over-playing the "quirks." The way Arnaud looks at Madeleine helps us understand how to perceive her, and Adele Haenel manages to suggest that Madeleine is, in actuality, a funny and sweet person herself, but has chosen to button all that up in the name of being realistic. She has "seen the light," and if nobody else has, well, that's too bad, at least she's prepared for the apocalypse.

Cailley's direction is confident and un-fussy (it is his first feature) with sparks of intense beauty (deep blue and black night scenes, waves of smoke filling the sky from a nearby forest fire) reflecting the mood of any given scene. He has an excellent eye for behavior, and an excellent ear for dialogue. What matters in a movie like this is the relationship. Cailley understands that, and keeps his approach simple and transparent.

The final sequence of "Love at First Fight" swerves into melodrama and adventure, with a sudden re-assertion of traditional gender roles that practically reaches the level of damsel-in-distress-tied-to-railroad-tracks. Some may be disappointed by that development. I wasn't, because by that point the real heavy-lifting had been done: the characters were so established, and the investment in their strange little romance was so strong that it could not be destroyed. When these two characters finally kiss, it really meant something. And when Madeleine suddenly turns to Arnaud, late in the film, throwing a huge happy smile his way, I realized how effective "Love at First Fight" really had been. It's not that she had been holding that smile back in the earlier scenes. You don't feel that way at all: although Haenel's performance is extremely funny, the character's humorlessness seems to go to the center of her being. But the circumstances of the unfolding story, Madeleine's experiences over the course of it, her friendship with Arnaud, all have mixed together to make that big smile possible. And best of all, the character is not compromised. Madeleine remains herself. Arnaud wouldn't have it any other way. That's kind of beautiful, if you really think about it, and so is "Love at First Fight." 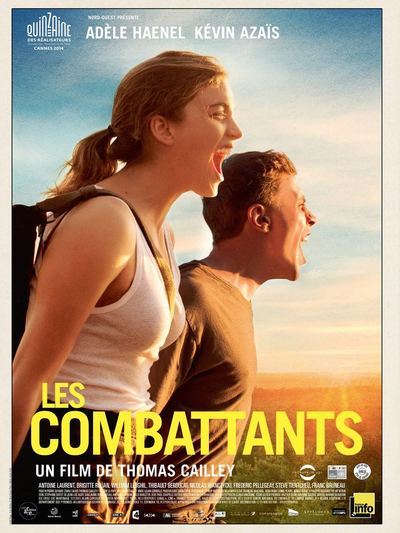