We all know what the Hallmark Movie Channel version of this story looks like. A middle-aged woman with two grown sons lovingly cares for her husband in his last days and mourns his loss. Then, after a couple of awkward, conflicted attempts, she begins to open her heart to a new romance, and we all have our hearts warmed by the resilience of the human spirit and the reassuring notion that there is love after loss. We know what the Lifetime version would look like, too. A beautiful, plucky widow finds that her adult sons pose a threat to her chance to find new love.

Both versions of that story are TV-movie perennials. But “Love After Love” is different. This first-time feature from writer/director Russell Harbaugh has an understated, intimate, pointillist style, with a cool jazz score that matches its improvisational tone. The structure is offbeat in the most literal sense, showing us the small moments in between the usual movie scenes and trusting us to understand their significance without explanations. Most movies go for clarity by heightening the drama, with one emotion on screen at a time as though delivered by semaphore. In this movie, things are always a little messy, a bit smudged around the edges. Like life.

We first see Suzanne (a radiant Andie MacDowell), perched on a window seat, talking to her son Nicholas (Chris O’Dowd) about happiness. She tells him that her sons make her happy, and cheekily adds, “and your dad’s pretty good in bed, too.” Then they go outdoors to join one of several gatherings of friends and family we will see throughout the film.

Suzanne’s husband gets up to recite a poem. His raspy voice and the cigarette in his hand hint that he will not be around long, and by the next scene he is in bed, close to unconscious, with a harrowing extended death rattle. Suzanne cares for him devotedly. Nicholas and her other son, Chris (James Adomian), are there to help but both are a bit lost. “He doesn’t want us here—this is embarrassing,” one of them says, as they help their father to the bathroom.

And then he is gone. After the heart-wrenching sound of his labored breathing, the clanking of the gurney is unbearably mundane and mechanical as they take him away.

We then get a series of glimpses, mostly moments that seem insignificant, at least to the characters, as they try to manage their grief. Chris gets drunk at another family gathering and he talks about losing his dad in a stand-up routine. Nicholas tries to lose himself through women, breaking up with one, getting engaged to another, making an oafish play for a third and trying to reconnect with a fourth. Suzanne snaps at one of her colleagues, than apologizes, laughing a little because she knows it is about her feeling out of control.

And then there is another gathering, back at Suzanne’s home, with two new people at the table. Nicholas makes a toast, poorly disguising his hostility. “To Michael and to this special thing that’s happening right before our eyes even though we’re desperately trying not to notice it is, and I think that it’s right that we try to celebrate that.” The newcomer responds with more grace. “I thank you for welcoming me here, however you have, it can’t have been easy.”

It isn’t easy, and it quickly gets even harder. As miserable as grief is, it somehow feels safer than letting it go. Chris admits. “It’s almost worse how easy it is to get over grief.”

MacDowell is a wonder here, her exquisite face utterly open to all of Suzanne’s experiences and emotions. Suzanne understands that she can love her sons without always respecting their choices, and she can care about their happiness without giving up what she wants just to demonstrate what they think is the right way to grieve. And we understand that the gift of the film is seeing MacDowell give Suzanne and her story the grace and depth they deserve. 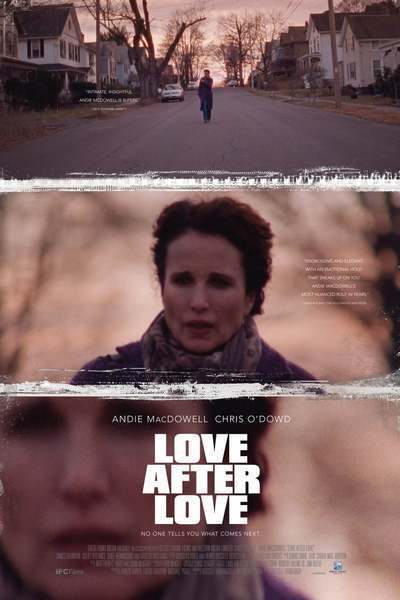