Howl, little wolves, howl, for your hearts are filled with love that still runs wild.

As if it were a fable whispered in your ear by a soothing voice, “Los Lobos” ("The Wolves") radiates melancholic warmth with its story of a mother and her sons starting from scratch in a foreign land. Told with unassuming force by Samuel Kishi Leopo, the Mexican director’s second semi-autobiographical feature doesn’t overlook the harsh truths but returns to hope; it is capable of both wounding and healing one’s heartstrings with its gentle touch.

Figments of memory, patches of non-fiction, and outbursts of animation harmonize as the director, whose previous coming-of-age story “We Are Mari Pepa” centered on a teen rock-band, begets a fresh entry into the pantheon of thoughtful studies on young lives. “Los Lobos” shares ranks with Sean Baker’s “The Florida Project” or Jeremiah Zagar’s “We the Animals,” rather than with tired immigration dramas.

Meditative landscape images, courtesy of cinematographer Octavio Arauz, track the passage from Tlajomulco, Jalisco to Albuquerque, New Mexico, where Lucía (Martha Reyes Arias) aims to resettle with her two children. A disheveled apartment, the only one she can afford, becomes a precarious blank slate for them to build a home. As the plot slowly advances, the place evolves once they’ve made it, humbly, their own.

Despite not crossing the border through dangerous avenues, Lucia lacks documents to legally work stateside, and must take on multiple grueling labor jobs—not unlike countless others immigrant parents. She has no choice but to leave her beloved baby wolves, as she calls them, alone. Inside their kingdom of imaginative innocence, a carpeted space without much furniture, real-life brothers Maximiliano and Leonardo Nájar Márquez mine magic from the humdrum hours waiting for mom to return. Small, yet markedly specific details of childhood, such as the “Chumbala Cachumbala” kids song about dancing skeletons that Leo recites effusively, or the plastic luchador figures that take part in their fraternal playground, brim with lived-in sincerity.

“Los Lobos” is heavily laden with precious moments that emerge from a combination of what Kishi Leopo and his co-writers Luis Briones and Sofía Gómez-Córdova fabricate, how the actors interpret it, and the reality of where the story is set. This includes the three-member wolf pack’s efforts to preserve their grandpa’s voice, to a Día de Muertos ofrenda and makeshift Halloween costumes, or the dark symbolism behind a light bulb.

Handcrafted animated sequences, stylized to give the impression that the brothers drew them with crayons on the walls or on discarded pieces of paper, further our understanding of their culture shock and tough adaptation process. In these segments, created by Guadalajara-based studio Platypus Animation of which Kishi Leopo is a co-founder, Max and Leo appear as their ninja wolves alter egos, adorably cartoonish creatures that capture their state of mind and brotherly love.

For the more prominent live-action component, Arauz’s expertise with natural light, and the manipulation of it, graces the frames with a subtle brightness. Likewise, his purposely-dynamic compositions and camera movements match the protagonist’s raw energy and avoid a claustrophobic experience. Just as the boys find ways to make the most of their limited assets, Arauz also embraces that resourceful dogma. It’s also fitting that the director’s own younger brother, Kenji Kishi Leopo, composed the perfectly low-key, string-driven score.

Unable to fully grasp the complexity of their circumstances, Max, the eldest, lashes out against his mother when he feels she’s not following the bylaws she imposed. Maximiliano Nájar Márquez’s gaze, overflowing with contained rage, pierces through the screen like it does through Lucia’s heart. “We want to go Disney. One ticket, please,” demand the sweet boys in the broken English they’ve memorize at their mother’s instruction. But Lucia knows such a trip is not feasible, not for a long time at least. Disneyland stands as the ultimate promise of a seemingly unattainable happiness on United States soil.

Kishi Leopo looks brightly at Lucia’s position, of a mother doing her best to survive adversity, with the same empathetic lens used to explore the children’s perspective. In an extraordinary turn, Reyes Arias projects the unbearable sadness that haunts Lucia through her tired eyes and the little smiles she musters the strength to put on. Lucia knows that Max and Leo’s well-being hangs on her ability to not succumb to despair, and that includes never forgetting rule #7: to always hug each other after a fight.

Also praiseworthy is that although the intimate narrative unfolds in a mostly Latino, disadvantaged community afflicted by drug addiction, gang violence, and poverty, the director engages with it not exploitatively but with honest care for the real people who exist in the periphery, and eventually become part of his fiction. To that end, Kishi Leopo features tableaus of the area’s actual residents, from all walks of life and all racial backgrounds, throughout the film, as to document these often-invisible individuals.

In how he approaches the immigrant experience, partially based on his own, the inspired filmmaker tacitly admits his belief in the everyday kindness of others even in the most challenging of scenarios. Take for example the Chinese landlords, especially Mrs. Chang (Cici Lau), who procures the boy’s safety for no other reason than her immense humanity; or the American-born kids of Latino descent who find themselves in situations of clear neglect, and ultimately only desire companionship. Kishi Leopo refrains from minimizing the issues these supporting players face, and even touches on the fact that many immigrants find solace from their hardships in evangelical churches. Each element has been written or folded in from reality with great attentiveness to represent this world truthfully.

A miracle of emotional precision and tenderhearted storytelling, “Los Lobos” is a major work from an artist with a precious sensibility for portraying the purest expressions of sorrow and joy. Don't be misled by its intimate demeanor, because its beautifully explored themes and the impeccable execution have the power to swiftly melt you into a puddle of tears. In a world so severely lacking compassion, Kishi Leopo’s latest feels like the cinematic equivalent of a tight embrace that reminds us we can howl ourselves out of any storm. 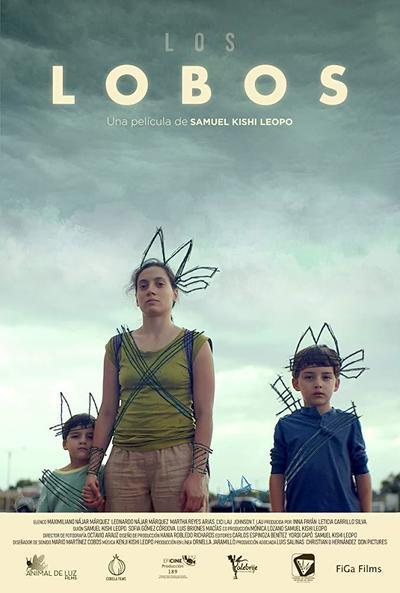