Time moves differently in "Long Day's Journey Into Night," a sensuous, dream-like Chinese drama set in and around the Southeast mainland city of Kaili. The first half of the movie—which only shares a title with Eugene O'Neill's play of the same name—is a disorienting mix of flashbacks and flash-forwards. We follow emotionally withdrawn drifter Hongwu Luo (Jue Huang) as he chases after a woman that he can only vaguely recall. He remembers her in stages: each new place that he revisits—physically and in his memories—brings him closer to her, a woman who may or may not be the enigmatic Kaizhen ("Lust/Caution" star Wei Tang). Or maybe her name is Qiwen Wan, like the movie star. It's hard to tell since time slips through Luo's fingers as easily as the rainwater that darkens Kaili's skies and then seeps into the foundation of almost every building. This is a city—and a mind—that's perpetually on the brink of collapse. How do the locals survive? Why is Luo looking for Kaizhen? What's the point of this story?

The answer to these and many other questions are a matter of faith. Because "Long Day's Journey Into Night" is a slow, fragmented drama that has become somewhat renowned for its inclusion of an hour-long 3-D tracking shot that only occurs about halfway through the movie. And because Luo's quest is, for the most part, about blind devotion. Everybody he meets is missing something, though they stubbornly try to do without it. A dead parent, a missing friend, a dog that doesn't hunt (or smell) as well as he used to ... and a girl that got away. Everything's breaking down around Luo, but some things endure, mysteriously, inevitably. Writer/director Gan Bi ("Kaili Blues") asks viewers to follow Luo as he drives, walks, and sometimes flies around Kaili in search of the woman of his dreams, hoping to achieve the same kind of magical personal breakthrough as everybody else: everything will be all right if I can get ___ back.

"Long Day's Journey Into Night" forces viewers to be simultaneously hyper-aware and un-self-conscious about the fact that they are watching a movie that, in several scenes, is presented in real time. Like the movies of arthouse godfathers Andrei Tarkovsky and Kar-wai Wong, Bi's movie is slow and melancholic. He encourages viewers to feel their way through modestly-scaled, impressionistic moments of beauty that are inevitably blurred by his characters' subjective, imperfect memories. These moments seem to go on forever, especially in the first half of "Long Day's Journey Into Night," when Bi's characters are surrounded by fogged-up mirrors, rippling puddles, and shuttered doorways. Corridors seem to lead on forever and there's always another room—or building, or street—beyond the one we're looking at.

You really have to feel your way around "Long Day's Journey Into Night" since so much of Luo's progress can only be understood by the way that he, during the movie's 3-D section, imagines a reality that's more sensible than the one he's drifting through during the movie's first half. Think of the way that our minds use dreams—and movies, as Bi points out when he sits down to watch a 3-D film in a crumbling Kaili theater—to recycle our waking anxieties for the sake of creating a new narrative about ourselves. Now imagine a story where the dream/movie version of events is just as confusing, if a bit more soothing, than the waking world that Luo (the audience's stand-in) comes from. In this dream version of events, characters are capable of making progress. Even if there's always a conditional element to that progress: if Luo beats a nameless 12-year-old (Hong-Chi Lee) at ping pong, then the boy will show Luo how to get home. And if Kaizhen sings one song for Luo, he'll leave her alone. Movies facilitate these otherwise impossible reunions, as Luo explains early on, through voiceover narration: memories are partly true and partly made-up, but movies are all fiction. Thank goodness.

So Luo, a self-described "naive" character, keeps wishing and trying to understand himself better. Everything is breaking down in his corner of the world, so the only way to persist is to dream of small moments of overwhelming beauty or exhilaration: a scooter ride with a long-lost friend; a kiss with a lover; a heroic gesture for a stranger who often gets overlooked. Every step climbed, every song sung, every game played ... it's all a matter of devotion and faith. As I was watching "Long Day's Journey Into Night," I was reminded of a jaw-dropping sequence from Tarkovsky's "Nostalghia," the one where a Russian poet tries to keep a candle lit as he trudges slowly across a seemingly endless pool of water. As a passive viewer, watching this scene was an act of faith: I hoped for a happy outcome and held my breath while I waited. "Long Day's Journey Into Night" is full of such moments: you hold your breath and hope that the moment lasts. 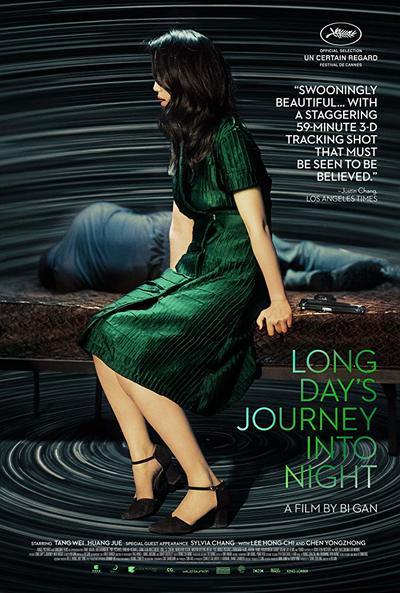