If “Little Woods” had trusted its two leading ladies just a little bit more, it could have been a truly great movie. As is, it’s a very good one that is worth seeing mostly for its cast, especially two leads who are increasingly rising to the top of their generation in terms of ability. Tessa Thompson and Lily James have arguably never been better than they are here in Nia DaCosta’s film about people on the edge of society who are forced into illegal behavior by a system that really does not care what happens to them. And they’re surrounded by an incredible supporting cast, including memorable turns from James Badge Dale, Lance Reddick, and a menacing Luke Kirby. Everyone here is very good to great, which makes it all the more frustrating when the dialogue given to them by DaCosta gets a few shades too literal. With character work this strong, we don’t need someone to say, “Your choices are only as good as your options are.” The movie makes that crystal clear.

Thompson plays Ollie, a woman near the end of a probation period—Reddick plays her officer, who warns her not to get in trouble in the end run before her freedom in a way that people in that role always do in the movies. Ollie’s mother has passed away and she’s having trouble making ends meet. She used to deal drugs like Oxycontin, something we’re aware of early in the film when one of her former clients comes looking for a fix. However, DaCosta’s film is not a movie that castigates junkies and those who feed their addictions. It has more empathy than that. The client has a horrible injury and he just needs to keep working. He’s one of many people in this country who get addicted to painkillers for their literal purpose—to ease the pain so they can get through the day. He can’t afford to take a day off work to get it fixed medically. He can’t afford to lose his job. He literally needs the Oxy to make ends meet.

But Ollie isn’t dealing anymore. She’s gone clean, despite the constant pressure around her to go back to her old ways. That pressure is intensified when the bank forecloses on her house and then her sister Deb (James) gets pregnant. There’s no easy financial fix to either problem. Abortions aren’t easy or cheap, and Deb discovers that a pregnancy with no health insurance costs close to five figures. Ollie is pushed back into dealing to solve both dilemmas, first casually and then with increased intensity to get what she needs and get out again.

“Little Woods” is full of wonderfully nuanced character beats. James and Thompson battle for who gives the better performance, both of them embodying a world-weariness that has infected so much of this country in places where the economics of daily life feel increasingly unmanageable. But they don’t sink into the archetypes these characters could have easily become. They’re two of the best performances of the year so far, almost more impressive in the little beats than the plot-driven ones. It’s in the look James gives when she’s told how much delivering a baby costs or realizes that a journey to get a fake ID could suddenly be very dangerous; it’s in Thompson’s defeated body language when she realizes everything could come crashing down.

The larger problem here is with DaCosta's script—characters too often say exactly what they’re feeling or need in ways that make them sound like mouthpieces for a writer instead of real people. It doesn’t happen often enough to detract too much from appreciating “Little Woods” as an acting showcase, but just enough to make one wish it was a more subtle film overall. In the end, it’s a film that feels deeply inspired by “Frozen River” and “Winter’s Bone,” other movies that went to depressed, unsafe parts of the country and allowed their leading ladies to really get under the skin of those who live there. "Little Woods" deserves to be mentioned in the same breath as those films. 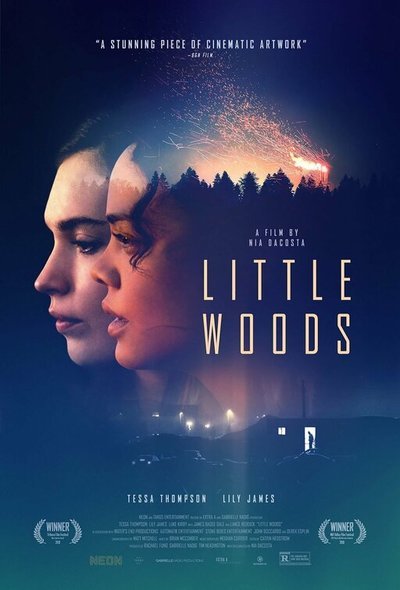 Rated R for language and some drug material.