Mother: “When you were growing up, Dad and I thought you’d become a lesbian Satanist.”
Daughter: “Sometimes I think you’re sad I’m not.”

It's a powerful indication of just how well "Little Sister" works that the above exchange does not come off as "quirky," or "kooky," or a "black comedy" ba-dum-ching punchline. The words make total sense in context, and the mood is one of sadness, regret, and a chastened mother-daughter closeness after years of estrangement. Zach Clark, who wrote and directed "Little Sister," pulls off many such moments—precise and delicate—in his film. "Little Sister" is about many things: family relationships, the intersection of the personal and the political, how faith provides comfort in a chaotic world, how decisions made far off in Washington impact citizens in life-changing ways. There are no blaring headlines of Meaning in "Little Sister." It's a quiet and gentle film, emotional but not manipulatively sentimental, sad but not nihilistic, Marilyn Manson epigram and Goth-font chapter markers notwithstanding.

The film's title has a double meaning. Colleen Lunsford (Addison Timlin) is the "little sister" to an older brother, and also a novitiate waiting to take her final vows to become a nun. Living in a convent in Brooklyn, she is devoted to her faith, and to the "good works" aspect of it, soup kitchens, helping the elderly. She is a shy young woman, dressed in cardigans and denim skirts, so quiet that she barely registers as a presence. When her mother sends an email filled with exclamation points summoning her home, Colleen asks the Mother Superior (scream queen Barbara Crampton, a great casting choice!) if she can borrow her car for a short trip home. Colleen's older brother Jacob (Keith Poulson) returned home from a tour in Iraq with his face burnt beyond recognition. He now lives as a recluse, refusing to leave his room. He and Colleen were once close. Maybe Colleen can help.

Once Colleen returns home, she is sucked back into the dysfunctional family dynamic, and into who she used to be. Her room—from her teenage years as a Goth—has remained the same: black-painted walls, an upside-down cross (which she quietly turns right-side up). Her mother Joani (Ally Sheedy) is a stoner and a depressive, with scars on her wrists from a suicide attempt, and a simmering sheen of hostility when dealing with her daughter. (Sheedy is another great casting choice, Joani calling to mind associations of the depressed teenager she played in "The Breakfast Club": Joani could be that kid all grown up.) Joani is paranoid and feels judged by her daughter, although Colleen is not a judgmental person at all. Colleen tries to re-connect with Jacob, but he's not having any of it. He is embarrassed to be seen in public. His fiancé, Tricia (Kristin Salesman), lives with the family, and is devastated at his rejection of her. She doesn't care that his face is burned. She still loves him.

All of this takes place in October of 2008, during Obama's first Presidential campaign. There are Obama/Biden signs on every lawn. The Presidential and VP debates are on television. So much of life has a political backdrop (now and always), but so many films take place in a world where politics are non-existent. Here, it's a living and breathing reality: Jacob was sent to war and he returned home destroyed. Political decisions have affected the family in extraordinarily intimate ways. The hope that Obama may represent is an emanation coming through clouds of pot-smoke and Gen-X cynicism. While the culture has come a long way from protestors spitting at Vietnam veterans, there is still a huge disconnect between "Support Our Troops" bumper stickers and how civilians treat wounded veterans. People cringe away from Jacob when they see him out in public, they can't deal with the reality that he represents.

Colleen makes tentative advances into her brother's room, trying to connect with him to no avail. Finally, in an act of desperation, she dyes her hair pink, puts on black lipstick and a white nun's habit, and does a lip-synced version of GWAR's "Have You Seen Me?" for her brother that does, indeed, turn his frown upside-down. It reminded me so much of that great sequence in 1954's "A Star is Born," where a desperate Judy Garland performs "Someone at Last" for her depressed husband (James Mason), turning herself inside out to cheer him up. An act of love. Colleen's actions are a way of saying to Jacob, "I know I'm different now. But I am still the same person. I have not abandoned you. I love you and I want you to be happy."

Colleen reunites with her high school friend Emily (Molly Plunk), who is now the kind of animal activist too "out there" for even PETA. Colleen has her first beer. She vomits after having two. She jokes to Emily that she has a "lifetime membership V-card." Meanwhile, Mother Superior - with her blunt haircut and blue power suits - keeps calling, wondering when Colleen is planning on returning. "Little Sister" is so refreshingly accurate in its portrayal of what it's like between close siblings, the short-hand, inside jokes, awkward affection. If you only judged from films, you'd think that adult siblings never got along with each other. It's an extremely specific kind of dynamic, and Zach Clark understands it so well, as do Paulson and Timlin, who are beautifully believable as brother and sister. Their relationship is the heart of the film.

Daryl Pittman's cinematography immerses the film in elegiac autumn, flaming autumn leaves, chilly fog, frost on the grass, bright October sunlight. The use of interspersed home-movie footage of Colleen and Jacob as kids is cute, showing their ghoulish childhood interest in horror and vampires and death, but it's also a cliche. In a film that resists cliche almost entirely, it's an "off" note. As Colleen's visit marches towards Halloween, the look of the film gets more and more fantastical and surreal, culminating in an impromptu (and insane) family Halloween party. These people are all nuts. Aren't we all.

In its radical yet thoughtful way, "Little Sister" insists that bridges—in us and in the culture—can be gapped, abysses can be crossed, divisions are not permanent. Colleen's transformation back into her Goth self is not a betrayal of who she is now: both aspects—the Goth and the nun—are true. Acceptance of complexity, acceptance of contradictions (without feeling the need to resolve one way or the other) ... these are signs of psychological and political health. Zach Clark makes his points, but he doesn't make a point of making his points. His directorial touch is gentle. It makes all the difference. 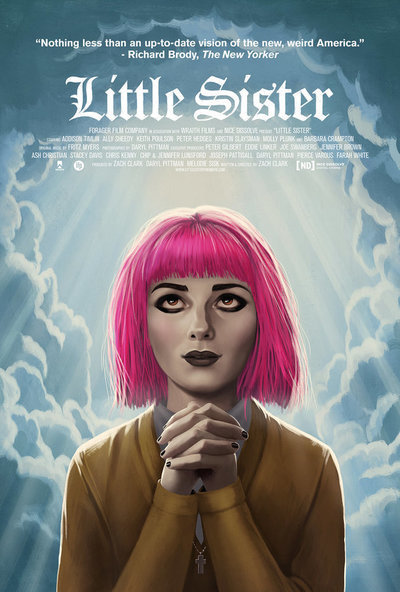 Barbara Crampton as The Reverend Mother