“Little Joe” is a cautionary tale about a mother who’s too busy with work to notice that her teenage son has been infected by the pollen from an evil plant—a plant she designed, named after him and brought home as a gift.

Actually, that description makes the movie sound far more bizarre and compelling than it is. Austrian director and co-writer Jessica Hausner has taken an austere approach to her sci-fi horror film, both visually and tonally, which is an intriguing choice in contrast with its wild central idea. But it ultimately results in a cold, unsatisfying experience, and a yearning for Hausner and co-writer Geraldine Bajard to have said something as bold as the film’s color palette.

The antiseptic aesthetic of a behemoth British biotech lab gets awakened by bursts of color: the dark green of the cafeteria chairs, the light blue of the locker room and, increasingly, the menacing haze of the hot-pink glow from grow lights that hover over rows upon rows of designer plants. The plants themselves—which lead scientist Alice (a chilling Emily Beecham) affectionately names Little Joe after her own human boy (Kit Connor)—are an explosion of crimson, with soft tendrils that seem to dance as their buds open. It’s as if they’re shyly saying hello—or subtly trying to enslave you.

In theory, Alice and her team intend for these to be “mood-lifting, anti-depressant happy plants.” And maybe there’s some sort of message here about the dangers of seeking shortcuts to wellbeing, rather than actually doing the work. Alice, an emotionally detached single mom, is herself in therapy as we see from a few of her sessions. Working with cinematographer Martin Gschlacht, Hausner slowly and hypnotically moves the camera back and forth during long takes between Alice and her therapist (Lindsay Duncan). The conversation, however, seems to go nowhere—although maybe that’s also the point.

What’s happening right under Alice’s nose (if you’ll pardon the pun), is that the plant she’s developed emits a pollen that initially elicits a sneeze, followed by total devotion. The people inhaling it don’t behave all that differently—but they also don’t seem overwhelmingly happy, either. Rather, they seem weirdly flat, like placid zombies—an indictment, perhaps, of a reliance on pharmaceuticals to even out emotional highs and lows.

There’s an eeriness at first to the human interactions that result from exposure to Little Joe—an awkwardness in the inability to connect comfortably. This is especially evident when Alice’s colleague Chris (Ben Whishaw, playing against nice-guy type) tries to woo her, first with nervous invitations to after-work drinks, then with tentative attempts at kisses. The plant’s effects on another scientist’s emotional support dog—normally a sweet-tempered, playful creature—also create an underlying tension. But then the Japanese-inspired score—heavy on strings and drums, mixed with the surreal sound of dogs barking—provides an even more obvious jolt. It’s another bold stylistic choice, one that’s initially startling but eventually overbearing.

A subplot involving the human Joe and his first girlfriend, a confident young lady named Selma (Jessie Mae Alonzo), suggests the film’s true source of anxiety. Alice’s little boy is growing up and becoming his own person, one she doesn’t recognize anymore with a life and interests outside her own. It’s a sad realization for any mom. Then again, she might just be paranoid, and Hausner seems content to allow us to interpret the film’s meaning in a multitude of ways.

“Little Joe” never ventures anywhere near full-on terror mode; it’s more like a dryly British “Little Shop of Horrors.” And frustratingly, the film never fulfills the promise of its stylish weirdness. Instead, it steadily builds to nowhere, resulting in a collective shrug—and maybe another sneeze. 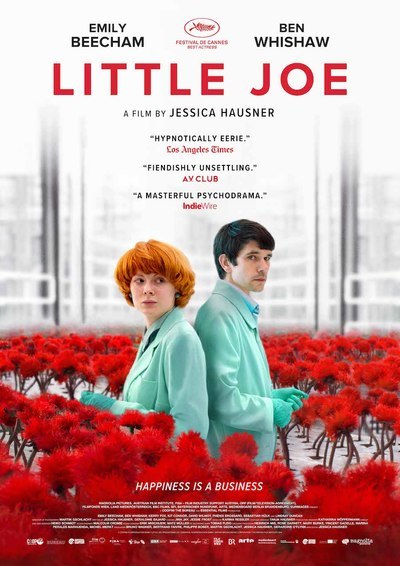