“Little Fish” would have left a lingering, wistful feeling under ordinary circumstances. Debuting during a pandemic, however, adds a layer of poignancy to this story of a worldwide virus that causes memory loss, creating loneliness and isolation for both its victims and their loved ones.

The timing is purely coincidental. Director Chad Hartigan’s film, from a screenplay by Mattson Tomlin, is based on an Aja Gabel short story published a decade ago. And yet there's the inescapable sense that “Little Fish” is speaking directly to the times in which we live, quietly urging us to hold onto what’s dear. While the symptoms of this illness are different from the ones people with Covid-19 experience, the images we see during the response to it are eerily familiar. People wearing surgical masks sit in waiting rooms, anxiously filling out paperwork on clipboards. Televisions blast news 24/7 about the spread as well as the hope that a clinical trial may bring. And eventually, confusion gives way to panic, inspiring mobs to clamor outside hospitals, pounding on the glass doors, seeking aid—or at the very least, assurance.

In the midst of this madness, Emma (Olivia Cooke) and Jude (Jack O’Connell) fall in love and get married. She’s a vet tech at a Seattle animal shelter. He’s a photographer and former addict who’s been clean the past five years. After a meet-cute on a secluded beach with the help of a sweet and scruffy dog named Blue, the two quickly click. Hartigan jumps around in time, treating us to the early, giddy days of their romance through impressionistic whisps: plunges at a water park, sparklers at a backyard party, stolen kisses at a nightclub. These moments, which feel so free and fleeting, will take on greater significance as the film progresses. And while this kind of gauzy montage initially may seem like an overused, indie-film device, its ethereal tone is relevant in telling a story about the elusive nature of memory.

“Little Fish” ponders the question of whether it’s better to lose your memory all at once and get it over with or to watch it slowly slip away in drips and drabs. We see subtly chilling examples of a marathon runner who forgets to stop once her race is over, or a bus driver who pulls to the side, gets out, and starts walking down the street, stranding his passengers. Emma explains in understated voiceover that these anecdotes fascinated her at first—there was almost a romanticism about them. But then the disease hits home when she begins seeing evidence of it in Jude. The mystery of this illness—which can claim anyone at any time, regardless of age or previous health condition—is the way it suddenly turns the mundane into the terrifying. How much of it is that you’re simply bad with names and dates, and how much is the onset of something more debilitating? Hartigan never strikes a hysterical tone, resulting in realistic horror within the recognizable confines of daily life.

While the first half of “Little Fish” has a melancholy vibe, the second half has a more insistent energy, as Jude increasingly struggles to recall details large and small. Seemingly borrowing from “Memento,” he writes notes to himself on the back of Polaroids. (And maybe it’s a little on the nose that Jack’s chosen profession is capturing moments in time through pictures.) Others, like Jude’s longtime musician friend Ben (Raúl Castillo), tattoo important bits of information on their bodies. In an image out of post-apocalyptic sci-fi, Emma spots a sign at a tattoo parlor, offering 80% discounts for people to ink themselves with pertinent personal details they might otherwise forget.

Through it all, Cooke and O’Connell maintain a natural chemistry, one that’s sweet and playful at first but eventually turns to longing and heartache. Tomlin’s script cleverly revisits key moments in their relationship with Jude and Emma hovering around the edges, correcting each other, making slight tweaks to the color of a dress or who said what witty line to whom. The stars achieve the tricky task of finding the humor that exists alongside the sadness in these scenes. And the gently haunting score from Keegan DeWitt highlights that this is a race against time, albeit one that’s taking place with significant headwinds.

“Little Fish” leaves an unshakable impression: that the people we love have the power to connect us with who we are and what matters to us in ways that cannot be broken. 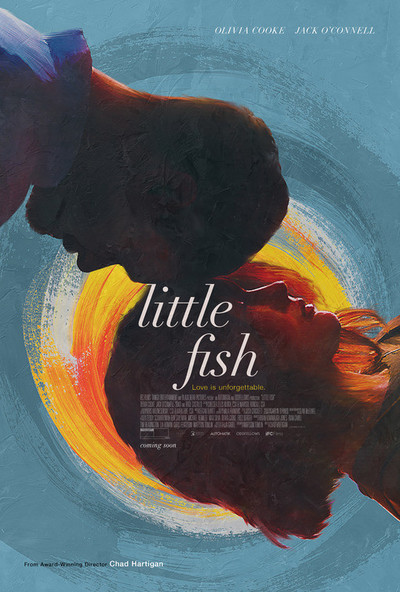