The little boy at the center of “Little Boy” pulls a stunt repeatedly which, ostensibly, is intended to be poignant. Eight-year-old Pepper Flint Busbee (Jakob Salvati) sticks out his fingers, scrunches up his face, squints his eyes, screeches with all his might and wills an object to move. Maybe it’s a glass bottle. Maybe it’s a mountain. But sure enough, through the power of magic or trickery or a well-timed seismic shift, he achieves his goal.

Eventually, he tries to use this “ability” to bring home his beloved father from battle in World War II. And by this point, his patented move—which was merely shrill and annoying—now seems just plain goofy and even a little crass.

This emotional disparity is emblematic of so much that’s wrong with Mexican director Alejandro Monteverde’s film, which he co-wrote with Pepe Portillo. It’s meant to be a tale of uplift for faith-based audiences, but instead wears viewers down with a heavy-handed narrative, an overbearing score and voiceover that spells out everything in cringe-inducing, folksy tones.

“Little Boy” takes place around the time of Pearl Harbor in the fictional, coastal California town of O’Hare. “Just like you see in postcards,” we’re told, as if we couldn’t recognize its idyllic quaintness for ourselves. The nostalgia is spread thick here like sugary mounds of frosting. Compared to most movies aimed at Christian viewers, though, this one at least has solid production values.

Pepper, who’s small for his age (hence the titular nickname), suffers merciless bullying from the bigger kids. His only friend is his father, James (an earnest and enthusiastic Michael Rapaport), who shares his love of comic books, movies and made-up adventures.

But one day, James has to go off to war in place of his elder son, London (David Henrie), who’s stuck staying home with flat feet. Pepper is understandably devastated to see his father leave, but a sermon at the town’s church about the transformative power of faith inspires him. He visits the priest (Tom Wilkinson, managing to provide substance in just a few scenes), who gives him a to-do list of good deeds to help him bring his father back: feed the hungry, shelter the homeless, etc. It’s a ludicrous notion, of course.

Then he adds a task that sounds like the toughest of all to Pepper: befriend Mr. Hashimoto (Cary-Hiroyuki Tagawa), an elderly Japanese man who has returned home to O’Hare after being released from an internment camp. Hashimoto has been the target of universal scorn during the war—“Little Boy” doesn’t shy away from the cruel racial epithets of the era—and even some vandalism. But, as a favor to his friend, the priest, he reluctantly agrees to spend time with this misfit kid.

The result is an overly feel-good take on the “The Karate Kid,” as the reclusive and misunderstood man becomes a father figure, mentor and protector to this bullied boy, who has a retro version of the Cobra Kai to contend with. Tagawa brings a quiet dignity to the role, which is really more of an idea than a fully fleshed-out character. In a similar waste of talent, Emily Watson gets little to do but worry and weep as James’ long-suffering wife.

Speaking of the cast, there’s a curious overlap here with last week’s “Paul Blart: Mall Cop 2,” which is terrible in a totally different way. Besides that film’s star, Kevin James (who tones it down here as the town’s widower doctor), Henrie had a supporting role in the comedy as a valet parking attendant at the Wynn Las Vegas. And Eduardo Verastegui, who played the hotel’s suave head of security, has a small role here as a fellow priest. (He’s also a producer alongside husband-and-wife Mark Burnett and Roma Downey, purveyors of such faith-based properties.)

But no amount of talent can counter-balance the garish sight of the townspeople cheering for Little Boy, the character, as well as Little Boy, the codename of the atomic bomb dropped on Hiroshima. The mixture of jubilation and death—as well as a fantasy sequence in which Pepper wanders through an ashen wasteland, surrounded by corpses—is all rather queasy-making.

“Little Boy” also milks tears out of a major character’s fate, but the film’s young, blue-eyed star isn’t quite up for the challenge of those heavier scenes, or anything beyond being moppet-like and determined.

There’s no way that a movie like this can do anything but reward such a character for his faith. But even by the standards of this genre, the sentimental way in which the story twists and wraps up is as shameless as it is schmaltzy. 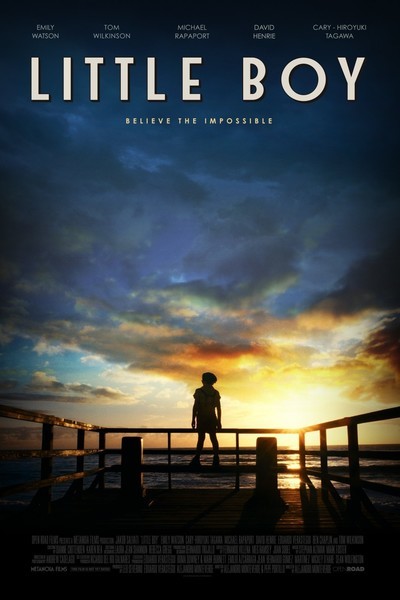 Rated PG-13 for some mature thematic material and violence