That’s a lovely word, lilting. It means the pleasing rise and fall of a voice, usually accented, and so it makes an apt title for “Lilting” the first feature for writer-director Hong Khaou, which concerns itself with a language barrier. Junn (Cheng Pei Pei) is an elderly Chinese-Cambonian woman who emigrated to Britain decades ago but still depends entirely on her son Kai (Andrew Leung). In the first scene, we see the way she manipulates and guilt trips him; she wonders why he is visiting her as if she were “a pet.”Junn, it turns out, has been put into an oddly decorated and sparsely populated assisted living facility by Kai because of her growing forgetfulness. We find out fairly quickly that the conversation she has been having with Kai has been an imagined one, for Kai is dead.

We don’t learn too much about Kai over the course of “Lilting” aside from the fact that he meant everything in the world to his lover Richard (Ben Whishaw), who keeps coming to see Junn and even hires Vann (Naomi Christie), a translator, so that he can talk to her. Most of the scenes in this movie take place at a remove between the people talking, and so there’s an inherent drama in the negotiating process between Junn and Richard; in the things that they say to each other and the things that they say only to Vann. The best scene in the film is a confrontation between them where everything comes to a head, and Vann can barely keep up with their anger and their jockeying for position.

But “Lilting” suffers from a lack of plausibility in its central situation and elsewhere. Scenes with Junn’s slightly seedy English romantic interest Alan (Peter Bowles) seem shoehorned in from a much broader and quietly comic movie, and they play awkwardly next to the quietly dramatic core of the material.

Nothing in the writing tells us why on earth Richard is doing all this for a woman who has dismissed and insulted him in the past, refusing to see what his relationship was with her son. What Richard wants most of all is to rescue Junn from the home and let her come live with him, and this is highly implausible for several reasons, not least of which is the fact that the home itself looks like such a comfortable and inviting place. It’s hard to believe such a place exists, and if it did, surely it would be out of the price range of all but the wealthiest people, yet we never learn how Kai was able to afford it; if Hong had wanted to create a rooting interest here, he might have made the home a more realistically harried and down-at-heel facility. It’s very hard to know why Richard, a young man, would want his dead lover’s disapproving mother to move in with him, but Whishaw brings such romantic intensity to the situation that he almost makes you believe it, in spite of the fact that Kai is depicted only as a cipher.

Whishaw is the most gifted and poetic actor in his age range, by a very wide margin, and everything he does here is fresh and unexpected. Though he works with such quickness of thought and reaction, with so many things happening in his face in such rapid succession, he never seems mannered or busy. Whishaw brings the same kind of immediacy to his playing on screen as he does to his work on stage, and he transfigures practically all of his dialogue here, making it sound purely felt; he sometimes plays one-hundred percent against the inadvertently silly words he has been given to say to get at deeper feelings. Aside from his extraordinary emotional expressiveness and his distinctively will-o’-the-wisp physicality there is a steady integrity to his playing, to what he finds interesting and true. His best scenes are with Christie’s Vann, where he gets to be more casual and funny and hint at a fuller life denied him by the script.

Watching Whishaw in “Lilting” is a little like watching Garbo in one of her lesser vehicles like “Romance” (1930) or “Inspiration” (1931). As with her, Margaret Sullavan, Gérard Philipe, River Phoenix and a few other very special and gallantly vulnerable players, just put the camera on Whishaw and that’s really all you need for a movie. He is one of the few working actors that you really should see in everything, and though “Lilting” doesn’t give him enough to play with, it does offer the pleasure of watching him in the full flower of his dogged, little-brother-ish, quicksilver inspiration. 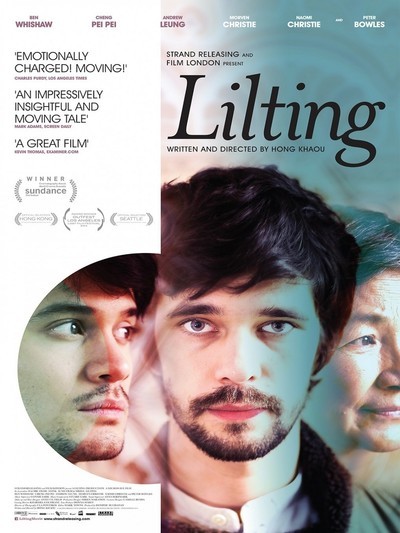