There’s no right way to grieve the death of a loved one. Some of us chose to keep the sadness to ourselves, others talk through it or express it in creative ways. We move on, or we don’t. We take comfort in the small signs that they might somehow still be with us or we lay their memory to rest in the back of our minds.

In Paul Harrill’s gentle drama “Light from Light,” a paranormal investigator and single mother named Sheila (Marin Ireland) is introduced to a widower, Richard (Jim Gaffigan), struggling with the recent death of his wife in a plane crash. He believes he can feel her presence but isn’t sure, and his questions have stumped his priest, Father Martin (David Cale), who in turn, invites Sheila to help. Together, they will try to find out if there is indeed a spirit in Richard’s home and hopefully, give him some sense of closure, whatever that may look like. Alongside the grown-ups’ heartaches are the troubles of young love between Sheila’s son Owen (Josh Wiggins) and his earnest girlfriend, Lucy (Atheena Frizzell).

This young love acts as a kind of narrative counterweight to the heaviness of what the adults are grappling with – a love that was cut short by death yet lingers on. They are each learning their way into this new emotional space through Harrill’s quiet direction. In many scenes, emotions sit in silence, written on the faces of the actors but left unspoken, like when Sheila is unsure of what to say to the grieving widower who’s turned to her for answers or when her son challenges her parenting. Originally, Owen is the one afraid to get hurt if he falls for Lucy. Then as he lets his guard down, his mom tries to intervene in an attempt to save her son from whatever possible heartbreak awaits. But some feelings just need to be felt, be they good, bad or confusing.

Harrill, who wrote and directed the film, isn’t as interested in the supernatural elements in the film as he is with the story’s few players. There’s a lot of room for emotions to breathe and wash over its characters, but never does it tip over into excess. It’s a muted portrait, quietly restrained in some ways that may feel restrictive but in others, remarkable in how far the actors can take these emotions without overacting. Ireland and Gaffigan give incredibly nuanced performances portraying characters who have more hurt behind their eyes than they let on. For Richard, it may be easy to see why he’s upset, but no amount of words could explain what he’s going through. In Sheila’s case, there are hints of a kind of an adrift, directionless frustration after the end of a relationship also meant she had to leave their shared paranormal group. In helping Richard find closure, Sheila might also close a chapter in her own life and move on.

“Light from Light” sticks to a subdued aesthetic throughout the characters’ emotional journey. When Sheila and Richard trek up the Smokey Mountains to the crash site where his wife died, cinematographer Greta Zozula finds her darkest shades of grey and forest green, swallowing the characters in a somber state of sadness. Yet, in a sunny moment not long after, there’s a warm glow of hope and healing unmistakable on both the actors’ faces and the scene itself. The melodic acoustic score from Adam Granduciel and Jon Natchez complements the movie’s gentle approach to grief and love like a comfortable sweater on a rainy autumn day, striking the right chords at just the right times.

Although it takes its time getting to where it’s going, “Light from Light” does eventually reach its destination. For a movie about grief, it’s surprisingly even-handed, not too melancholic, heavy or existential but mostly pensive. Those quiet scenes between actors allow the audience to fill in the unclaimed screentime with their own self-reflection. They’re also reminders of how unused we are to these silences and awkward it feels when we don’t have the right words to comfort someone. Then again, most of us never do enough listening to one another, awkward silences included, which makes “Light from Light” a tender lesson in listening to and observing one another. 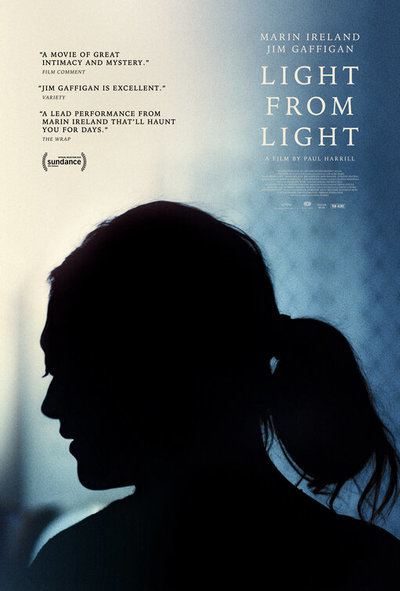