In photographs taken close to the time Alain Resnais was to present his “Life of Riley” (its French title is “Aimer, boire, et chante,” that is, “Love, Drink, and Sing,” but the English title matches that of its source, a work by British playwright Alan Ayckbourn) at the 2014 Berlin International Film Festival last February, the venerated director hardly looked like a man who’d made his final movie. But Resnais went on to his final reward in June, which casts a retrospective shadow on the movie and places it in a context we can’t be sure he intended. For “Life of Riley” is about a man who is dying, a man who’s never seen on screen. Set, as Ayckburn’s play is, in the countryside of England, and enacted by characters who read British newspapers and drive in cars with right-hand-side steering wheels nevertheless speaking in French, “Life of Riley” features six characters not in search of an auteur but preoccupied with the impending death of an old pal, the title character.

Riley’s an old pal, more precisely, to two of the males in the cast, but something more to three of the females. Kathryn (Sabine Azema, Resnais’ real-life partner), the formidable, voluble wife of physician Colin (Hippolyte Girardot) is a former girlfriend who’d like to renew her closeness with Riley. Tamara (Caroline Sihol), cast as a romantic interest opposite Riley in an amateur theatrical production (the play-within-a-play ia also an Ayckbourn work, in a typically meta touch), wants to take that relationship into the real world, in part to spite her philandering husband Jack (Michel Vuillermoz). Riley’s youngish ex-wife Monica (Sandrine Kiberlain) is seen as torn between her compassion (Riley’s been given a sudden fatal diagnosis) and her domestic bliss with a sternly jealous new husband (André Dussolier). It’s worth noting that the disparity between the characters and the actors playing them, age-wise is frequently pretty great, but that’s just one aspect of the movie’ artifice, which is not unrelated to its origin as a theater work, and/or the fact of that aforementioned play-within-a-play.

Everything in “Life of Riley,” Resnais makes plain, is a contrivance. Much of the joy and beauty of the movie comes from letting the levels of contrivance fall into place, as with some Rube Goldberg contraption, creating a parallel abstract narrative to the more conventional semi-farcical one unfolding on screen. In the latter, the comedic tension mounts as Kathryn’s character becomes more manic and bossy (Azema’s performance is an energetic tour-de-force), and the forces imposing themselves on Riley’s simultaneously dwindling and blossoming existence (he’s apparently the hit of the play, and undiminished in energy at a teen’s birthday party near the movie’s finale) loom over him even as the unseen character plots a switcheroo that will leave all of the on-screen characters at least slightly aghast. As all this is going on, Resnais constructs a formal game that incorporates transitional location shots, hand-drawn cross-hatched pen-and-ink backdrops for close-ups (shades of his ‘90s comic-strip movie, the daring but less successful 1989 “I Want To Go Home”) and clear stage-style sets for the action proper. At certain critical points near the end he cuts in shots of an animatronic mole or gopher snickering, in a homage to…can it be…”Caddyshack?” Maybe. I kind of think so.

So there’s no shortage of stimulating and maybe even confounding formal playfulness here. And it’s not there to leaven the subject matter; it’s integrally folded in, to suggest that matters of both life and death are best approached with a light touch. It’s an encouraging perspective from a filmmaker whose work has never lacked for seriousness (his first feature film was “Hiroshima Mon Amour”) and whose late-career cosmic games are distinguished by a joy that’s never glib (see “Wild Grass”). Still, for all of this, “Life of Riley” doesn’t play like a deliberate or self-conscious “last” film, its suitably elegiac final images notwithstanding. It doesn’t rage against the dying of the light because its creator’s imaginative light is burning bright throughout. The near-featherweight insouciance is part of the magic of “Life of Riley:” its sub-theme could be the bearable (and perhaps necessary) lightness of aging gracefully. What a way to go. If you have to go, and we all do. 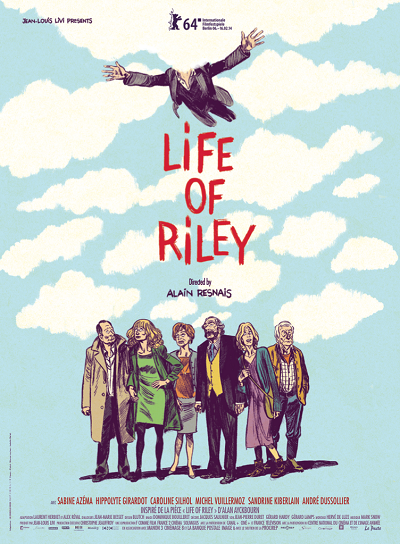