Even in the repressive Leningrad of 1980s Soviet Union, rock could not be stopped. Perhaps it was their authoritarian antagonists that spurred on fans on to survive in spite of austerity, to create under threat of censorship and turn to illicit Western music from the United States or Britain for their own musical education. Their fellow countrymen would scorn them, officials would hate them even more, but still, they rocked on and created a sound of their own.

One of the leading voices in that movement was Viktor Tsoi, the frontman of the band Kino in the USSR before his untimely death at 28 in 1990. Just like his American counterparts who have died tragically young, Tsoi became even more popular in death, making him a prime candidate for a biopic someday. However, a straightforward big screen biography is not what director Kirill Serebrennikov delivers in “Leto.”

Tsoi (Teo Yoo in the movie) is an aspiring musician like many others in Leningrad. He and a friend seek out the leader of another band, Mayk Naumenko or Mike (Roma Zver) for short, for his advice. Mike gives out his words of wisdom freely once he spots that Viktor has something special in his music and poetic lyrics. Mike also notices the wandering eye of his wife, Natalia Naumenko (Irina Starshenbaum), who goes by Natasha. She connects quickly and effortlessly with the new kid in their entourage just as Mike is losing his handle on drinking.

What many of us would consider to be a biopic – a dramatic retelling of a famous person’s life – doesn’t neatly apply here. Yes, the characters are modeled after real people, maybe even a few real situations, but there’s also the necessary disclaimer at the end: “Any resemblance of fictional characters to real people is purely coincidental.” Throughout the movie, a character breaks the Fourth Wall to tell the audience many times that what we are seeing is not true. “This never happened.” “This did not happen. Nor will it.”

If that wasn’t strange enough, “Leto” includes other surrealistic flourishes like scrappy hand-drawn-style animation to visualize lyrics and having everyday civilians occasionally break out into song. At other times, the movie switches into what looks like Super8 footage of the bands goofing off in the woods or backstage, which changes the aspect ratio of the screen and allows for bursts of color to shine through the mostly black-and-white movie. None of these creative tangents are consistently used. They’re sprinkled throughout and sometimes feel cacophonous, the effects can feel alienating but they certainly don’t look boring. Vladislav Opelyants’ crisp black-and-white cinematography manages to look elegant yet often grungy in the Naumenkos’ dingy apartment and performance hall where officials force attendees to stay seated throughout the rock show.

“Leto” writers Mikhail Idov, Lili Idova and Ivan Kapitonov take plenty of creative liberties to warrant the “Any resemblance of fictional characters” disclaimer. Serebrennikov, who also shares a co-writing credit, seems to be a fan of the two bands’ music and filled his movie with Tsoi and Naumenko’s songs as well as covers of Talking Heads and Iggy Pop staples. However, at an over two-hours runtime, if these bands aren’t your jam, you’re in for a bit of a slog.

Even the slow-motion crumbling of the love triangle between the mentor, his wife and his mentee isn’t that thrilling. “Leto” had the potential to be so much more lively—this is rock ‘n’ roll in the Soviet Union we’re talking about—that its stylish malaise feels much more disappointing. 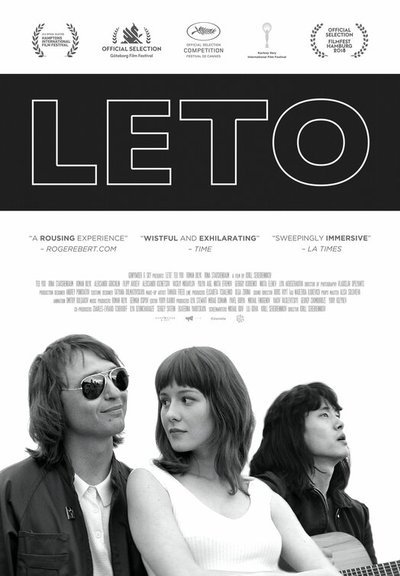