Leaning into the Wind: Andy Goldsworthy

In his glowing 2003 review of “Rivers and Tides: Andy Goldsworthy Working with Time,” Roger Ebert tells of how he kept receiving emails from his readers urging him to see the documentary. Initially released in the U.S. in 2002, the film built into a word-of-mouth phenomenon after earning a long run in San Francisco at various theaters. Goldsworthy, its subject, is a self-described land artist so enraptured by nature that he doesn’t just want to be one with it. He sets about turning the great outdoors into his own studio space. He respectfully manipulates such found materials as stones, branches, fallen trees, leaves, clay, rocks, vines and even icicles in ways that still honor their origins. Some works such as tree trunks whose thick branches curve and grasp like human fingers after being mounted on a ceiling are meant to endure. Yet many are intentionally ephemeral, destined to briefly exist before dissolving back into the backdrop of flora and fauna from whence they came.

Roger was duly transfixed while observing the Scotland-based environmentalist’s immersive process, declaring that, “Watching this movie is like daydreaming.” Alas, much like Roger nearly 15 years ago, I have only just discovered the existence of “Rivers and Tides,” thanks to the arrival of its sequel,  “Leaning into the Wind: Andy Goldsworthy.” This time, Thomas Riedelsheimer—a German director, photographer, cameraman and editor who captures images worthy of National Geographic that are heightened by a sculptor’s sense of space and proportion—concentrates on showing how his now-61-year-old subject has evolved since they last collaborated. Once again, the percussively primordial jazz soundtrack that intensifies the sense of wonder and discovery onscreen is composed and performed by Fred Frith. But there is something new, too, in the form of Goldsworthy’s dad-indulging daughter, Holly, and Riedelsheimer’s son, Felix, who both act as assistants to their mutual fathers.

While standing among the verdant rolling pastures of his home base of Dumfriesshire, Goldsworthy ponders the way his concerns over what and how he produces his art has changed over the years. “I think when I was younger, it was ‘this is how I do this, there’s a kind of procedure.’ But nature is everywhere. Why even mention it?” But, ultimately, his goal hasn’t changed. “I’m still just trying to make sense of the world.” While he can speak passionately about the violence suffered by towering trees felled by Dutch elm disease, words aren’t exactly Goldsworthy’s strong suit. Instead, his eloquence can be found in his interactions that require touch and sight, as he almost goes into a trance until inspiration strikes.

Over the course of the film, storyteller and subject head to areas both pastoral and urban around the globe in a hodge-podge manner. But this is no traditional travelogue since Goldsworthy’s primary purpose for going to San Francisco or Gabon in Africa is not to sight-see but to forage far and wide for organic matter that he can repurpose. That sometimes means recruiting a tree service team to employ buzz saws to carve a pineapple-rind-like texture on a disembodied section of a tree. Or simply gathering batches of bright yellow leaves found near a forest stream that lend an instant pop when patiently pasted like caution tape along public stairways or on stones that border river banks. Goldsworthy is so fond of the golden leaves, he at one point fills his mouth with a wad of them and spits them into the air like confetti.

In fact, my favorite moments are whenever Goldsworthy inserts his own body into the process to add a human touch. It can be something as simple as a ray of sun shooting through a hole in a roof atop a Brazilian shack. He flutters his hands through it and tosses dust at the shaft of light, injecting energy and movement into a natural occurrence and then elevating it. Or it can be a row of prickly barren hedges that he slowly crawls atop of on all fours in silhouette. But his neatest trick is when he lies down on a city sidewalk in public, a slab of stone or a coffin-like basin while allowing raindrops to leave behind an eerie silhouette of his body before the falling water swiftly fills it in.

It began to dawn on me that without these spontaneous outbursts of art being captured on film and in photos, the world would never be able to experience their magic. I, for one, am glad that we can witness Goldsworthy climb a pine tree, rigorously shake it and release a massive mushroom cloud of pollen. And, if you are thinking that leaning into the wind is just a metaphor, then think again. Roger was definitely onto something with his daydreaming analogy. This is one of the most relaxing experiences I have had watching a movie in a long time. 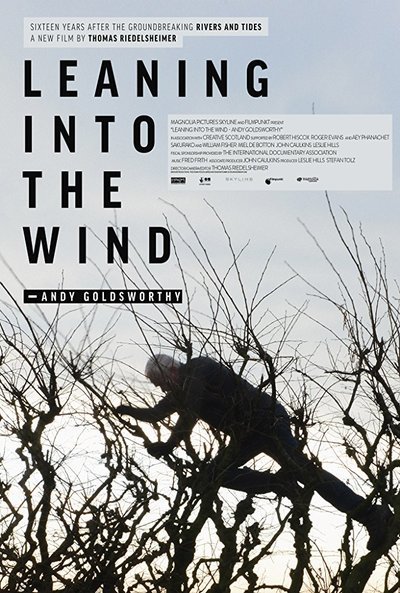 Leaning into the Wind: Andy Goldsworthy (2018)