Leadbelly is known to everyone who knows American folk music. He wrote "The Midnight Special," "Rock Island Line," "Take this Hammer" and hundreds of other songs, and had an enduring, influence on our music. Near the end of his life, he was cheered in Carnegie Hall. Huddie Ledbetter is less well known. He killed at least two men, he spent long stretches of time on Texas chain gangs, he rode the rails and one of his first jobs was playing the guitar in a whorehouse. The remarkable achievement of Gordon Parks' "Leadbelly" is to give us both these men and to show us how one became the other.

The movie is one of the best biographies of a musician I've ever seen, and one of the most direct. It doesn't fool around with the bargain basement Freudianism of most musical biographies, and Leadbelly's music is seen as rising naturally out of his life and experiences. The movie doesn't go in for shallow explanations and motivations. Instead, it follows its hero (played with great strength by Roger E. Mosley) down long roads and through long years and allows the music to speak for itself.

"Leadbelly" is a companion piece, in a way, to Gordon Parks' "The Learning, Tree" (1968), the story of his own youth in Kansas. He remembered himself as a serious, introspective boy who suffered from discrimination but who never seriously doubted his ability to prevail, to learn and succeed. He did, of course; he was one of the most famous photographers at Life magazine before becoming the first black to direct a major studio feature. And now he gives us the life of a very different young black, growing up a few decades before he did, and not quite so in control of his emotions and his temper.

We meet a Huddie Ledbetter, who plays guitar well enough to bet a $10 gold piece that he's the best player in town. But he doesn't seem to see around his music; he doesn't see it as an avenue out of Texas, poverty and discrimination, but as something he just naturally does from day to day. He plays in bars, in the streets, in brothels. He meets people along the road. He runs into Blind Lemon Jefferson on a train, and they buy a car together and argue about who'll drive it. "You're drunk," Jefferson tells Leadbelly. "Yeah, but you're blind," Leadbelly says. He drives. Parks takes him through the South in a series of magnificently photographed scenes. We see rural black life in a way that's unstressed, unsentimentalized and real.

Leadbelly finds that he has a gift for catching the eye of pretty girls along the way, but he can't stay in one place long enough to settle down, and he doesn't find it easy to reveal himself to women. He picks some cotton, he and Blind Lemon perform at dances for white folks, he gets sent to a work gang for the first time for fighting with a white man who insults him. That was a bad rap, but he does commit the two murders he's later sent up for. The first murder was more or less unintended, and the second was in self-defense, but his crimes are matched by the crime of the chain-gang system, designed to break his spirit. It fails.

He fights back, he keeps his pride and the movie's most moving scene comes when he deliberately pretends to be just a simple-hearted darkie in order to get a pardon from the governor (John Henry Faulk). Parks handles the scene, and the whole movie, with an attention to visual detail that tells us all we need to know. And the many Leadbelly songs aren't excuses to stop the movie; they're comments on the narrative, and grow out of it as organically as they seem to grow from Leadbelly's life. 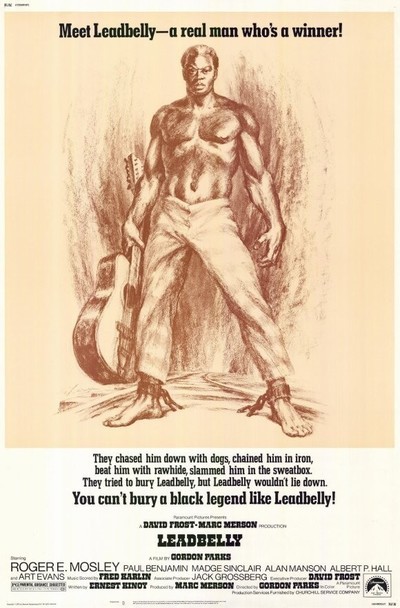