"Last Weekend" is a film that asks audiences to spend a long Labor Day weekend in the company of a supremely dysfunctional family given to trading barbs with each other at the drop of a hat and the unfortunate collection of guests and acquaintances that they have invited along to bear witness to the misery. Since this is something that most people can get for free on their own, what could possibly induce them into forking over the price of a ticket to experience vicariously? Alas, the movie never gets around to answering that question, or any others of note, and as a result, anyone who does bother to show up will find themselves bearing witness to unpleasant people doing and saying unpleasant things to each other while hoping in vain that the two guys from "Funny Games" will show up hoping to borrow a couple of eggs.

As the film opens, Celia Green (Patricia Clarkson) and her husband, fitness center magnate Malcolm (Chris Mulkey), are at their opulent Lake Tahoe vacation home awaiting the arrival of their two sons to see out the end of summer. First to arrive is older son Theo (Zachary Booth), a television writer with cinematic ambitions who comes with an entourage that includes his boss (Rutina Wesley), who he has given his screenplay to read, her husband (Fran Kranz), the star of his show (Jayma Mays) and, seemingly almost as an afterthought, his new boyfriend Luke (Devon Graye). Following close behind is younger brother Roger (Joseph Cross), who arrives with a big secret—he has just been fired from his financial firm after losing them $30 million because of a simple typo—and girlfriend Vanessa (Alexia Rasmussen), who yearns to place her boutique flavored waters in Malcolm's gyms and despairs of ever landing in the good graces of the exacting Celia.

Right from the get-go, the weekend is pretty much a disaster. For starters, Celia and Malcolm are considering selling the home—one of their two vacation homes—but do not know how to break it to the kids. Both sons have hardly arrived before snapping at Celia, though she is quick to be dismissive of practically anyone with the misfortune to get into her eye-line. Luke has a serious allergic reaction at their first dinner together and Celia does not distinguish herself when she asks whether using the EpiPen is absolutely necessary because of the cost—this coming from someone who apparently refuses to buy anything that does not include some form of ecologically-minded surcharge. The next day, the Green's loyal caretaker (Julio Oscar Mechoso) is electrocuted and rushed off to the hospital with his cook wife (Julie Carmen). Add in the usual squabbles, misunderstandings and revelations and most people will find themselves thinking that by comparison, Fredo Corleone got off relatively easy during his last visit to Tahoe.

"Last Weekend" is such a stridently unpleasant experience that it almost feels at times as though screenwriter Tom Dolby (no relation to the singer who once illustrated the pleasures and perils of being blinded by science) has actually written an extremely poker-faced satire of that cinematic subgenre featuring well-to-do dysfunctional families ripping into each other over the holidays before finally Coming to Terms with Things. If nothing else, this would explain some of the more obnoxious and clueless moves by the characters, such as the aforementioned EpiPen incident or the moment when they sneer at their neighbors for being nouveau riche clowns because they made their fortune in air conditioning instead of something more hallowed and traditional like fitness center franchising. As it turns out, it seems that not only does Dolby intend the material to be taken relatively seriously—yes, even the scene where Celia has a cathartic breakthrough when she washes some dirty dishes all by herself—but he wants us to somehow empathize with the characters and their elevated sense of ennui. The problem is that while he can illustrate hateful self-absorption handily enough on the surface, he betrays no idea or interest as to what makes such people tick, and, as a result, scene after scene just collapses under the weight of its own unpleasantness.

While the screenplay may be lacking in anything resembling insight, it is certainly top-heavy in regards to characters—besides all those already mentioned, there are also a trio of neighbors played by Judith Light, Mary Kay Place and Sheila Kelley who pop up whenever some exposition needs to be clumsily deployed—and subplots, almost all of which are introduced and then largely left unresolved. The large cast of actors are good at playing singularly obnoxious and self-centered characters, but mostly clueless when it comes to making them into people worth taking even the slightest interest in. As for co-directors Dolby and Tom Williams, they go about their jobs in the most indistinct manner possible—there is not one interesting cinematic moment to be had here and they somehow even manage to contrive to make a Tahoe sunset come across as nothing particularly impressive.

Seemingly made for film festivals that you have never heard of and cable stations you don't recall ordering, "Last Weekend" has exactly two assets that rescue it from complete uselessness. One is the presence of the usually wonderful Patricia Clarkson in a rare lead role as Celia. While she cannot quite save it, she has a couple of scenes where she comes very close to busting through Dolby's triteness in order to make her character into a recognizable human being. The other is the vacation house itself, an architectural marvel that is more expressive than most of the dialogue. If it looks familiar, it may be because, as I have learned, the house was previously featured prominently in the film version of "A Place in the Sun." While it is nice to see a veteran making a long-awaited return to the big screen, here is hoping that next time around, the house holds out for a better script. 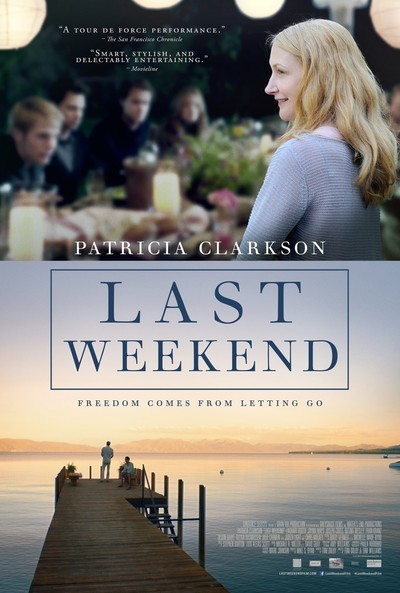