This is it - located at last and with only six weeks to spare - the worst film of 1988.

"Last Rites" qualifies because it passes both acid tests: It is not only bad filmmaking, but it is offensive as well - offensive to my intelligence. Many films are bad. Only a few declare themselves the work of people deficient in taste, judgment, reason, tact, morality and common sense. Was there no one connected with this project who read the screenplay, considered the story, evaluated the proposed film and vomited?

The movie begins with the following premise: Handsome young Father Michael Pace (Tom Berenger) is an assistant priest at St. Patrick's Cathedral in New York. His father, Carlo Pace (Dane Clark), is the godfather of the New York Mafia. The movie opens with Michael's sister, Zena (Anne Twomey) catching her husband with his mistress and shooting him. She's a pretty good shot. The first shot castrates him, the second one kills him. Then she goes to Father Michael to confess her sin.

The sacrament of confession is handled throughout this movie as a cheap gimmick, without the slightest evidence that any of the characters or filmmakers understand how it works. But never mind. I mention that the sister goes to her brother to make a confession because the movie is inept at storytelling. Unless you are very clever or perhaps psychic, you will actually not catch on until late in the movie that Father Michael is even related to Don Carlo or to Zena. The movie isn't keeping it a secret; it's simply so slipshod that this crucial information is not clearly supplied.

The husband's mistress is named Angela (Daphne Zuniga). After she escapes from the bloodbath of revenge, she finds herself sheltered and comforted by none other than Father Michael, who believes her story that she is a simple Mexican girl who got into some very deep water.

Zuniga's Mexican accent is so unbelievably bad it wouldn't even qualify for a Taco Bell ad. No one could possibly believe she is really a Mexican - except perhaps in this movie, which is so witless that you're inclined to give the accent the benefit of the doubt. (The linguistic depths of the movie are murky indeed; Don Carlo pronounces his name, Pace, to sound like "pa-chay," but young Michael makes it rhyme with "race." Thus, of course, at a crucial moment a character does not realize they are related.)

Michael and Angela fall in love, after Michael moves her into his bachelor quarters inside St. Patrick's Cathedral. You might ask how a priest could live with a woman inside a cathedral without being noticed, but the cathedral seems to be severely understaffed, and the only other priest in view is genial old Father Freddie (Paul Dooley), who stutters a lot and waxes philosophical. In order to handle the tricky challenge of a love scene between the priest and the young woman, the writer-director, Donald P. Bellisario, gives us an extended erotic sequence and then reveals it was only a dream. Of course, after the "dream," both characters subsequently change in their behavior toward each other as if they had really made love, the movie being so dishonest that it eats its cake and has it, too.

There are "secrets" in this movie that will gnaw at your credibility, "revelations" that are either (a) not surprises, or (b) completely implausible. The plot is a feverish scavenger hunt through lurid melodrama, impossible coincidence, shocking exploitation of the religious material, utter disregard for the audience and a cheerful contempt for the talented actors - who have the right, I think, not to be made fools of.

Although Bellisario makes pious bleats in his press releases about the moral crisis faced by his hero in the movie, let's face it: This movie was made in order to give us a love affair between a priest and a sexy woman. The other stuff - making the Mafia look noble, putting in lots of bloody special effects - are bonuses.

Ask yourself this simple question: Would "Last Rites" have been financed if the priest had resisted all temptations and remained chaste until the end? Are there stars in the sky? Does a bear shine his shoes in the woods? 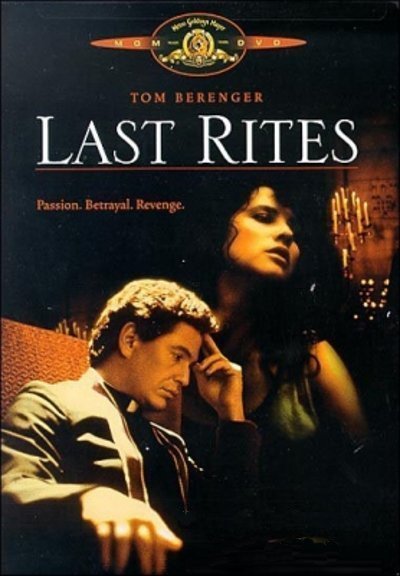