Eloise “Ellie” Turner (Thomasin McKenzie), the wide-eyed protagonist at the heart of director Edgar Wright’s stylish yet thematically inert horror/comedy "Last Night in Soho," has big dreams of becoming a fashion designer. But a ghost haunts her: Ellie’s mother had similar desires of working as a designer. Her mother moved to London only to die by suicide. Now Ellie sees her visage in every mirror.

Likewise to her mother, Ellie, who worships the styles and music of the 1960s, decides to relocate to London for fashion school. But her doting grandmother (a touching Rita Tushingham) fears for her: she can see and feel emotions others cannot, a kind of strong psychic link to her environment. After receiving a lukewarm reception from her college mates—they tease the creative Ellie for wearing the clothes that she made, and for her humble country origins in Cornwall—she decides to move out on her own. She rents a vintage flat from a strict but seemingly caring Ms. Collins (Diana Rigg, in her final film role).

It’s a wonderful set-up for Ellie until she begins to dream of being Sandy (Anya Taylor-Joy), a swinging, young blond woman who lived in 1966 London. Soon the bounds between reality and fantasy blur, and Ellie’s dreams become nightmares. Co-written with Krysty Wilson-Cairns (“1917”), Wright’s “Last Night in Soho” is funny and chaotic, slick and stylish, and falls apart in its confounding second half.

The first section of “Last Night in Soho” sings by way of Wright’s penchant for sharp needle drops: songs like Petula Clark’s “Downtown,” James Ray’s “Got My Mind Set on You,” and Peter and Gordon’s “A World Without Love” toe tap Ellie’s adventures through London. The young woman is kind of a hayseed, dazzled by what she’s read about the big city, and searching for the London she’s heard in her favorite songs. How McKenzie plays Ellie is not unlike her turn as Tom in “Leave No Trace.” She’s a stranger caught in a strange land, trying to mend her disconnection from a parent. She uses her nostalgia for the '60s as a safety net, eventually buying clothes from the era and changing her hair blonde.

The initial premise for “Last Night in Soho” also hits. As the country girl now living in the big city, she must avoid lascivious elements. During a skin-crawling cab ride, for instance, the driver begins to comment on her legs, and wants to know if other models live with her. Wright wants to make this film not just as warning against blind nostalgia, but a critique of grubby, toxic men.

This central hook hints at the latter theme, that when Ellie sleeps she not only sees Sandy, Ellie becomes Sandy. Resourceful in-camera effects and staging allow the elegant Sandy to enter a hip, fabulous 1960s club, descending down a flight of stairs, past a wall made of mirrors. On one side of the mirrors is Sandy. On the other, Ellie. The two characters, however, are polar opposites. Unlike the shy Ellie, Sandy struts with the confidence of a runway model. She knows what she wants. And she thinks she knows how to get it.

Where Wright’s film begins to falter is with its villain. See, Sandy comes under the watchful eye of Jack (Matt Smith), a pompadoured, pinstripe-wearing agent who represents all the girls. Unbeknownst to Sandy, Jack is a pimp. And he uses her hunger for fame against her by promising the ways that propositioning herself will help her career. While Ellie comes to fear him, the audience doesn’t. It’s inaccurate to say the concept of Jack wouldn’t make a hateable villain. But Wright doesn’t build-out that character enough for him to be more than a boogeyman.

Wright made his mark with the zombie comedy “Shaun of the Dead,” so it’s not surprising that he’d return to the tactic here. Amid colorful, surreal kaleidoscopic reflections, a gaggle of morbid apparitions appear to attack Ellie. These ghosts elicit few frights due to their indistinguishability, and how often Wright deploys them. The ever-shrinking boundaries between Ellie and Sandy might be intriguing if the two were more connected beyond having the same address in different decades.

“Last Night in Soho” also suffers from a common mistake that arises from colorblind casting. To elicit a scare in one scene, unintentionally the scariest in the film, the film’s lone Black character (Michael Ajao) is dressed for Halloween only to have his night end in a near-rape accusation by a white woman. It’s difficult to further discuss the scene without major spoilers, but filmmakers need to understand that merely casting a Black actor isn’t enough, especially with the racial history of a scene like this one. Afterwards, that Black character still tries to help the white person who nearly got him killed, a decision that’s more far-fetched than any ghoul.

Beyond the initial themes, such as zealotry to the past and toxic men—there’s just not enough to carry the film. Wright doesn’t have anything to say about the sex industry, the casting couch or mental health beyond a surface-level understanding. Instead, he relies on cornball humor, copious blood and gore, and homages to far better films. Normally that’d be enough, and it has been in the past, but the tonality doesn’t quite square with the film’s heavy subjects this time. In fact, the twist ending won’t surprise many.

Ultimately, Ellie’s story feels incomplete, buried by the fashion of the film until the style can no longer carry it. Wright's “Last Night in Soho” features a killer soundtrack and chic retro fashion by costume designer Odile Dicks-Mireaux, yet crumbles into a disappointing mound of boredom.

This review was filed on September 11, 2021 from the North American premiere at the Toronto International Film Festival. The film opens on October 29, 2021. 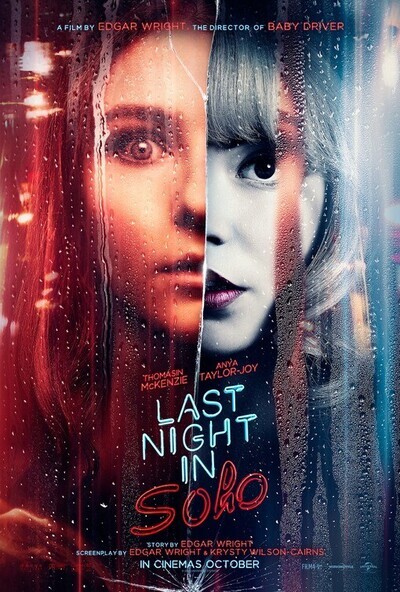