I am certain that brothers Justin Long and Christian Long had a lot more fun writing "Lady of the Manor" and probably a lot more fun directing it than anyone will have watching it. The screenplay is painfully incompetent, the comedy is puerile, and the direction limps along like a set of disconnected skits, with no sense of pacing or rhythm. It is genuinely painful to see some of the most talented and appealing actors in Hollywood, including Justin Long himself, wasted in a movie that shows such a lack of respect for the audience.

The premise is promising: a weed-smoking slacker gets a job as a costumed tour guide in a historic Savannah mansion and learns something about decorum, history, and responsibility from the ghost of the home's 19th century resident. Having recently re-watched the delightful original version of "The Canterville Ghost," I was prepared for something smart, funny, and possibly heart-warming. Instead, "Lady of the Manor" kills any entertainment value in the movie with three critical failures. First, the film assumes that its characters are much more appealing than they really are, and much of the storyline is based on the idea that the audience will be committed to their success. Second, the screenplay assumes that sex offender registries, secondary sexual characteristics, and scatological distress are inherently funny, not realizing that for anyone over the age of 10, an actual joke is required. In fairness, there is one actual joke in this category, and it is about naming an impressively varied and extensive collection of vibrators after 1980s figures like Judd Nelson and Tom Selleck. The Selleck one has a little moustache! Ha! Third, unforgivably, the movie has a condescending white savior theme, while the characters of color exist only to be saintly and/or be farted at. Oh, and the script includes the r-word, too!

Meanwhile, a spoiled rich guy named Tanner Wadsworth (Ryan Phillippe, nearly unrecognizable) who will someday inherit the historic mansion, sees Hannah at a bar and impulsively offers her a job as the live-in tour guide of the house, apparently because he thinks that a 21st century version of droit du seigneur means that he will also get to sleep with her. Yes, this makes no sense, but that's where we are with this film. Hannah is fine with this idea because he is "hot." A scene where they are about to go to bed together and she changes her mind is particularly excruciating. But it's not as bad as when Hannah has to sneak back into the mansion after she is fired and decides the best way to do it is to dress up as a Hassidic rabbi.

Then there's the ghost, Lady Wadsworth (Judy Greer). Yes, this is America and we don't have titled nobility, but this is a film that expects us to find it adorably funny that a woman has no knowledge of history but somehow does not notice its own lapses in the screenplay. Justin Long plays a history professor named Max (leading to name jokes Maxi-pad and Professor Plum, ha ha) who with even less believability falls for Hannah even though she constantly takes advantage of him and every time she sees him with a student, she assumes they're sleeping together.

Hannah and the ghost get to be pals, Hannah introducing Lady W to the wonders of the internet and Lady W chiding Hannah about the appropriate way to "expel any naughtiness from your nether regions." At one point, Hannah makes a joke about the similarity of the words "rabbis" and "rabies." Lady W responds, "I got it. I just didn't find it to be humorous." Ditto. 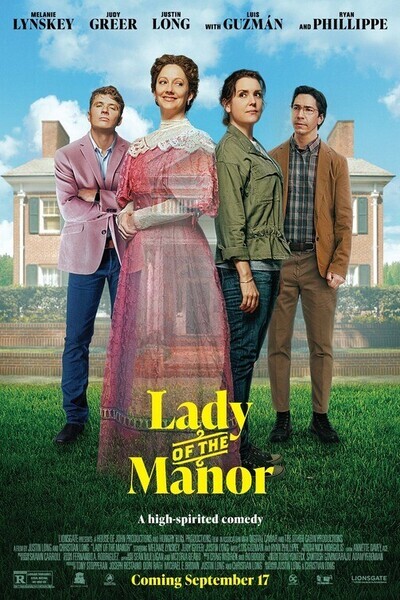 Rated R for language throughout, sexual material and drug use.