Actor Joe Manganiello ("True Blood," "Magic Mike,") had originally conceived of "La Bare" as a reality TV series detailing the backstage life of the male dancers at La Bare in Dallas, known as "the most popular male strip club in the world." Manganiello's research for playing his role in "Magic Mike" had pierced through his preconceived notions of what male strippers were like, and he was curious to learn more. "La Bare" shows its reality-TV origin in its structure, to sometimes a clichéd degree, but overall it is a friendly and affectionate backstage look at the world of the mostly-straight male dancers at La Bare.

There are "confessionals" with the various dancers, all of whom have different strengths (one says, "I can't dance at all. But I can f***. So I use that in my act."), there are glimpses of the shows themselves, the screaming women, there are interviews with fans. Some of the really interesting elements are merely sketched in, like how La Bare, which has been around since the '70s, turned itself around from a kind of skeevy dive into the showstopping club it is today. A new owner came along, a Russian named Alex, who is interviewed wearing a T-shirt with "CCCP" across the front. He wanted to create a strip club that was run like a business; he wanted to hire dancers who thought like businessmen and weren't drug addicts or troublemakers; he wanted to build a brand. And he did. Alex would be compelling enough for an entire documentary.

The dancers come from all walks of life. One talks about how he was homeschooled and not allowed to listen to secular music, which meant he had no idea how to dance "to the beat" in his early time as a dancer. One had owned a restaurant, which he then lost, and uses dancing as a way to make money to open up another restaurant. One, with a blue mohawk and multiple piercings, talks about his time in Afghanistan and Iraq as a Ranger.

Overseeing the dancers at La Bare is a larger-than-life personality named Randy (aka "The Master Blaster"), who has been a dancer for 34 straight years (he's in the Guinness Book of World Records). He jokes that he has now performed for five generations of women. Randy has no children of his own and sees the dancers as his sons. He "raises them," reminding them of the Golden Rule, for example. He puts them on diets, he helps them with workout plans. Randy is unable to speak without making a motivational speech. He has a devoted fan base.

To counteract the idea that stripping is somehow a depressing job, and the idea that male strippers are even more "beyond the pale" than females, "La Bare" highlights the positive to destabilize those expectations. We are accustomed to female strippers being presented as victims, a simplistic attitude, and certainly not true for all of them. "La Bare" shows the dancers as a tight group of friends, highlighted by the fact that just prior to filming, one of the dancers, the beloved "Angelo" (Ruben Riguero), was killed after a scuffle at a local club for apparently no reason. But other than that, the "horror stories" one may expect do not materialize. These guys are more like body builders, concerned about salt intake and limiting alcohol consumption. They also try not to sleep with clientele. It's just bad business.

Each guy is extremely open to the camera, a tribute to Manganiello's questioning and attitude. One can imagine the suspicion with which the project may have been treated initially. The dancers are sensitive about being misrepresented. The openness of the interviews is captivating.

The difference between strip clubs catering to men and those catering to women is discussed in the film, by both the owners of the club, as well as the dancers and the women who flock to La Bare. La Bare invests a lot of money in the shows, and each guy has a particular "act", some of them elaborate to an almost Cirque de Soleil degree. The guys do calendars and private parties and promotions and it's all about creating a brand for themselves. A female stripper says about all of this, "For these guys, it is their whole lives." For her, not so much.

So what is different about a strip club catering to women as opposed to men? One of the La Bare regulars observes that "men are like a microwave, and women are like an oven … we need that pre-heat time." Throughout the film the dancers as well as the owners of the club echo that thought. For the women who come to La Bare, they want the romance and the fantasy of the show itself, they want to be drawn in and swept away. To the dancers, female fantasy is the air they breathe: they don't treat it with condescension or contempt, they cater to it directly. It's strangely refreshing in today's climate where there are worried think-pieces about what 50 Shades of Grey means and what should we DO about it?

"La Bare" takes its time to profile some of the side figures, like Pablo the backstage hand, or the guy who DJs for the club. These sections feel like filler. They sag and lag. It is the dancers who fascinate, and in its own stealthy way, "La Bare" opens up a little bit of breathing space around the idea of masculinity, how it operates, and what it actually looks like.

There are definitely depths to be plumbed in the conversation about objectification and sexuality, particularly in the realm of men. "La Bare" approaches the issue indirectly, and yet in a way, it's the whole point. Men who put their sexuality out there like that are often seen as "feminized", and that word is used an insult (disturbing because it assumes that being "feminine" is a negative). These guys don't worry about any of that. They are there as fantasy figures and they work hard to provide that fantasy. One of the dancers reports that he asked a woman why she likes coming to La Bare so often. She replied, "When I come here, I feel pretty." That's a pretty strong statement about what these shows provide. 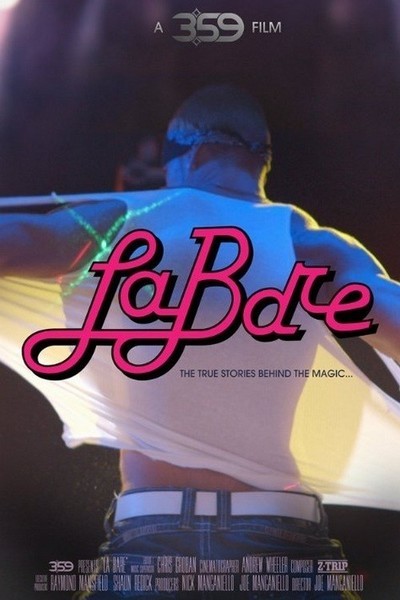 Rated R for sexual content and language throughout, and brief graphic nudity