Frida Kempff’s “Knocking” is the disturbing kind of slow burn mystery that makes a viewer question everything they see or hear. We are shown hints of what’s happened, but not everything is explained. Things that felt safe or insignificant in the movie soon warp into danger signs. Things or people that look suspicious turn out to have perfectly reasonable explanations. It’s a horror movie with no jump scares or monsters, while uncertainty reigns supreme and sustains the tensions to the credits. Kempff immerses her audience into her character’s tortured headspace, like a tragic hall of mirrors that seems endless.

Molly (Cecilia Milocco) lives in a psychiatric ward after surviving a traumatic breakdown. Feeling like she’s reached a point of recovery, she asks her doctor to return to the outside world. Blinkingly, she steps out into the busy streets and packed trains of Sweden. She reestablishes her home in a new apartment and tries to remember her daily habits away from the scheduled and supervised life at the ward. She meets her live-in super, Peter (Krister Kern), and a stern-faced neighbor, Kaj (Ville Virtanen), just upstairs. More new faces will follow soon. Then—as the title suggests—there’s an incessant knocking sound. Molly goes door-to-door to find the source of the noise, which has now grown to include sobbing and crying. Is the heat getting to Molly or is she the only one who hears the cries of a woman in danger? As her neighbors turn into suspects, Molly searches for answers—even as no one believes her.

Kempff and screenwriter Emma Broström, who adapted the script from Johan Theorin’s novel, do an impeccable job of creating Molly’s perspective—both what she’s been through and what she’s now enduring. The audience is left almost as disoriented as Molly, in as much disbelief as her and just as curious and (and if you have an aversion to repeated sounds) desperate to make the knocking stop. Milocco’s performance is equally as measured and believable. She balances the shaky confidence of a person who wants to move on with their lives but has been through so much that they’re not entirely sure they can. And yet Molly finds reserves of bold action, like fighting with her neighbors and going to get outside help, because she’s convinced someone’s in danger and needs help. Although her actions seem cold and off-putting to her neighbors around her, the movie empathizes with her well-meaning crusade. When Molly revisits her trauma, dreams, and fantasies, there’s a loving woman at their center. It’s her past self, fighting to break out of her pain and reconnect with the love and security she lost. Even if not all the details of her loss is explained, it’s effectively devastating to see her struggle with its aftermath.

In addition to its mind-bending narrative, the visual style of “Knocking” is equally as striking. Cinematographer Hannes Krantz luxuriates his images in burnt reds, velvety greens, and golden sunset yellows, darkening the movie’s color palette without taking away its vibrancy. Both pale fluorescent lights and sunlight seeping in through tan curtains cast a pall over Molly, as if she can never escape from clouds looming overhead. A number of camera angles and movements feel especially unsettling, not just in an off-axis tilted angle kind of way, but like when the camera pans over Molly’s head in a way that resembles the motion of a brain scan, as if the audience was sharing her out-of-body experience. Or there's the dizzying close-ups of a frantic Molly with what looks like a GoPro, which enhance what feels like a claustrophobic episode, the outside world blurring around Molly, leaving her more dazed and uneasy as ever. Martin Dirkov’s haunting score accompanies Molly’s journey, amplifying its eerie tones as her behavior becomes erratic.

While the nonstop sound of knocking is its own unnerving type of horror, many things trouble Molly. She is haunted by her past and uncertain about her present, regularly telling her concerned therapist that she’s okay when she’s struggling. It’s a shaky reassurance. Her eyes notice clues, like a scrawled cry for HELP in the elevator or a couple fighting outside her building, and these signs become confirmations of her suspicions. Then when she goes to get help or takes matters into her own hands, it feels like she’s not believed because of her previous mental illness and because others think she’s a woman and imagining things. “Knocking” is so frightening because the combination of these elements causes her to lose even more control, a distressing escalation that doesn’t stop until the movie’s end.

Now playing in theaters and available on VOD on October 18. 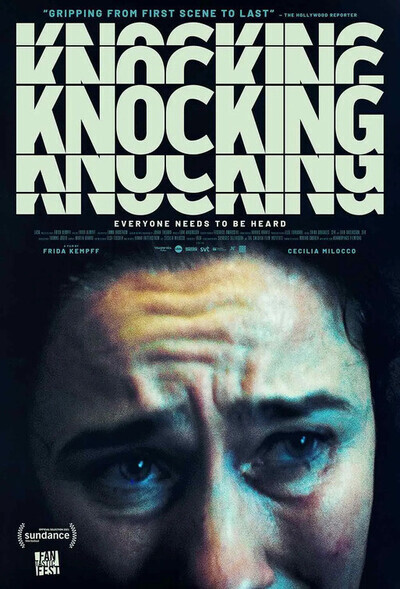 Albin Grenholm as Per