If you want to see the 1992 Los Angeles riots turned into a bad sitcom and an even worse Lifetime movie, buy a ticket to “Kings.” The title is supposed to refer to Dr. Martin Luther King, Jr. and Rodney King, but the former is never mentioned and the latter is only seen in the infamous footage of his assault by the LAPD. A better title for this tone-deaf disaster would have been “Love Among the Ruins,” because writer-director Deniz Gamze Ergüven is more concerned about the goofy romantic chemistry between Halle Berry and Daniel Craig than the racial powder keg of an environment surrounding them.

In fact, I don’t think Ergüven is interested in exploring the complexities that led to Los Angeles erupting on April 29, 1992. Instead, using recreations and actual real-life footage, she presents scene after scene of violence with little context. Her paper-thin Black characters are seen murdering, stealing, setting fires and being killed, yet not once does Ergüven interrogate the underlying anger at injustice that motivated them. They’re just pixels in a video game of destruction. Only Craig’s Obie Hardison is allowed moments of conflicted emotion and heroism. To quote the film’s dialogue, he’s “the only White person in the neighborhood.”

Craig’s Obie is the drunk who lives opposite Berry’s Millie. Obie has a penchant for shooting a shotgun out of his window when the neighborhood gets too rowdy and loud. He also throws large appliances like washing machines off his balcony when he’s really pissed off. How an Englishman or an Aussie or whatever Obie’s supposed to be wound up in South Central is never explained. That story would have been fascinating, not to mention useful, because Obie’s being positioned as a savior of sorts. Craig is currently the latest iteration of James Bond, but “Kings” sees him as more of a MacGyver clone. Late in the film, he manages to escape from danger using a rope made out of two pairs of denim pants and a shoe.

Obie hates kids. His potential love interest, Millie has more children than the Old Lady Who Lives In a Shoe. But “Kings” never specifies how many of them are hers and how many are wards that she took in out of the goodness of her own heart. Hell, some of these kids don’t even have names, but it’s clear that Millie loves them all unconditionally. In addition to keeping her charges out of trouble, Millie makes Bundt cakes as a means of generating income. Every day is a struggle that would wear down the strongest of women, yet not once does Millie look anything less than gorgeous. Even at her most stressed out, Millie’s elegant coif never stops bouncing and behaving.

Ergüven is even worse at maintaining tone. “Kings” repeatedly jumps from horrific violence to slapstick absurdity. For example, at the height of the riots, one of the characters in the aforementioned love triangle is wounded, resulting in a panicked race against time through streets ablaze with fire and strewn with debris. This is intercut with the physical comedy of Obie and Millie attempting to escape the pole to which they have been handcuffed by an angry cop. While one of her characters bleeds to death, Ergüven has Obie smooching on Millie after telling her to take off her pants. “You can leave your panties on!” he tells her. Meanwhile, three of Millie’s bad-ass kids are in the same lot driving Obie’s car. All this leads to a tragic ending “Kings” is unwilling to deal with honestly—or at all. This last scene is proof that Ergüven sees her characters as Others to be gawked at rather than real people.

“Kings” starts out rife with promise. In the film’s only effective sequence, Ergüven recreates the real-life murder of Latasha Harlins, an unarmed teen shot dead by a convenience store clerk. The scene is so powerful that one expects a shocking treatise on everything that led up to the riots and their aftermath. But no. The only time reality intrudes into the film is when we hear TV’s in the background covering the Rodney King case. It would have been nice to get some insight from the characters about the chain of events; without this, almost every person of color is reduced to a one-dimensional criminal.

While the littlest of the children have natural charisma, nothing good comes from the actors who are supposed to know what they’re doing. Berry overacts horribly, most noticeably in a scene where Millie has an inexplicable screaming fit when she sees a moderately sized roach. Craig is lost in the weeds because he has nothing concrete to play. He threatens to shoot the kids at one point, but later dances Da Butt with them while singing James Brown's “Say It Loud I’m Black and I’m Proud.”

Twenty-five years ago, playwright Anna Deveare Smith spoke with numerous residents of Los Angeles after the riots to get their stories. The result was Smith’s brilliant “Twilight: Los Angeles, 1992.” According to the press materials, Ergüven did similar research, a fact I’m sure will be used to counter my argument that “Kings” is clueless about its subject matter. I’ll stand by my statement, however; Just because you do a ton of research doesn’t mean your term paper doesn’t warrant a D-minus. “Kings” deserves an F. 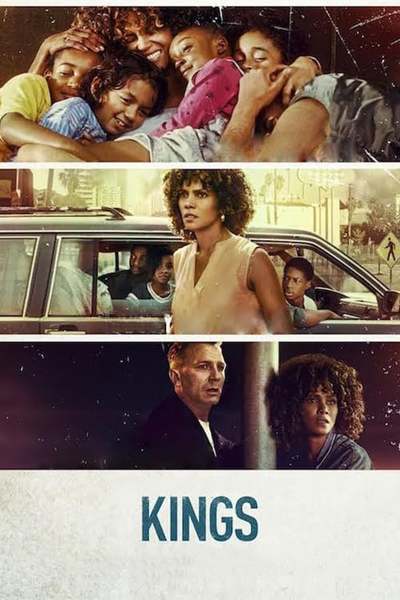