There is one good joke in the movie “Karen,” a bland piece of schlock that tries to capitalize on the modern term used to identify aggressive, racist, self-victimizing white women. It’s a line about how Imani (Jasmine Burke) and Malik (Cory Hardrict), a young Black couple who have moved to a suburban neighborhood, have a Karen neighbor actually named Karen. “So Karen IS a Karen?” asks one of Malik's incredulous friends, who was previously kicked out of a restaurant after THIS Karen complained about him laughing with another friend. Written and directed by Coke Daniels, "Karen" can only pat itself on the back for making a movie about the tyranny of a Karen, but it doesn’t bring any critical thinking to its own conversation.

We’ve previously seen a lot of Karens in clips—feverishly calling the police on people of color for non-crimes, causing a stir related to their entitlement, deflecting their racism with claims of not being racist. Daniels’ script has simply collected these ideas to create a feature-length adaptation of someone we know from the modern TV show that is a social media feed. He plays to expected beats, while thinking that by simply basing a story on a Karen that the outraged entertainment will write itself.

Taryn Manning stars as the titular monster, and from the beginning it’s all about micro aggressions and nagging requests meant to control and dehumanize Malik and Imani. She pushes boundaries of what a good neighbor does, she disrespects them with a smile, she sexually objectifies Malik, she tries to make Imani feel alien about her name. It’s telling that not even the role is amusing to watch as the grotesque clown show that you think it’s going to be with every awkward interaction, or any time you get to look real hard at Manning's jet black hair perched atop her tiny frame. Her performance itself is an empty provocation, and like the rest of the movie would have fared better if her director dared to go over-the-top and let any gaudy ideas take over the literal ones. She’s many noticeable levels lower than the character could be to still make its point, for all of her fury, entitlement, and overflowing whiteness, and Manning simply plays it so that we recognize her impression.

There's nothing surprising about this movie, and maybe Daniels thinks that’s the point, and a clever one. Yes, of course she’s friends with cops, who help racially profile and beat up on Malik, among others; of course she’s going to say something offensive to Black people and then gaslight them for being offended; of course she actually hates the neighbors that she speaks to in paper-thin niceties. “Karen” doesn’t even have to preach to the choir about this stuff, because this is all just part of the character. She's as racist as Batman is rich, and Daniels gets no points for what little associations he makes.

The movie is also clueless about to how be a thriller, in either a serious or tongue-in-cheek way. It has an obnoxious habit of moving the camera from side to side when characters are sitting and talking, trying to create a sense of momentum during Daniels’ numerous flat sequences. And when the film's final ten minutes call for more overt terror, it’s all about rain and heavy red filters, and a couple barely choreographed scuffles. Even with the most basic forms of gratuitous schlock, “Karen” does not try.

“Karen” unwittingly reveals the emptiness in basing a script on ridiculing its central monster, as sweet as her tears may be. His emotional saga for Imani and Malik, which climaxes with a monologue about why "All Lives Matter" is nonsense, is even more revealing of how deficient this project is. It's all about innocuous button-pushing, while Imani and Malik become side characters whose tableau of trauma is presented as wholesale plot points. What their experience represents isn't part of some in-your-face, self-aware statement that comes from an exploitation film, it's just straight-up exploited. 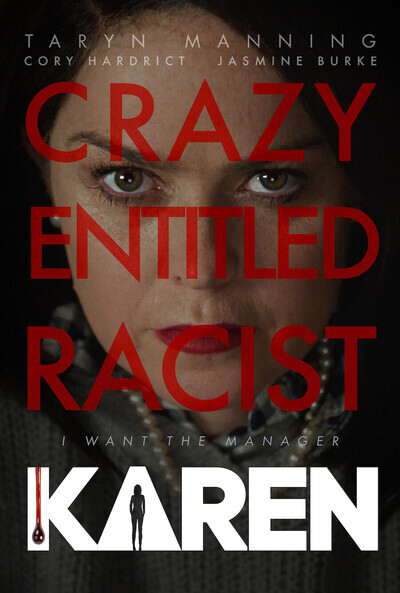