Her unconventional stories and eccentric humor might suggest otherwise at first glance, but there is always profoundly heavy stuff at the heart of Miranda July’s work. Our cavernous hunger for meaningful connections lies beneath the quirky indie guise of the rapturously funny “Me and You and Everyone We Know.” Existential notes on yearning for purpose charge the idiosyncrasies of “The Future.” And one doesn’t need to look much further than everything July has been doing virtually and on social media, especially since the Covid-19 quarantine started in earnest back in spring, for further evidence into her chief creative concerns. By inviting crowds into her process in small doses, the fiercely original multi-disciplinary artist has been out there to examine humankind’s consequential bonds—how individuals forge those ties in the absence of physical contact, what they might get out of them, and why we all need others like air and water.

July’s best and most mature work to date, the often hilarious and gradually heartbreaking “Kajillionaire” almost recapitulates the writer/director’s above-mentioned experiential artistic interests, digging deep into the world of a twenty-something who has been consistently denied any form of sincere human touch and connection her entire life. She is the awkwardly postured Los Angeles dweller Old Dolio (a sneakily affecting Evan Rachel Wood), sporting baggy jackets, peculiar track suits and a longer-than necessary mid-parted hair over her permanently sullen face and slouchy shoulders. Stuck in a cycle of petty crime with her equally bizarre parents Theresa (Debra Winger) and Robert (Richard Jenkins)—of course they are bizarre, having named their child “Old Dolio” as if to punish her from birth—the helpless daughter cheats her way from one small-time theft to the next, sharing all the minor gains with her folks three-ways, without attaining a shred of intimacy or term of endearment in return.

July doesn’t drop in any clues here and there to help us understand when or why exactly the grifter duo Theresa and Robert chose to lead this stick-it-to-the-man lifestyle, or how they became so incapable of showing affection to their offspring whom they seem heartlessly detached from. Instead, the filmmaker earns the viewer’s trust and consent straightaway through her confident sense of rhythm and sure-handed world-building. Seen through Sebastian Winterø's fluid lens, July’s trio of characters move through, blend in, and interact with their surroundings in such a smooth and diligently fabricated fashion that we completely buy their unusual authenticity from the get-go, all the way from the opening moments of the film when the family launches into one of their routine post office heists. With hysterical steps involving a somersault here and a tumble there (supposedly to avoid security cameras), the clumsily willowy Old Dolio barges into the building just to rob the mailboxes adjacent to theirs for things as worthless as a tie.

Elsewhere, their elastic motions keep them away from the eyes of a desperate landlord, a weak-willed but kindly man who gives his poor tenants the final ultimatum to pay their overdue rent in a few weeks. Not that the light-starved residence in question is habitable by any standards. Located inside a factory-like space, its walls frequently leak a pink, soapy substance that the trio regularly collects in buckets with such a sense of duty and normalcy that the whole scene looks like a weird art installation that satirizes the impossibility of urban living. (Notable production design by Sam Lisenco somehow manages to make all such oddities look effortless.) Still, with no intention to lose their cheap accommodation, the family plans their next “big” con, aiming to scam an airline for insurance money on lost luggage.

Enter Melanie (an effervescent Gina Rodriguez, the film’s secret weapon), a bubbly and curious personality that swiftly gets attracted to the trio’s unorthodox ways in order to shake things up a bit in her own square existence. Everything that Old Dolio isn’t—well-groomed, assertively feminine, independent, and surrounded by warmth in her own family—Melanie first awakens a sense of jealousy in Old Dolio, followed by a realization of all the tender, emotionally reassuring and even sexual sensations the young woman has been missing out on the whole time. Could Melanie possibly become someone to validate her, like a friend, sister, or maybe even lover? Could she retroactively grant Old Dolio that maternal compassion that the poor recluse only saw at a parenting class that she once attended to make a few quick bucks?

Where July takes the story—an overwhelmingly heartrending and unexpected place—might just wreck you, especially in the ongoing days of quarantine where we’re all taking notice of the real currencies of the world, like a hug, a passionate kiss or a word as simple as honey from a special someone. Admittedly, July shortchanges Melanie a touch—we feel slightly cheated when film’s MVP doesn’t prove to have that satisfying a journey of her own. Still, the chemistry between Wood’s deep-voiced, reluctant outcast and Rodriguez’s scrappy, vivacious go-getter is so divine that their joint passage is what ultimately sells and counts in “Kajillionaire.” By the end, it all feels like life-affirming stuff. 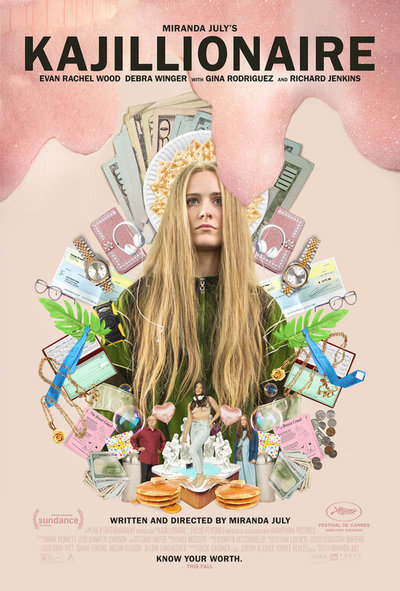 Rated R for some sexual references/language.