Jonathan Demme opens his fantastically entertaining “Justin Timberlake and the Tennessee Kids” by introducing us to the backup players and musicians who have supported the pop star on this two-year tour, but make no mistake, this movie is about the entertainer at its center. While Demme’s camera never forgets to allow the other partners in pop to share time, he always comes back to Timberlake, one of the most purely enjoyable musicians around which one could center a concert film. His energy is infectious and his joy about what he’s been blessed to do for a living is contagious. So, while he says to his dancers “Look to your left, look to your right—that’s who this show is for,” it’s really a film that elevates his status, placing him next to other legends that the masterful director has filmed in concert movies, like David Byrne and Neil Young.

It's great that Netflix will allow more people to see “Justin Timberlake and the Tennessee Kids” than would be able to if it got the standard, major-city arthouse release that greets most concert films, but it was clearly designed for the large-format theatrical experience. Don’t watch it on your phone. Watch it on the biggest screen in your house. And turn it up loud.

Demme’s film captures Timberlake’s last show of the two-year tour, which takes place in a location perfect for the level of theatricality on display here, Las Vegas. With a massive number of people on stage supporting him and dressed in suits and ties that look classier than anything you own, Timberlake opens the show by emulating an old bandleader, someone who could command a crowd with every dance move and falsetto note. And he slyly sets the stage for his own show, opening with a traditionally entertaining version of “Pusher Girl” that then segues into a hip-hop version of the same song. Timberlake has always excelled at playing both sides of that entertainer persona—the one that can croon a traditional love song that grandma would love and then move right into “Sexy Back.”

For 80 or so minutes, Demme and cinematographer Declan Quinn, who has been working with Demme for decades and shot two of the director’s Neil Young concert films, move fluidly with Timberlake utilizing camerawork that's deceptively brilliant. Notice how often they keep enough distance to let us take in the entire stage show, especially during extended dance numbers. Notice how Demme avoids the instinct to cut rapidly that we see so often in modern concert films, understanding that fluid long shots work much better than to cut back and forth across the stage. Demme’s efforts are in perfect rhythm with his subject, even down to how seamlessly he edits the show itself, excising several numbers that I hope someday make it to a Blu-ray special features section (I’m crestfallen that they dropped “Cry Me a River,” for example).

Of course, what Demme and Quinn understand most of all is that they never get in the way of their star. It’s about projecting his presence, and what people feel at his shows, through a camera. It's something that Demme, the director of the best concert film of all time (“Stop Making Sense”), knows how to do better than pretty much anyone. Timberlake’s show ebbs and flows, brilliantly alternating high-paced numbers with others that bring the flow down again, until it’s impossible not be entertained. He also mixes up his own songs just enough to make them more interesting than just watching a collection of his music videos, including fantastic versions of “Rock Your Body,” “What Goes Around” and a killer take on “Mirrors.”

Clearly, I’m a fan of Justin Timberlake, and I can’t divorce myself of that fandom to answer whether or not this would completely work for those who aren’t. But I really do think there’s enough here for anyone to appreciate, even those who can’t stand pop music. Appreciate “Justin Timberlake and the Tennessee Kids” as a chronicle of a man giving his absolute all to entertain those who pay to see him. And appreciate it as a piece of stellar filmmaking, a class in how to shoot a concert film in a way that doesn’t just chronicle what happened on that chilly Las Vegas night but that matches its subject’s personality. Demme’s concert films aren’t just recordings of events—they’re cinematic embodiments of their musicians, capturing in a moment an energy that transcends time. 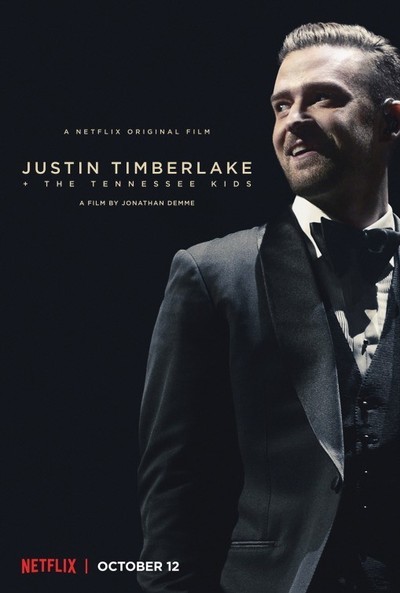 Justin Timberlake as Himself